I’m putting this out a few days later than I planned because I got behind in updating it. I didn’t so much lose track of the reading list as I decided to put sleep ahead of the updates.

Part of the issue was that I did an in-person craft workshop this month, which meant I read a lot of great manuscripts, some of which I hope you’ll see in print some day. I also had to finish reading the two new books that I had assigned for that workshop. As my students already know, I both loathed and liked one of the books, based on Pride and Prejudice–which I do loathe. Turns out the P&P storyline just isn’t for me, but the author did such great stuff with setting and secondary characters that I want to read her other works. If I find one of those I like, I’ll let you know.

The other book for the workshop was just poorly done, which is unfortunately, because it started well. I’m happy to report, though, that the workshop itself went well, and I read a lot of good stories from the writer-students. I enjoyed that a great deal.

I also had to do a lot of work on a Kickstarter that went live on October 2. The prep all gets done ahead of that, and that ate up the last 2 weeks of September’s nonwriting time.

You folks would probably be interested in that Kickstarter, because it’s all about reading. You know that I do a special holiday recommended reading list each year. If you like the list, you’ll love the Kickstarter. It’s a calendar of stories. If you sign up, you’ll get one story per day from November 28, 2019 (American Thanksgiving) to January 1, 2020 (New Year’s Day). Two of the stories are original holiday stories from me. The rest are original holiday stories from some of my favorite writers. And if you back the Kickstarter, you’ll also get a new Santa Series Kristine Grayson novel. All in time for your holiday reading. So click this link and head over to see if the project interests you.

Here’s what I liked in September. 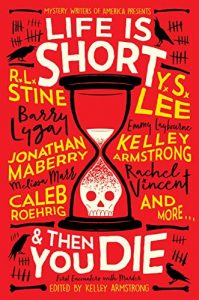 Armstrong, Kelly, editor, Mystery Writers of American Presents Life is Short And Then You Die: First Encounters With Murder, [Imprint], 2019. I found this book at Barnes & Noble, and honestly, I picked it up to show Dean how ugly traditionally published covers are. Then I looked at the cover, and saw what the book was, and wondered why I hadn’t heard of it before, because I love the MWA anthologies. The book had just come out—that was part of the issue—but some of it was that the book is marketed as YA, and apparently, wasn’t showcased in the usual venues because of it. (The interior is even worse than the cover. As I tried to type in author names, I’d get them wrong because the font used as the byline font is almost unreadable. Yeah. Always good to publish traditionally. They know what they’re doing. Cough, cough.)

As with any anthology, the stories are uneven. You’ll see the ones I loved in this reading list. I only skipped one story, though. The rest all had something to recommend them, even if I found some the early ones predictable. I didn’t care, because the voices were so strong throughout. If you’re looking for good mystery short fiction, you’ll like this anthology.

Bart, David, “Night of the Living Dog,” Mystery Writers of American Presents Life is Short And Then You Die: First Encounters With Murder, edited by Kelley Armstrong, [Imprint], 2019. The story begins with pizza and scared parents, and then goes on to include a stray dog, and a kid with a lot of heart. Sometimes you can’t say much about a story, and this is one of those.

Franze, Anthony & Lancet, Barry, “A Different Hero’s Day,” Mystery Writers of American Presents Life is Short And Then You Die: First Encounters With Murder, edited by Kelley Armstrong, [Imprint], 2019. Kyle is taking the subway to school, clutching a report that diagnoses him as being ADHD. He’s reading through it, thinking about the negatives, when…well, all of his skills because he’s ADHD come into play. It’s a marvelous story that questions why we think normal is good. Nicely done.

Laybourne, Emily, “First Party Back,” Mystery Writers of American Presents Life is Short And Then You Die: First Encounters With Murder, edited by Kelley Armstrong, [Imprint], 2019. Drew has avoided parties for most of the year. He finally comes back, only to experience something that makes everything worse. Another of those stories I can’t discuss in depth, but I think you’ll like. 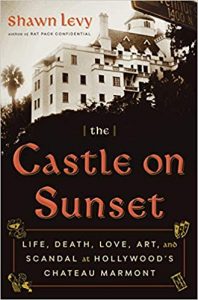 Shawn, The Castle on Sunset: Life, Death, Love, Art, and Scandal at Hollywood’s Chateau Marmont, Doubleday, 2019. I didn’t want this book to end. It was well written, dishy, filled with history, and full of fun details. The Chateau Marmont is a famous hotel in Hollywood. It’s where John Belushi died, for those of you of a certain age. But it has a long and storied history, which Levy chronicles.

Reading this book felt like reading a well-written biography of a person. Lots happened in and to the hotel, and I found myself rooting for it all the way along. Levy begins with the birth of the hotel, and unlike a biography, does not end with the death of the hotel, which still stands after 90 years. Lots of fun. Pick this one up.

Maberry, Jonathan, “What I Did On My Summer Vacation,” Mystery Writers of American Presents Life is Short And Then You Die: First Encounters With Murder, edited by Kelley Armstrong, [Imprint], 2019. As training in the family business which is security, Dylan is guarding a little kid. The job should be easy, but it’s not. And the story should be predictable, but it’s not. It’s also a thriller, so take a breath before you launch into the story itself because you won’t breathe until you’re done.

Rendahl, Eileen, “Concealment,”  Mystery Writers of American Presents Life is Short And Then You Die: First Encounters With Murder, edited by Kelley Armstrong, [Imprint], 2019. The story starts with a fairly realistic school shooting drill and veers sideways quickly. Lucy freaks out because of something she sees, which unlocks memories of her childhood, important memories, it seems. By the time I figured out the ending, I should have figured out the ending. The story’s strong and one of the best in the volume.

Roehrig, Caleb, “Enemy Lines,” Mystery Writers of American Presents Life is Short And Then You Die: First Encounters With Murder, edited by Kelley Armstrong, [Imprint], 2019. I almost skipped this story. I wasn’t in the mood for a WWII story, and I figured it would be dark and sad. It is dark, but not sad. It’s a spy story, set among the fighters of the French Resistance, and oh, my, the descriptions of food… and everything else. I’m glad I read it after all.

Schumacher, Geoff,“Water, Water, But Not Everywhere,” Desert Companion, August, 2019. Las Vegas suffers from flash floods in the summer, and in the past, they had a terrible effect on the city. But in the last 30 years or so, the city has built a system to manage the floods. Sounds like a dull article, right? It’s not. It’s fascinating.

Sigal, Jake, “Use ‘Fail Bricks’ to Build Walls of Success,”, I3: It Is Innovation, May/June 2019. One of the perks of going to the Consumer Electronics Show is that you end up getting a lot of free stuff afterwards. Some of those free things are magazines, including one called I3 or It Is Innovation. I scan a lot of this stuff, but I stopped and read Jake Sigal’s Advice for Entrepreneurs column. Sigal is one of the (many) tech wunderkinds who came out of the the previous decade. He started something called Tome and Livio and has quite a following for his various ideas.

This piece is about using failure properly. I hadn’t read anything that took the attitude of making each failure into an actual building block. I like it. Take a look.

Soloway, Jeff, “Murder IRL,” Mystery Writers of American Presents Life is Short And Then You Die: First Encounters With Murder, edited by Kelley Armstrong, [Imprint], 2019. A lovely story about a kid who would rather stay in his room working on his computer (for good kid reasons) than go out into the world. But someone he knows online gets murdered, and a girl asks him to get involved, and he does, actually heading into the real world. (IRL=in real life) The interaction between the online world and the real one is lovely, and so are the characters. One of my very favorites in the anthology.

Walker, Joseph S., “Gnat,” Mystery Writers of American Presents Life is Short And Then You Die: First Encounters With Murder, edited by Kelley Armstrong, [Imprint], 2019.  A bullied kid, some shady characters, a gun. You think you know how this one will end…and you’d be wrong. I was. Nicely done.

Witcher, T.R. “In Search of a Vegas Style: Why Don’t We Look Like Palm Springs?” Desert Companion, August 2019. An article on the architectural history of the city seen through the Mid-Century Modern style. Palm Springs influenced us, but we had a bit of influence ourselves. Fascinating. 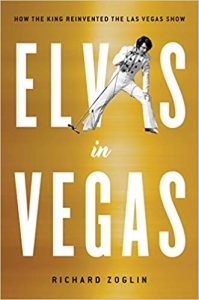 Zoglin, Richard, Elvis in Vegas: How The King Reinvented The Las Vegas Show, Simon & Schuster, 2019. I loved this book. It’s more of an entertainment history of Las Vegas than it is a book about Elvis. (Thank heavens.) In fact, when the book gets to Elvis, in the last few chapters, it loses its momentum.

The reason for that lurks in the acknowledgements. Turns out that Zoglin wanted to write about the Las Vegas entertainment scene, and his editor told him to focus on Elvis’s 1969 comeback concerts at the International as the heart of the book. Clearly, Zoglin’s heart is elsewhere. I learned a lot about my adopted city, as well as the early headliners, and some of the early neighborhoods.

The “reinvention” part is brief, as is the part that discusses the modern era. Zoglin seems to have no sense of Las Vegas now, and no respect for the performers who came into the city in the past 15 years or so. But that’s a minor fault in a fascinating book. If you like to read about entertainment history, then this book is definitely for you.