A New Novel For The Holiday Season

A New Novel For The Holiday Season 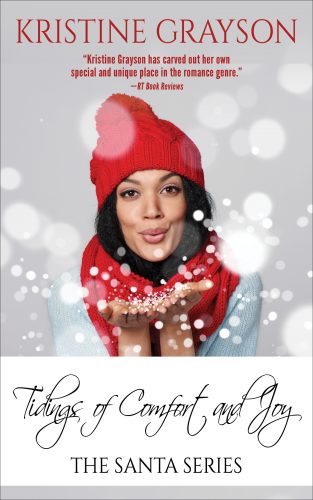 I guess I went a bit overboard preparing for this holiday season. First, I did the Holiday Spectacular. You can sample some of the stories here and here, and if you like what you read, you can still subscribe, and get 35 stories. You won’t get them in 35 days now, since the parade of stories started on Thanksgiving, but you’ll get the bulk daily, and a big story download on the Monday after you sign up.

I wrote two stories to go into the Spectacular. And I started a Kristine Grayson novella in my Santa Series, thinking the novella would be a Kickstarter reward.

Um…the novella turned into a novel, and yes, it did become a reward for Kickstarter.

Now, though, all of you can read it.

Dallas Demaris unites magic with technology. She specializes in computers. But when her company orders her to go to the North Pole to help Claus & Company fix their outmoded computer system, she goes grudgingly.

Dallas hates how Santa runs his business, and she tells everyone, including Lothario Johanssen, the handsome man who invented the machine that runs the North Pole.

Lothario dedicates his long life to the machine. He knows the system better than anyone—including Dallas.

But what if Dallas discovers something that Lothario missed? Can they find a way to work together to fix the critical machine before December, before its malfunction ruins Christmas for millions of children?

Kristine Grayson once again brings romance and fantasy together as only she can do.

I’ve had the idea for this Grayson piece for decades, which is probably why my rebellious mind insisted the story was a novel (after lying to me, and saying it was a novella).

I know many of you love holiday reads. I had a great deal of fun writing this one. I hope you have as much fun reading it.