Well, my evil plan against myself worked. I’ve been behind putting my Recommended Reading List together for January (and February). Many of you have asked for it anyway. So I schedule it ahead of time, and usually keep track of that. This month, it went live with what I had, not with what I’ve read. What’s missing from the list…and there’s a lot, as you can tell from the notes above, will show up in February’s list.

Crazy, crazy month with lots of reading, much of it for the Science Fiction Craft workshop that I taught. The writers—sixteen, which was four over my maximum—were spectacular, which means I have to spend more time with their work, not less. Loved every second of it.

I assigned a reading list, and some of what I discuss below comes from that reading list. My greatest disappointment on that list was the Nebula Awards Showcase 2019, not because of the stories, which were all interesting (and I recommend a few below) but because the paper version is such a mess. Whoever copyedited it had no idea what they were doing and even introduced errors. The running headers were wrong, and no one knew how to assemble a copyright page. I have no idea why SFWA went with such an unprofessional small press for the volume, but if you are interested in the book, I recommend the ebook version. I haven’t looked at it—and some of the students said it was bad also—but it can’t be as badly designed as the paper book. I normally let these things slide, but this book was terribly produced, and I don’t want you to think I am recommending that you spend your hard earned dollars on it. If you can find the recommended stories elsewhere, purchase that volume instead.

Some of the recommendations here are from the reading list I gave them. Some are from other things. And a few are magazine works that I found interesting.

Here’s (some of) what I loved in January. 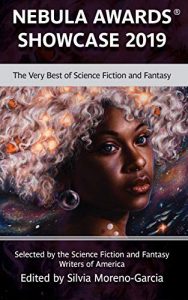 Bowes, Richard, “Dirty Old Town,” The Nebula Awards Showcase 2019, edited bySilvia Moreno-Garcia, Parvus Press, 2019. I have loved Rick Bowes’s work since I first saw his stories back when I was editing Pulphouse thirty years ago. He was a stunning writer then, and he’s even better now. This story set in a barely alternate South Boston from sixty years ago, features some subtle magic and incredible characters. The ending made me tear up. Well worth every moment of your time.

Glaspell, Susan, Trifles. Found this on my way to other things, and ended up reading it in its entirety because I was familiar with Glaspell already. She wrote an incredible short story called “A Jury of Her Peers,” which I read in A Moment on The Edge, edited by Elizabeth George. What I didn’t know was that Glaspell, who wrote these pieces a hundred years ago, was considered one the two most important playwrights of the day (the second being Eugene O’Neill). This play is breathtaking, a true gem. If you’ve never heard of Glaspell, look her up. The fact that she was nearly lost from our collective conscious is a crime; that scholars brought her back, a blessing. Enjoy!

Price, Jenny, “A Star Was Born,” On Wisconsin, Winter, 2019. In 1969, André De Shields was a theater student at the University of Wisconsin, who had a lot of ability and a dream. But he lacked money. So when the opportunity came to go to Chicago to audition for Hair, he decided he couldn’t go. And then his friends pooled their money, bought him a bus ticket, and sent him to Chicago. The rest, as they say, is history. De Shields went on to an illustrious career in the theater, including a Tony this year for his role in Hadestown. I watch the Tony’s every year, and I remember his inspiring speech, delivered in his resounding voice, and I had no idea we had graduated from the same school.

Nor did I know that I had heard of him without hearing of him. You see, De Shields was part of a legendary play that people were still talking about a decade later, when I heard about the show. He was part of a theater production of Peter Pan (as Tiger Lilly of all things), known as “the nude Peter Pan.” I’d heard of it, I knew folks who had seen it and folks who had wanted to see it and a friend who claimed(s) he helped write it. But I had no idea that the nude production was banned from the University after one showing (and found another home), nor did I realize that it was a protest play, with the Lost Boys as hippies, Captain Hook the infamous mayor of Chicago, and the Black Panther party as stand-ins for Neverland’s indigenous people. Which makes sense in the context of 1969, although maybe not now. Nonetheless, the show got remembered, not for its protests, but for the nudity. And that is…well, irony, in some ways, because Hair was also notorious at the time for its onstage nudity.

Anyway, read this. It’s a story of friendship and persistence and sheer warmth.

Yoachim, Caroline M., “Carnival Nine,” The Nebula Awards Showcase 2019, edited bySilvia Moreno-Garcia, Parvus Press, 2019. Writer friends who attend the annual Anthology Workshop are probably stunned that I even read a story with the word “carnival” in the title, but I did, and I loved it. The world-building here is phenomenal, the point heartbreaking, and every single detail perfect. I have a hunch this story will stick with me for a very long time. It’s brilliant.