The weather has become quite lovely here, and I have made it a point to read every night on my balcony. I can’t tell you what a balm that has been for my soul.

Much of what I’ve read I can’t recommend, including an Edgar-nominated novel that was supposed to be “gothic” and “feminist” and was neither. The heroine never did anything except get rescued (and be stupid) and the killer was a woman who killed other women who had affairs with her husband. In fact, the hatred of women was so thick in this book that it made me question the judgement of everyone who thought this book was a)good and b)about strong  women. So I didn’t recommend it. Yuck.

Also read a novel by one of my favorite bestsellers, and debated putting it on here. Then I realized it took me one day to read the first half and three to read the second. Yeah, I was a little bored. So I’m not recommending it.

But I’ve found a lot of great things to read otherwise, including the Scott Kelly book below. All in all, I enjoyed my time on the balcony, and found some wonderful things. Here they are:

Carter, Geoff, “Coming Back Together,” Las Vegas Weekly, April 30-May 6, 2020. The subhead of this piece is “The Empathy We Feel Now Could Make All The Difference When Vegas Reboots.” Or, when our communities reboot. Read this. It’s short, and important. 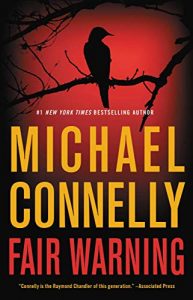 Connolly, Michael, Fair Warning, Little, Brown, 2020. Michael Connolly’s work has gotten uneven for me. Unfortunately, his Renee Ballard books don’t work for me at all. They seem to be written by someone who sees women as alien creatures who must be “understood” rather than someone who genuinely understands women. (To the point, in the first book, where Renee explains something to herself in narrative, which had to be what some woman told Connolly so that he would understand what it is to be female in that particular situation. It was irritating.)

Unfortunately, the effect of reading those books is that they’ve made me hypersensitive to his female characters. On the plus side, they’re uniformly strong and often they save themselves (although Ballard didn’t, book one). On the negative side, they’re inexplicable to the male characters, and will get mad for no apparent reason. Which happens in this book at the end. Which was really irritating.

But I decided to ignore that in recommending the book, because the rest of the book is fascinating. Connolly revives an old character from novels of years ago, a journalist. Only now his character is no longer with a prestigious paper, but with a website, struggling to stay alive through donations and partnerships with the old media. The case the reporter stumbles on is a good one, and the journalism stuff is so fascinating, I almost bought the book for a friend…until I saw the ebook price. Yep, that stupid $15 price point. So I recommend this, but do realize that the ebook is wildly overpriced. 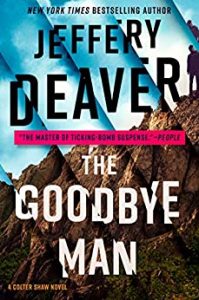 Deaver, Jeffrey, The Goodbye Man, G.P. Putnam & Sons, 2020. Ever since this pandemic began, I’ve been craving mysteries. No great surprise there. I want order on this chaos. So I was happy to get Jeffrey Deaver’s latest (which I had preordered). And then…crap! Discovered it was about a cult. Which I really did not want to read about.

But I soldiered on, because I love Deaver, and the mystery I had just finished was awful (see above). I was well rewarded. Yes, the resolution of the cult was too easy (I don’t believe the followers would have done that), and I saw the surprise twist a mile away, because I expect twists from Deaver, and the actual ending sequence was a bit confusing, but I. Don’t. Care. I read it fast, and loved it, and want another Deaver book I haven’t already read. Right. Now. 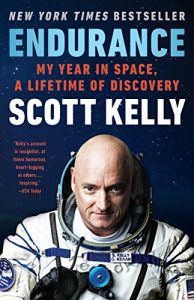 Kelly, Scott with Margaret Lazarus Dean, Endurance, Knopf, 2017. This was absolutely the most perfect book to read during the lockdown. Endurance is about Kelly’s year on the International Space Station (and his life and being an astronaut). Every time I felt hemmed in or frustrated, I thought about Kelly, in the ISS, unable to go outside without suiting up for 2 hours, and then being at complete risk of dying. And having CO2 problems. And eating food from tubes. And not taking a shower or using a proper toilet…for a year. All in the name of exploration and science. Which got me thinking about all those other people who did such things for science.

The book is very well structured, well written, and at points quite riveting. I recommend it highly.

And a neat feature of this book? Kelly went from being a poor student with no real interest in his future to an astronaut because he found a copy of The Right Stuff. Yep, he credits a book with changing his life. He mentions it in the text and the afterward. Nifty, huh? 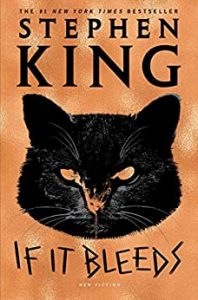 King, Stephen, If It Bleeds, May 2020. Normally, when I recommend a collection, I point out my favorite pieces in the collection separately, and leave out the stories I don’t like. But I liked every story here, and I’m not sure which was my favorite. I read a review of this, and they said it was “expected” of King, but I don’t think so. The second novella, “The Life of Chuck,” is written in a fascinating style that really accents the story. It also has had me thinking about it ever since I finished it (and even while I was reading it). The title novella is wonderful, in his mystery series, and I thought it would be my favorite, but it’s not. They’re all good. I love it when King writes novellas. I think he’s a master of the form. Pick this one up and enjoy. 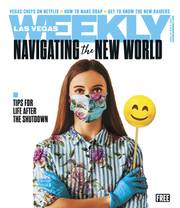 Las Vegas Weekly, April 23-29, and April 30-May 6, 2020. Las Vegas Weekly is a free magazine that has, in the past, been the barometer for all things entertainment in Las Vegas. Yes, there’s always news, and important pieces on things like the election, but there’s usually a huge section on night life and concerts and plays and everything that makes Vegas Vegas.

During the lockdown, the Weekly has evolved into necessary reading. From articles about what the future might be like, not just for Vegas, but for everywhere to some valuable how-tos, the Weekly seems to stick the landing every single week. Check the link. I’d recommend the April 23 issue in particular. There’s a lot of things that will apply to your town as well as Las Vegas. And if you want to see how to pivot properly in the middle of a crisis, look no farther than this publication. Quick, Amanda, Close Up, Berkeley, 2019. The latest in Amanda Quick’s light romantic suspense series about a hotel near Hollywood in the 1930s. Everything here is unbelievable, all of it makes as much sense as a screwball comedy, and it has all of the same attractions as well. Quick (Jayne Ann Krentz) put all of the elements together to come up with a novel that’s so much fun, I wanted the next one Right Now. I read the first two as well. I’m not even going to try to explain the plot. There is a great dog in here who eats better than I do, lots of marvelous cars and cliffside driving, and evil villains, handsome men, movie stars, and a kickass heroine. What more could you want?