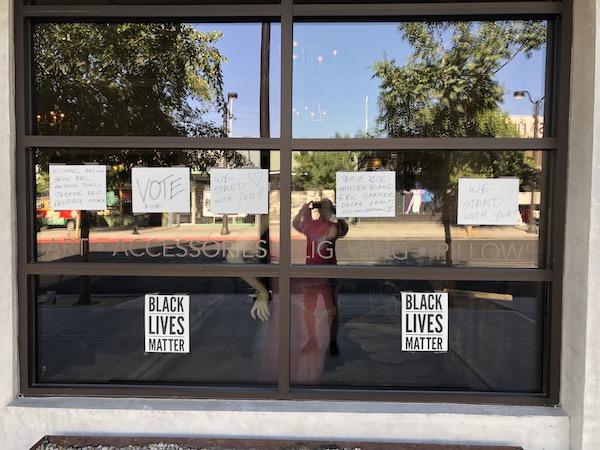 Finished my morning routine an hour or so ago, thought a lot about what I was going to write for my weekly blog, and grabbed the laptop, heading to one of my favorite chairs. I set the laptop down so that I could take the teabags out of the cup of tea that I had prepared for this moment, and glanced at a new news notification on my phone.

An actor whose name I did not recognize was just fired from a show I no longer watch because of racist and misogynistic tweets he made before he joined the show. Usually these things wash over me, because it’s become common to see someone getting fired for their assholery since the #MeToo movement fired up.

But my reaction this time was oh, no. I sat with it for a moment, then realized I wasn’t reacting to the actor, but to the character, which was one of the few I loved in the last year I watched that series. Honestly, that character was what kept me watching the series for another year.

I had to remind myself that while the actor was an asshole (and the tweets are awful), the character wasn’t. In fact, the character was the right kind of heroic, someone who was learning how to believe in himself and gaining confidence.

I felt as disappointed as I would have if an acquaintance had done something similar. And acquaintances have done similar things. I unfriend many of them, and a goodly number have gotten themselves blocked for repeating anti-science talking points about the virus or saying really racist shit about…well, most anything going on right now.

I’m glad the rocks are being turned over, and I’m even happier that the light is being cast on this filthy darkness.

The darkness extends to some favorite authors of mine. A writer who supported my work heavily and whose work I’ve loved since I was a young writer broke my heart a few years ago with his homophobic statements. And just this past week, another writer whose work I like made some breathtakingly transphobic statements, which make me feel icky just thinking about them.

These people aren’t characters, but they’ve written some characters I adore.

I’m not opposed to reading books from people who have a different worldview than I do. When I was in college, I read spy thrillers written by a conservative columnist and learned a lot about a worldview I didn’t have access to at the time. In fact, I still read spy thrillers by writers whose politics are to the right of mine, and I’m still learning things about that worldview that I didn’t know—including the fact that we can agree about things, such as our reaction to current politics. Who knew that someone that far to the right would have similar feelings to me?

Well, I had hoped they would. You know, people with an IQ, and all of that. But even thinking isn’t assured these days.

Also, this morning, I had just read an article about post by Jeff Bezos of Amazon fame on his Instagram page. Amazon has a message that supports the Black Lives Matter movement on its main page, and also on its Fire TV’s home page. Amazon also pledged millions last week to groups supporting social justice and equity issues.

Bezos has gotten hate mail because of it, including threatening letters. The letter he posted on his Instagram page from some racist named “Dave” (last name redacted) told Bezos he would lose customers if he continued supporting Black Lives Matter. The letter is breathtaking in its racism.

And Bezo’s response ends with, “Dave, you’re a customer I’m happy to lose.”

Yes, I know. Amazon has a ton of problems of its own, from bad contact tracing to underpayment of employees to a whole host of other issues I’m entirely unaware of.

But the words stuck in my head. Because in the last six months, I’ve lost Patreon supporters due to my political opinions. I’ve also lost Twitter followers, and most likely, Facebook followers, although I don’t keep track of that.

The Twitter people usually leave with a nasty huff. The Patreon people are asked as they leave by Patreon why they’re going. Most are polite, but some aren’t.

All  of them told me, in the weeks/months before they left, that if I kept my mouth shut, they would continue to support me.

I could have my opinions. They just didn’t want those opinions expressed somewhere.

Whoops. That’s not how I’m made. I speak up. I do try to keep these posts focused on writing and publishing, because I’m trying to help as many people as I can.

And that’s the key phrase: as many people as I can. But there are people in the world, like that Dave guy above, who believe they are the only ones who deserve help and support. They’re the overt racists and misogynists, the ones whose speech we were told to deal with because we had to in order to stay in business.

But the people who bother me the most are the folks who, for economic or  political reasons, can ignore the racism and hatred that spews daily from the White House or from a friend or a boss, because it’s in that person’s best interest to ignore the nasty crap and focus on the “good stuff,” whatever that might be.

And I learned as a young woman that speaking out—however painful—is preferable to keeping silent. Silent allows the nasty shit to continue. Speaking up is what leads to change.

Which comes back to business. I know some of the people who left my Patreon account. Some were big supporters, who seemed, until they revealed themselves, like kind people—at least to 60-year-old white me. I have no idea how they treat the people of color in their lives or if they even have people of color in their lives. I do know that their support of system that I loathe makes them customers I’m willing to lose.

As some of them leave, though, I find myself reacting like I reacted to that actor this morning—with disappointment and sadness. Only with these supporters, I can’t pivot and say, well, I still like the character they created. Because, unlike actors who recite words someone else wrote, these people are writing their own words.

They might not be as offensive as the words of that Dave guy Bezos dealt with, but in some ways, their carefully phrased shut your mouth is more offensive.

Shut up, go along. I’ll give you money. I’ll be your friend, if you turn your back on your principles.

Nope. Sorry. Not going to do that.

So here’s the writing lesson, the business lesson.

Your opinions are yours. They’re also your choice. It’s a fallacy to believe you can be something to everyone or that all people will like your work. You will never appeal to everyone.

You might appeal to people whose politics differ from yours. That’s cool.

And you might lose people who used to love your work because of your politics and your beliefs. That’s cool too, because I’m certainly letting go of writers I loved because of their beliefs. They own those beliefs. I don’t have to support them.

The problem comes in when you’re maintaining a silence because you’re afraid you will lose someone whom you would not tolerate in real life.

America has been divisive for years now. When Dean and I started running in-person workshops over twenty years ago, we asked our students not to discuss politics or religion with each other for the duration of the workshop because we wanted the students to get along while the workshop was happening. It’s been a good decision, and one that will continue, because people are learning to see each other as human beings.

The ones who don’t see others as human beings reveal themselves in other ways, and several have been asked not to return.

We’re not asking our students to be politics-free in their lives or their writing or anything else. And most of them express themselves quite clearly most of the time. And if this were a normal time, where people treated each other like human beings with differences that could be resolved or lived with, we wouldn’t have a no-politics rule at our in-person workshops. But that’s not the world we’re in.

And…full disclosure…the person who has the most trouble maintaining a politics-free environment is me.

My work has never been politics-free. My politics pervades everything I write. Because I trained myself to speak up and remain blunt.

I try to balance two things in life and in my work: I want to respect everyone, even if we differ. But I draw the line at hatred, racism, and bigotry in all its forms. I can’t respect a bigot. I don’t want to be near a racist.

I’m glad the rocks are being turned over. I’m glad the light is finally penetrating the darkness that has coated this country since its founding. I’m cautiously optimistic that the shift we’re seeing now will continue.

If this post makes you feel the urge to write me a screed or tell me that I should tolerate the bigots for the sake of unity, please do me a favor and just leave.

I’m going to continue with my policy in these weekly business blogs of being somewhat politics free. If the world situation has an impact on the writing business or on business in general, the way it is right now, well, then, I’m going to comment. Because it’s relevant, and important to writers.

In my fiction, on my personal social media accounts, and in my life, I will continue to speak up as I always have—or maybe I’ll be a bit louder right now.

The moment calls for it—and I will not be silent.

20 responses to “Business Musings: Speaking Out”