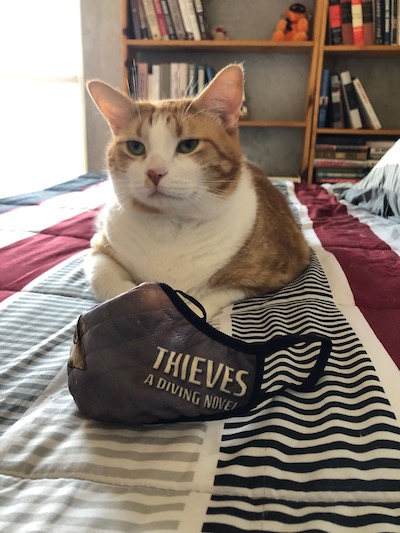 I’ve spent much of the past week on licensing for my Diving Universe. Some of this is because of the Kickstarter we’re running right now. Kickstarters can garner a lot of attention for a project, the kind of attention you can’t get anywhere else. (If you want to know more about that, and what else Kickstarters can do for your writing, then sign up for our free Kickstarter Best Practices class on Teachable.)

We did some small licensing prep before the Kickstarter. We got some new cover art for the three new books that have been announced through the Kickstarter. The art license allows us to do many things to promote the books. (If you don’t understand what I mean, then look at this post.)

One of the other things I wanted was a Diving-themed mask. We tried a couple of companies as we prepped for this. One still hasn’t delivered the prototype masks we ordered in May. Guess we’re never doing business with them.

The other delivered some nice masks that we all love. And so we used the art to design a nifty mask [insert photo of Gavin here], which we made available as a Kickstarter reward.

That was the extent of the licensing for this Kickstarter, or so I thought.

I’ve been in discussions with Catalyst Game Labs for more than a year about doing an extensive role-playing game for my Fey universe. We also talked about doing the sf series as well, and finally, in the spring, Catalyst issued an option on my three series, so that we could figure out what we wanted to do.

I’m not sure which of us suggested something small for Diving in connection with the Kickstarter, but Catalyst ran with it for the past month. We had to decide what we wanted. We hope to do a large game for Diving next year, but we didn’t have time this year.

So we discussed a Diving card game or a card-and-dice game. The more we talked, the more I realized that a card-and-dice game gave the players a lot more options. It would also be a cooperative game instead of an adversarial one which, as those of you who’ve read the early Diving books know, works better with the themes of those books.

The game designer spent a week trying to figure out how to make a unique Diving game out of a card-and-dice framework. Once we had that, we plunged into a level of detail that startled me.

What kind of art did we have? (Not enough.)

Which four characters should the game center around? (That wasn’t as easy as it sounded)

Where will the game take place?

What are the obstacles?

What kind of weaponry (if any) exists?

What are the threats?

What are the unique circumstances that the players will encounter while playing this game?

Since the people I’m working with have read Diving, they have a good sense of what pieces from the novels will work with the game. But they don’t have an in-depth understanding of how those pieces work. I do. And I also know some of the side stories and some of the (as yet) unpublished pieces of the project, so that the game doesn’t go down a wrong path.

I found myself thinking about probabilities and dice rolls and possible misadventures. Wherever possible, Catalyst asked for shorthand from me. And while that works sometimes, it doesn’t in others. I couldn’t assume people saw the same things I did in the shorthand.

For example, I mentioned that the character Coop is my James T. Kirk. Now, by that I meant, that if there’s a crisis, the person I want beside me is Kirk. He can figure a way out of any situation, using whatever means are at his disposal. Usually, his instincts are ethical and the best for everyone involved.

I prefer Kirk to all the Star Trek captains because of that unique aspect to his character. Janeway, for example, took several (TV) seasons to get her crew back from the Delta Quadrant after something had gone awry. It would have taken James T. Kirk an hour or two at most—because he never saw the universe the way anyone else did.

So when I said James T. Kirk, I was thinking of that guy.

Um…wow. Did the two of us have a different point of view on James T. Kirk.

I straightened all of this out, but it was a learning experience for me. Clarity, not shorthand. I needed to keep a weather eye on what was happening, if I wanted the game to be reflective of my world and my characters.

I love how it’s all coming about. The game will be ready for shipment in November, and I think it really will be as close to a Diving adventure as you can get with cards and dice.

But it got me thinking about some things that I heard at Licensing University in 2019. A number of the panelists emphasized the time it took to develop a license. You can be hands off, most of them said, but the licensee will be the one who makes the final decisions for your brand then, and that might not be what you want.

I got that part. But I also got to thinking about the way that people perceive things. At some point, Dean and I will be hiring someone to handle licensing for us. Contacting licensees and doing some of the nitty-gritty work will all be on that employee.

But guarding the integrity of a story or series? That’s probably going to be on me, and will remain on me. We will really have to have a firm job description when we hire that person, because it will be fluid.

For example, I might be confident in having that employee pick a high-end t-shirt, but I might have to pick the art for that shirt. Or figure out what elements belong in a game.

Sometimes, though, I will shrug, and let the licensee do the best they can. I’ve seen too many of my friends lose years of writing time because they try to control what a TV production company or a movie producer does with their book—right down to the look of the protagonist.

If I’m working with someone—and I do, often, as a producer—then I have to know when to say, You caught the essence of the story instead of insisting on the details of the story.

I studied a lot of masks and realized that I don’t really like masks that have a single word across the mouth. (I felt assaulted by a woman who was talking to me about something like lunch, because she had a gigantic VOTE! emblazoned right below her eyes. I agree with the sentiment, but wowzah was that aggressive and distracting.) I decided I wanted something comfortable to wear and interesting, but not so forceful that it distracted.

The game is less simple, but only because I’m involved. I don’t want my readers to be disappointed—to say that this character or that character isn’t presented correctly. But I’m also not telling the designers how to put the game together. They gave me choices and I made the choices. It’s that simple.

I do a lot of the same on the various movie/TV projects I’m working on. I mostly try to stay out of the way of people who know what they’re doing, but occasionally, I speak out, particularly when I know something will either have an impact on future storytelling (TV) or will piss off the die hard fans. Even then, I’m not going to fight to the death on that stuff, because with TV/film I know that the advertising value is worth a lot—and everyone expects the book to be different from the show/film.

But they will have sampled both.

That’s true of the game as well. But when they ask, I answer. Sometimes my answer is Please, use your best judgement. After all, that’s why we’re partners. Sometimes, though, I send quotes or excerpts from the books or my own (no longer in shorthand) opinions.

The other thing that takes a lot of time—at least for me—are the contracts. I’ve been in three contract negotiations in the past three weeks—finalizing the game details (once we had the format), renewing an option, and dealing with another new project that will probably go nowhere.

The number of hours I spend reading legalese is more than the number of hours I’m spending figuring out the game details. The contract is super important, though, because if I do something wrong, I (and my heirs) may pay for my mistake for decades.

So, I take the time.

But there are only 24 hours in a day. And those hours come out of somewhere. Right now, they’re coming out of two editing deadlines that I’m behind on.

Some writers drop everything writing to make licensing deals work. They lose writing time to business time. I could actually spend the rest of my adult life writing nothing, and making a boatload of money from licensing what I’ve already written.

But I see it as a career choice for a lot of writer/business people. Which is why I wrote Rethinking The Writing Business. Some writers might want to leverage their intellectual property and not write much more. It’s a good option for people who don’t enjoy the act of writing.

But this past month, and particularly these past two weeks, as we struggled to get all the details in order so we could announce the game with the Kickstarter, forcefully reminded me that licensing takes time. Not just time to put deals together, but time after the deals are made.

And that time needs to be factored into whatever decisions get made.

It was a good reminder, and one I needed as I plan the rest of this crazy, strange year.