Finished up lots of editing because I have a busy fall, and my time will be limited. So my reading time was limited to about an hour a day, plus what I could grab out of the slower moments. I read too much news, as well, which didn’t do me a lot of favors. I think I superstitiously believe that if I consume enough news, 2020 will end sooner. Yeah, right.

I did find good books when I had the chance to read. I also rediscovered the pleasures of short fiction, which really pleased me. I even reclaimed my ability to enjoy short stories that aren’t all that good. Half of a good story is okay with me, most of the time. But lately, it hasn’t been. I enjoyed a lot of the anthologies I read, but most of them weren’t worth recommending as a whole. But some of the stories are.

Here’s what I loved this month.

Block, Lawrence, “A Burglar’s Future,” Mystery Scene, Summer 2020. A really nice meta short story in which Lawrence Block himself enters the bookstore owned by his character, Bernie Rhodenbarr, and has a 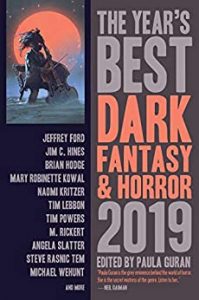 long talk with Bernie about writing, being a character, the current state of publishing, and more. Either find the issue of Mystery Scene or pick this up in Block’s upcoming collection.

Greenblatt, A.T., “And Yet,” The Year’s Best Dark Fantasy & Horror 2019, edited by Paula Guran, Prime, 2020. A truly powerful story, written in the second person. It’s hard to write good second person fiction. Second person is extremely distancing. Most readers argue with it, partly because it keeps telling “you” to do something or tell “you” that you have done something that you obviously didn’t do.

But this story is deliberately unsettling. It wants you on edge. And if we were deep inside the story, we would be in such pain that it would be hard to read. The story is brilliant and a masterclass in writing. 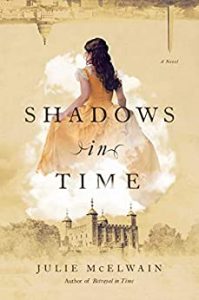 McElwain, Julie, Shadows in Time, Pegasus, 2020. First, I have to warn you. The ebook here is $16.99. I am not kidding. So, if you want an ebook, get it from the library. If you like hardcovers, as I do, then you can get it at a good price. But seriously. $16.99. Someone really wants to tank McElwain’s career. (That’s not true; it’s probably company policy on all new books, but it’ll have that career-tanking effect.)

I love this series. An FBI agent accidentally time-traveled back to Regency England–not the historical Regency period (because…yuck) but the Regency of all of those romances. There, she solves murders, despite all the cultural obstacles. The books have everything. Regency details, a great heroine, a good mystery, believable characters, and time travel. I finish one, and I want the next. I hope to heaven she can continue her traditional publishing career, despite the obstacles her publisher is placing in her way. 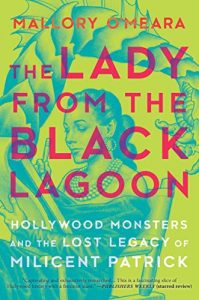 O’Meara, Mallory, The Lady From The Black Lagoon: Hollywood Monsters and the Lost Legacy of Milicent Patrick, Hanover Square Press, 2019. I loved this book. It initially caught me by surprise, because I hadn’t read any reviews. So I hadn’t expected to find so much of O’Meara in it. She wrote about herself, her feelings, and her journey, as well as writing about Milicent Patrick. She made their stories intertwine.

I ended up loving that, but it did mean that I didn’t give the book as a gift (which I would have done) to a movie-loving friend. She would have wanted a drier biography.

It’s tough to write a biography of a woman who kept changing her name, and whose history was erased from the studio where she worked by a jealous male boss. Milicent Patrick spent her entire life in Southern California, in and out of the movies. She was a fairly mediocre actress and a spectacular artist. She was one of the first female animators at Disney (if not the first) and she designed creatures, most notably the Creature From The Black Lagoon. She also did amazing sketches, and lived quite the life. 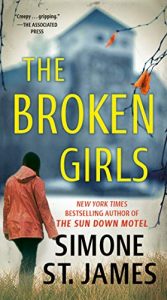 sad about this book is the way that treatment of women (and people without much power) has not changed in Hollywood. That’s how O’Meara was able to intertwine the stories. A couple of her personal anecdotes left me breathless with rage. O’Meara took the insults. I probably would have slugged someone (this is why I have not ever taken a Hollywood job, even though I’ve been offered a number of them).

Royce, Eden, “Even Good-bye Ain’t Gone,” The Year’s Best Dark Fantasy & Horror 2019, edited by Paula Guran, Prime, 2020. A lovely (if you want to call dark fantasy lovely) story about a family that contacts spirits for a living. Only this time, they’re asked to contact the protagonist’s ex-husband. The current wife wants some answers, and is going about everything all wrong. A well-drawn portrait of a family, and of magic that’s familiar and unfamiliar at the same time. Well done.

St James, Simone, The Broken Girls, Berkley, 2018. Oh, my. Perfectly creepy, wonderfully atmospheric, delightfully scary. I loved this book, even with the long-dead baby. (I usually don’t like books with dead children, but this one was a minor and expected plot point.) The setting is an abandoned girls’ boarding school outside of town. Of course the thing is haunted. Fiona’s sister was murdered on the grounds a few years back, but that’s not the only terrible thing to happen at 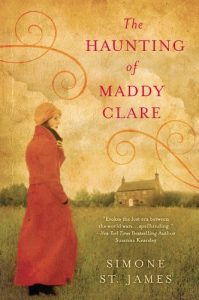 that location. Back in the 1950s, another girl disappeared, probably the victim of something awful.

The book goes back and forth between the 21st century and the 1950s, and is stronger for it. I devoured this book, and loved every minute of it.

St. James, Simone, The Haunting of Maddy Claire, New American Library, 2012. This is St. James’s first novel, which won some major awards. I didn’t like it as much as her two contemporaries, but it has the same haunting atmospherics, this time set in the 1920s in England. The characters are interesting, the ghost less so, and the crime predictable. But the second half of the book is still compelling, even though it’s clear to the reader what’s happening (even if the characters are somewhat clueless). I wouldn’t start here with her works, but if you’re a completist, you’ll enjoy it.