I read a lot in September, but some of it was in manuscript for the fantasy study-along. I am putting all of this up late, because I got behind making note of things. I also started two different novels and quit. One was just plain boring. I kept forgetting what was happening. Another was offensive from the second chapter forward, and I decided to stop subjecting myself to it.

I’ve been casting about for a good mystery novel that really hits my crime-reader interests, but I haven’t found one, which is why I’m reading outside of my usual authors. Wow, there are a lot of dull books published under the “thriller” and “crime” genre heading. Wow, does that still surprise me.

I ended up reading a really good gothic, which I should have recommended here…until the ending convinced me not to. Seriously, the killer was a character we never met before and wasn’t even hinted at. And then, eleven years after the event, our heroine murders the killer on an airplane. It was like someone had grafted a terrible ending from another book onto this book. So, nope, no recommendation here.

However, I did read a lot of good short fiction and a few interesting other books. Here they are. 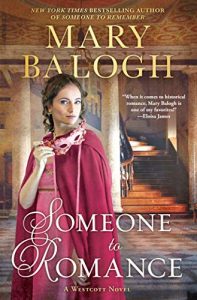 Balogh, Mary, Someone To Romance, Jove, August , 2020. I had preordered this book and when it arrived, I was sooooo not in the mood to read romance. Happily ever after plus the made-up fantasy world of Regency really didn’t interest me. I actually wondered if I would ever happily read romance again.

Fast forward a month or so, and I had read disappointing mystery after disappointing mystery. I really wanted something gritty and nasty, but couldn’t find it. Then, one night, when I had a headache, I grabbed this book. Not because it would be gritty and nasty, but because Balogh can write. When I get tired or headachy, I have to read a good sentence by sentence writer or I get thrown out of the story. Balogh was the only one I had that I was sure was a good wordsmith and a good storyteller.

Another aside—I hate this cover so much that I looked at previous books in the series to see if the cover even fit. It does. I just loathe the cover, so it kept putting me off. I didn’t realize until I started the book that it was about Lady Jessica Archer, who is a character I liked a lot. In my mind, she looks nothing like this creepy woman. My copy is now bent out of shape in a variety of ways because I didn’t want to look at this woman.

Anyway, the book hits a lot of my reader cookies (to use Gardner Dozois’s term). A secret identity, a slight mystery, lots of emotional tension. And what’s really great about this book is that Balogh doesn’t cheat. A lesser writer, particularly in romance, would make sure that no one confessed anything, that secrets would remain secret even when it was stupid to do so—and Balogh does none of that. She reveals secrets right at the best point and it creates even more tension.

Considering that this was a book I really was not ready to read, it climbed over every single objection I had and made me love it even more than I thought I would. And that’s marvelous. 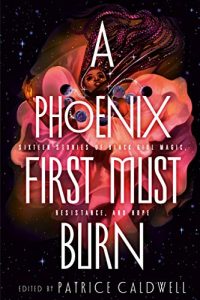 Caldwell, Patrice, A Phoenix First Must Burn: Sixteen Stories of Black Girl Magic, Viking, 2020. I assigned this book to my Fantasy Study-along class without reading it, hoping the book would be good. And oh, wow, it was better than I thought it would be. Not all of the stories are to my taste, but they’re all worth reading. I’ve pointed out my favorites here, but I liked many others in the volume and only skipped one because of the subject matter, not the writing or the storytelling. So pick up this anthology. It’s wonderful.

Clayton, Dhonielle, “Hearts Turned to Ash,” A Phoenix First Must Burn: Sixteen Stories of Black Girl Magic, edited by Patrice Caldwell, Viking, 2020. This story held me from the very first sentence. Jackson and Etta break up, and Etta’s heart starts disintegrating. We’ve all been there, the ache of a break-up. Only…this is a fantasy anthology. Her heart starts to literally disintegrate. Now there’s a major problem. Not only does this story work on the metaphoric level, but it works as a story as well. That’s the best kind of fiction.

Lore, Danny, “Tender-Headed,” A Phoenix First Must Burn: Sixteen Stories of Black Girl Magic, edited by Patrice Caldwell, Viking, 2020. The characters in this story are great, and the magic is wonderful. The story itself is filled with surprises. One caught me completely off-guard. I can’t tell you how much I loved this story. 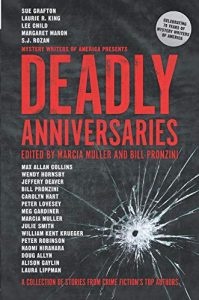 Muller, Marcia, and Pronzini, Bill, editors, Deadly Anniversaries, Hanover Square Press, 2020. This is the annual anthology compiled by Mystery Writers of America. This year it was a bit different, since the volume commemorates the 75th anniversary of the organization. That meant that every single writer was either an Edgar nominee or someone high up in the organization. Meaning that all of them are not just pro writers, but major pros.

They were all to write about an anniversary. Some of the stories are clever. Many are expected. At least two were phoned in. One was an experiment for the author (that failed, in my opinion). All are well written and worth reading. None was all that memorable or even worthy of its own individual mention.

Still, pick up the volume. You’ll find a lot of good stories here that will entertain you for an evening or for a few days.

Paige, Danielle, “The Actress,” A Phoenix First Must Burn: Sixteen Stories of Black Girl Magic, edited by Patrice Caldwell, Viking, 2020. I shouldn’t have liked this story. And honestly, I’m not sure it fits thematically with the others. It’s a true romance and unfortunately, our hero rescues our heroine, which made me a bit uncomfortable. But when I set the anthology’s theme aside, I loved this story. Even though its rather traditional magic hits tropes I don’t normally like. Really well done.

Rothschild, Jennie, “Hold On, Ebooks Cost HOW Much?” Smart Bitches, Trashy Books, September 6, 2020. I’ve been blogging about the things that are going wrong with traditional publishing, especially when it comes to getting books in front of readers. But I’ve only mentioned the library problem in passing. Jennie Rothschild lays it all out in this article, and it’s breathtakingly sad—especially when you consider that we’re in an economic crisis now, and a lot more readers than usual are relying on libraries. Prepare to be heartbroken. 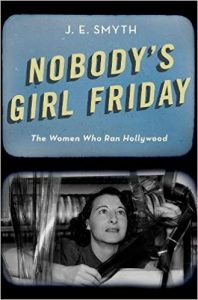 Smyth, J.E., Nobody’s Girl Friday: The Women Who Ran Hollywood, Oxford University Press, 2018. First, let me warn you. This is academic writing. The book is dry as toast, I’m sorry to report. Many, many, many paragraphs are just lists of names.

However, even with all of that, Smyth’s argument shines through. And it’s becoming a common one in my reading. Women have done a lot in the history of the arts, particularly in the 20th century, and their contributions have been either ignored or forgotten. Smyth’s thesis is that women ran Hollywood from the 1920s to the 1950s—essentially in the studio era—and her lists back it up. Each paragraph (that isn’t a list) features a story about a woman doing something amazing. Each paragraph could be a documentary in and of itself.

So do yourself a favor and slog through this one. You’ll learn a lot. And maybe you’ll be inspired to spread the word about these amazing women as well.

Strong, Karen, “The Witch’s Skin,” A Phoenix First Must Burn: Sixteen Stories of Black Girl Magic, edited by Patrice Caldwell, Viking, 2020. Strong deals with a boo hag, a story trope (and myth) that I’ve seen a lot over my reading and editing career. But I’ve never seen anyone handle a boo hag like this. Surprising and powerful.