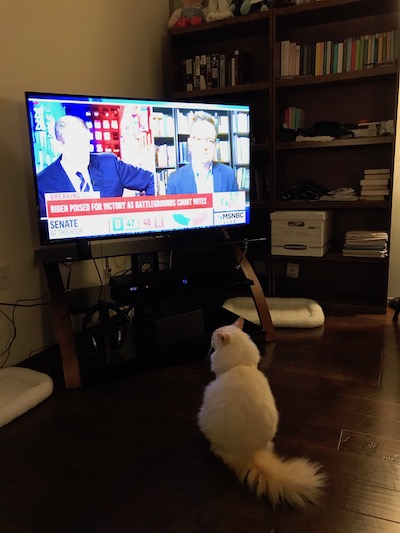 As predicted, all business slowed to a crawl as the entire world watched the United States finished voting on November 3, and then tallied the votes. Hardworking people in municipal and state governments all over this country stayed up late, wearing masks and following protocols they couldn’t have dreamed of in 2019, so that they could use whatever system their small government unit employed to count the votes.

Those of us who wanted all the votes counted—and honestly, non-Americans, that was most of us—kept reminding ourselves that counting took time. And then more time. And even more time after that.

I got into the habit of checking my phone or turning on the TV or sliding off whatever I was doing on my laptop to see what results had trickled in. I was in my Spanish class on Wednesday with my do-not-disturb on, a blissful ninety moments of discussing word usage and the subjunctive and Gabriel García Márquez when Dean texted me with the news that Michigan had been called for Biden. I had been in the process of asking, in halting and terrible Spanish, how the past perfect subjunctive worked in the particular “if” clause before us when the text scrolled across the faces of my classmates on Zoom.

I nearly burst into tears.

That helped clarify my spoken Spanish. Not.

I have not returned to my Spanish lessons since that class. And that’s a problem, since I have a revised composition due tomorrow, as well as some vocabulary and a half-assed translation of the aforementioned Márquez. I also have a lot of non-fiction to finish, a great deal of promotion, and…I’m damn near the end of the Diving novel I’ve been working on.

The promotion is really necessary, because the dividing line between Before November 3 and After November 3 is vast. I have forgotten what I was doing in those days, as I’m sure you have.

Judging from all the unsolicited emails and texts and tweets and Facebook messages I got from my friends and business colleagues overseas, the entire world stopped to watch us count. Judging from the newspaper headlines that came across my Twitter feed, the rest of the world deemed this election as important as the United States did.

Very few of the headlines were funny (the easily predicted “you’re fired” headline). Most were filled with that undercurrent of relief.

Sometimes we all stop and watch, and American is designed for that stop-and-watch every four years.

As I wrote in 2016 and earlier this year, the stop is an important part of stop-and-watch. In early 2020, before we knew about the threat of the pandemic, I thought there was a chance that this could be a normal election year. (Cue hysterical laughter.)

To my credit, I did write this: We will be lucky if this is a standard election year.  I think it’ll be a wild ride, not just in the U.S., but in the world.

I was advising you all to plan for lower sales in 2020, not anticipating the shutdown of bookstores, the lockdown that would make people hungry for entertainment, and the fact that the entire world turned to the internet for that entertainment.

Many of us had increased sales in 2020…until about a month ago.

WMG Publishing, Dean, and I launched a Kickstarter into that mess. We did so deliberately. It’s our (now) annual Holiday Spectacular. Readers will get 37 stories, one per day, from American Thanksgiving (the last Thursday in November) to New Year’s Day. There are a lot of other holiday-related rewards, as well. (Including, writers, an online craft workshop, available only in this Kickstarter.)

We’ll end the Kickstarter right as close to the start of the Spectacular as possible. We counted backwards from that start, and figured we’d need to run the Kickstarter from Halloween to sometime next week.

And then we looked at the calendar. The election came four days after Halloween. Which would stall the Kickstarter. We figured the stall would start a week before the election and run until a week after, so we started the Kickstarter a week earlier than we wanted, and had it run a week longer than most of our Kickstarters.

We figured the Kickstarter would slow over the election. We did not anticipate five days of vote counting. If anything, we were being binary. Either we’d know on Election Night or we would know in December, just like 2000 (Bush v Gore).

But, no. 2020 has more tricks up its sleeve than a bad magician. We had the vote and then the slow slog to the finish line. Momentum on the Kickstarter slowed on October 30, and then stalled almost completely on November 2.

Our task now is to remind people that the Kickstarter exists. Just like we need to remind them about all the other promotions we’re doing, not to mention the books we’re publishing.

Because we made a hard right turn in March, when Covid became a real threat. Rather than delay everything, we decided to trim where we could and just keep our heads down and publish, publish, publish. We figured people would want to read.

We just didn’t know how much.

The upshot of all of this is pretty simple: It is impossible to predict the future. It is possible to predict certain things, based on past events. As long as the United States remains central to world affairs, the world will stop and watch as we race (or crawl) to the finish line of our presidential elections.

So anything published in that window will not get the attention it deserves. Although, as a writer/publisher, you might want to stealth publish something there or provide alternate content for those who don’t want to watch paint dry. (I mean votes get counted.)

If the past four years taught us anything, it taught us that whoever we put into the office of President will change not just our country, but the world. The person in that position matters.

And, now, as we change leaders for the second time in five years, we have to pivot. We’re going to go in a different direction.

Clarity helps. I can’t tell you how many emails, comments, and texts I got from writers who said that they hadn’t been able to focus as this year progressed. This was a change election. We’ve said that from the beginning. So when a change election happens, we have no idea if we’re facing more of the same or something radically different.

That direction helps focus. We can plan.

Just like WMG and Dean and I did when Covid hit. We knew that we had to reorder everything we had thought about the year ahead. We revamped, and cut, and strategized, and we were still wrong about what was coming.

But we were much better prepared than people who decided the virus would leave us in a month or so, or that the economy would recovery by summer. We planned for the worst, and got hit with (for us) what was not so bad.

We’re lucky. Here in the U.S., more than 100,000 small businesses have permanently closed due to the pandemic, with more to follow. Cases here are still surging, and local governments are debating tough measures again.

And while the U.S. is the poster child for the developed world’s worst Covid response, other countries are facing a tough winter as well. France, England, Germany, Ireland, Belgium, and Austria have reinstituted strict measures similar to the ones they instituted in the spring. That means more economic losses and business closures…even as more lives get saved.

What we can predict in the near future is a lot of economic hardship. In six months, after we follow the science (all of us, including Europe) and maybe throw some stimulus at small business (here in the U.S.) we might be able to breathe freely again.

We writers need to do what I suggested last week. We need to hunker down and write. A lot.

You’ll see that post next week, unless something really bizarre happens in the meantime.

So, now that we have clarity—somewhat—and we no longer need to vote (here in the U.S.) and watch the post-voting tabulation, we can move forward into the 2020s. They’ve started with a proverbial bang…or is this a whimper? I’m not exactly sure.

But the start is dramatic and it was life-changing for all of us.

Now, we need to gather ourselves, accept our new reality, and begin to construct the future.

That’s what we humans do anyway. We construct the future.

Now that the election is over, and the initial phase of the Covid crisis has morphed into the long slog, I feel like I can focus on our industry again. Expect more industry-focused posts as we go forward. I’m probably not going to write a year in review. I don’t have the heart for it. (Although I reserve the right to change my mind.)

Thank you so very much for your support of this blog. I love reading your comments and emails. And a reminder: the blog is reader-financed.