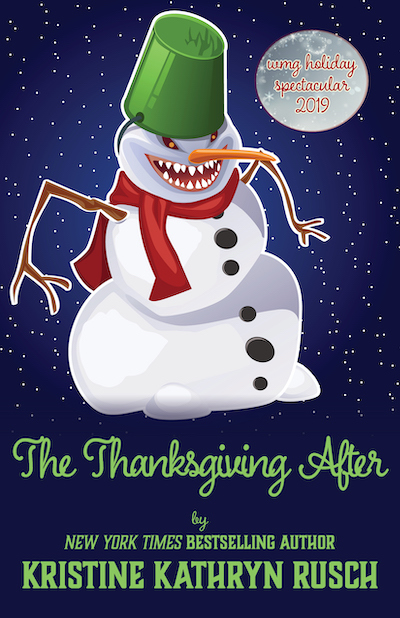 Note: This week’s free fiction story was originally published in 2019 as part of the first WMG Publishing Holiday Spectacular Calendar of Stories (you can learn more about that project here). What follows is an excerpt of the introduction that accompanied the story when it was first published last year.

Thanksgiving, for those of you who don’t celebrate it annually, is my favorite American holiday. It’s a feasting holiday and, for the most part, the entire country prepares a version of the same feast. Turkey, stuffing, potatoes, cranberries, and pumpkin pie are usually on the menu. Since the U.S. is a society filled with many cultures, each culture adds something specific, so every family and/or celebration includes a dish that wasn’t on the original menu.

And since so many people are vegan or gluten free, recipes that replicate the feast without actual meat or without gluten also exist. (I make dairy-free pies every year.)

The holiday has morphed over the years. It used to be all that anyone did. Restaurants weren’t even open when I was a kid. They are now, which means that people have to work, and juggle their feasts with their jobs.

And Black Friday—America’s biggest shopping day of the year—has crept into Thanksgiving, starting late Thursday afternoon. When I was a kid, Thursday afternoon post-feast was filled with American football, cheering (or glowering at the TV), and extra helpings of pie. Now, some watch TV, but others shop.

When it became clear to me that I wouldn’t have a Thanksgiving story, I decided to write one. Or rather, write another one.

I’ve written two other Thanksgiving stories. The first, “Pudgygate,” features a dinner party in an English country manor with an American cook named Bubba making a traditional Thanksgiving dinner, waiters from Cal Tech, British royalty among the guests, a cat named Pudgy, and a thief. The other, “Snow Day,” takes place in an airport, where people spend holidays unintentionally. I figured I’d done Thanksgiving, and I was a little worried that I had nothing else to say.

Then I moved to Las Vegas, and did some decidedly not-small-town things. I ran in a Turkey Trot 5K and after our feast, went shopping. I had planned to use the shopping experience for a Black Friday story. Surprised me when I ended up combining them.

It did not surprise me that I was writing a mystery, though. I’ve been longing for some good mysteries lately, and usually when I long for something, I end up writing it.

I write a lot of mysteries. If you want to read some of the shorter ones in a collection, try Secrets and Lies or Five Female Sleuths, or maybe the novel I wrote under the name Kris Nelscott, Protectors.

In the meantime, enjoy “The Thanksgiving After.”

2 responses to “Free Fiction Monday: The Thanksgiving After”