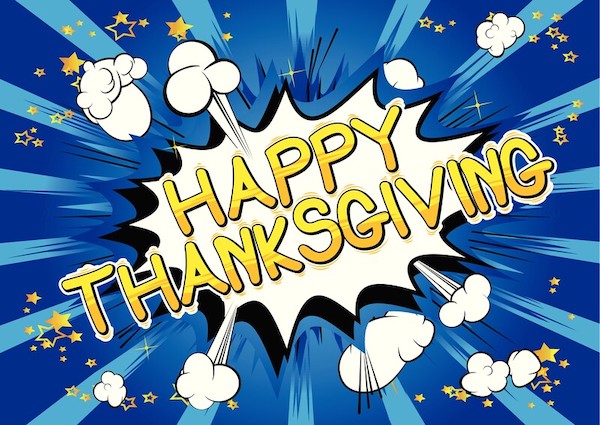 I call this a regular Thursday blog, even though it posts on Wednesday night (if I’m lucky). Which means that every year, this post falls on American Thanksgiving, which falls on the last Thursday of November.

Having bleak years is part of being human. Living through those years is torturous, but it can be done. People have done so as long as the human race has existed.

I didn’t want to write a bleak blog post on what is for many of us a very different holiday than we usually have. I learned long ago—and posted a note about it on Friday—that the best way to get through a tough holiday season is to own that season. Make it special in the best way you can.

One of the things I love the most about Thanksgiving is in its name. Giving thanks.

In the worst of pandemic lockdown, when we were uncertain about how we were going to get to May, I ran every day, and actually heard birds in downtown Las Vegas. I enjoyed the sunsets from the spectacular windows of my home. Those things are small, but important.

The other day, I likened those early months to December of 1941 here in the U.S. On December 7, 1941, the Japanese bombed Pearl Harbor, bringing the U.S. into the war. That sentence is a bland way of describing something that was life-altering.

Men enlisted that day or the very next day. The entire country geared up to a war footing. By Christmas, millions of people were living a completely different life than one they imagined before. But they didn’t yet know what kind of life awaited them. They had no idea how they would fit into the new world, even if they had an inkling.

We know what the risks are. We know how to minimize them. We are cautious in a way we have never been before.

We now know that our lives will never “go back” to normal, but we’ll live in a new and different world, one we can now catch glimmers of.

As a result, we’re less panicked, although still deeply worried. We know there are a lot of changes ahead, not all of them good. But we’re in a clearer place.

I’m thankful for that.

I’m thankful for everyone who has stepped up. From the first responders to the medical personnel who are going through hell. From the government officials who’ve been trying to make hard decisions in trying times (and, here in the U.S., without federal support).

I’m thankful for friends and family, for people who with even the tiniest of gestures have made every day brighter.

I’m also thankful for readers. They’ve been marvelous this year, with their questions and their concerns, their willingness to try new projects and their support of old ones.

I’m thankful that the writing business is growing, despite the changes that are happening in the older part of the industry. I’m thankful that we, as writers, have a place to escape to (our own fiction).

And I’m thankful for all of you who come here regularly, who support this blog. I’m thankful that you’ve made it possible for me to explore the changes in the industry every single week since the first week of April, 2009. I couldn’t have done any of this without you and your support.

So, as we head toward the end of this very tough year, let’s continue forward with as much optimism as we can muster.

I can’t promise that 2021 will be a better year. I no longer trust my ability to predict the emotional impact of the future.

But I do know that a lot of good things will happen in 2021, because we’ll all be there together, figuring our way forward.

Thanks for being here, for coming to this website every Thursday.

Your presence here is one of the highlights of my week, and has been so for 11 years.

“Business Musings: Giving Thanks” copyright © 2020 by Kristine Kathryn Rusch. Image at the top of the blog copyright © Can Stock Photo / NoraVector

4 responses to “Business Musings: Giving Thanks”