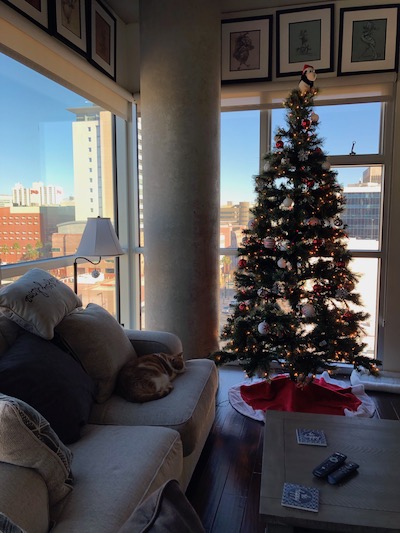 I’ve been running full-speed ahead since the beginning of November. I knew I was near the end of the very long Diving saga I’ve been writing. The book I’ve been writing most of the summer was nearing completion, and was turning out to be more than 300,000 words, which is ridiculous.

Then there was my Spanish class, which really has been a godsend. I needed to focus so hard on it that there wasn’t room for the pandemic or the election or the economy or my writing or my various other projects. If I needed an escape, I would take a practice vocabulary quiz or work on the various forms of the subjunctive.

The class was kicking my butt, though. I couldn’t fudge my way through it, not that I wanted to. I’m back studying the language because I don’t have enough vocabulary and I don’t know what I’ve been calling the “fiddly little words,” meaning words like “de” and “por” and “para” and other conjunctions that can sometimes mean the same thing in English, but in Spanish hold a lot of subtle differences. I’m educated enough to know there are differences, but not smart enough to figure out what those differences are.

Then there was the never-ending election which, for five days, I couldn’t look away from (not even for Spanish), and news of the vaccine, and the new COVID restrictions and the alarming rise in cases and and and…

I didn’t feel like I was on any kind of treadmill because I knew that the pressure would leave by December 7. That was my final exam, and I could rest, if I needed to.

Whoa, boy, did I need to. Me, myself, and I planted ourselves on the couch and watched a movie we’d been longing to see. I still had other obligations to fulfill, but I only did a few of them.

Today, December 8, I’m doing a few more. I’d hoped to write a longer blog. I have four sketched out. Yes, I’ll be doing some year end stuff. But I don’t really have the mental bandwidth to explore the things I want to explore. I will in the next few days. I’ll be revising the big honkin’ Diving book, planning future projects, and writing some blog posts, as well as doing some editing.

And, believe it or not, that’s less work than I’ve been doing.

I’m actually feeling organized, even though I’m not. I realized that the uncertainty caused by the election and the virus had taken my brain and held part of it hostage. As Dean said to me just last night, now that we know what contours the future will have, we can plan.

Until November 7, we had no idea who would be sitting in the Oval Office come January 20. The two men running for president have two such different visions of America that, for once, the paths ahead of us were starkly different as well. If Trump remained in office, then our future veered in one direction. With Biden, the future will veer in damn near the exact opposite direction.

The problem was this: Until we knew the result, we couldn’t see past January 20. Now we can.

Add to that the pandemic. It has injected a level of such extreme uncertainty into our lives that we all feel jangled. Here in the States, things are particularly fraught, because we have anti-maskers and anti-science people who refuse to take the virus seriously. I’ve lost several friends because they live in areas where the virus is essentially out of control, and someone got too close to them.

For all the hope of a vaccine, we didn’t have one until this fall, and now we have three possibles. People smarter than I am are planning how the vaccines will be distributed, who will get them first, and where they will go.

Yes, that will be dicey and sometimes fraught, but it will get done. By the fall—if the anti-science people don’t fucking poison yet another well—we will have about 80% or more of the U.S. population vaccinated. And, our experts tell us, that’s enough to “starve” the virus, and make it almost—almost—impotent.

Which means we can hug our friends again, go to concerts, walk into a crowded bar, and sit in a classroom without worrying about getting sick. Yes, there will still be restrictions, maybe even masks for a year or two, but hell, that’s a small price to pay for peace of mind.

Those two things—knowing what kind of government we’re going to have and knowing that a year from right now we will no longer be dealing hourly with the restrictions caused by a terrifying virus, freed my mind.

I can now look forward with some degree of confidence. Not certainty, because on a micro-scale, a personal scale, there’s still a lot of uncertainty, but with confidence that we (the world) will be moving to the next phase of our lives quite soon now.

We will have to deal with the wreckage this virus caused, and that will be a post in the next week or two or three. We don’t know the entirety of that wreckage yet, but we will, eventually.

We are seeing pieces of it, though.

For example, in the past two weeks, I’ve also heard from my movie/TV partners, all of them wanting option extensions. I’m not the only one feeling like projects can move forward again. The entire film/TV apparatus is beginning to feel that way too, even as LA and the rest of California are moving closer to lockdowns again.

The film/TV industry is changing so dramatically that I doubt we’ll recognize it in two years. For example, Warner Bros. will release all of its 2021 films on HBO Max as well as in theaters. All of the films, including the big tentpole blockbusters. The implications of this are just beginning to be understood. Take a look at this article in Variety to understand why this is such a big deal. Variety, The New York Times, and other outlets aren’t quite able to wrap their minds around what this all means yet. Neither can I, which is why I’m saving this for a post when I actually have a brain to assist me.

Then there’s the big publishing news. Two weeks ago, the news that Bertelsmann (Penguin Random House and more) was going to buy Simon & Schuster, giving Bertelsmann more than 50% of the traditional book market. There’s all kinds of controversy around this. See this Publisher’s Weekly article for just one take on that.

In order to “prove” that they weren’t going to take over more than 50% of the market (which isn’t allowed here in the U.S.), Bertelsmann cited self-publishing books, which Bertelsmann had previous dismissed as unimportant. Frankly, I doubt the argument will hold, because the publishing industry is splitting into the Ancient camp, which this merger is part of, and the Future camp, which is indie/self publishing. It’ll be interesting to see how this plays out over the next year. I can tell you this, though. If your dream is to be traditionally published, your hopes of actually retaining your copyrights and making a living have just decreased dramatically. And they weren’t that good to begin with.

The third little tidbit that I have for you isn’t earthshaking at all. It is just a tiny little fact I discovered on the way to something else.

Apparently, the classic holiday movie, It’s a Wonderful Life is based on a self-published short story. According to Christmas in the Movies by Jeremy Arnold, writer Philip Van Doren Stern couldn’t sell his short story, “The Greatest Gift.” And believe me, back in the last 1930s/early 1940s, there were a lot of markets to try.

When he realized the story wasn’t going to sell, he made it into a holiday card and sent it to people he knew—including his Hollywood agent. The agent “promptly” sold the story to RKO, but RKO couldn’t get a satisfactory screenplay. So they eventually sold the rights to Frank Capra, who ended up making the film.

Even in the tight-as-tight-could-be old days of gatekeepers and people who looked down from on high at self-publishing, some writers still believed in their work. Rather than looking for validation, Stern believed enough in his story to make a gift of it.

And that gift gave back on a rather amazing level.

When I tell writers that they need to believe in themselves and their work, this is what I mean. Because writers who believe in their work never give up on it. And when you believe in yourself and your work, you make things happen, rather than let them happen to you.

Now, I’m going to make a few things happen. I need to answer a week’s worth of email, figure out how I’m going to schedule the rest of my week, and then find yet another nice comfy spot on the couch to give my poor tired brain a rest.

I don’t think I’m going to focus on the subjunctive much either for a while. At least until next semester. Which starts in just 42 days, not that anyone is counting…

P.S. The photo is a random holiday shot of my cat Gavin, just because…

5 responses to “Business Musings: Tidbits And Rest (A Process Blog)”