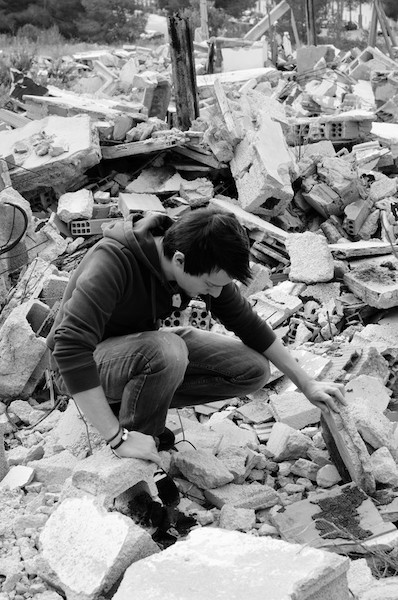 I have considered writing this short series for more than a month now, and every time I envision it, I see myself standing in a pile of rubble, surveying the landscape. It’s almost a movie scene, probably an amalgam of every disaster movie I’ve ever seen.

The camera focuses on a small section of rubble, which moves every so slightly. Then a hand emerges, nearly obscured by dust. The hand grabs a sharp edge of concrete, and holds tight. More debris moves, and a person eases out, so covered in dirt that every part of them—body, face, clothes, shoes—are all the same color.

The camera pans back, shows what’s left of the building, then the street, then the neighborhood, then the city…and on and on and on until we see the country, the oceans, the entire world. Rubble, ruin, disaster.

Amidst it all, though, are intact buildings, beacons of light. Hospitals, overwhelmed like they are in a war zone, are still functioning. Helicopters fly overhead. People, most as dusty as the person the camera started with, are digging through the rubble, not the way that survivors of earthquakes do—desultorily searching for their belongings—but the way that construction workers do, clearing the rubble so that they can rebuild.

Somewhere in between, something the camera doesn’t catch, are all the rescue workers, combing the ruins carefully, trying to find survivors, anything that remains of their lives.

I wrote some stories—most in my Faerie Justice series—about Europe after World War II. The photos from that time keep coming up in my head: there’s a semblance of normal life, even in 1946, just after the war ended, but the backdrop is always ruin. There are streets, piled with rubble the way that streets in winter are bracketed by snowbanks.

Frankly, it was those pictures and that history which has gotten me through the past ten months. History is all about human resiliency. Terrible stuff happens, and people climb out of it. They rebuild. They create something new and fresh.

But all around them, there is devastation. They can remove the devastation, but it remains for them.

I once read a memoir by a woman raised in Vienna at the end of the 19th century. She was Jewish, and lived in what many considered later to be a Jewish Renaissance. Then, the 1930s happened. Many Viennese Jews fled, but even more died horribly at the hands of the Nazis. That cultural center was obliterated.

And yet, the woman (whose name I cannot quickly find) could walk down the same streets decades later and see in her mind’s eye the lovely homes of her grandparents and parents. But she could also see those homes destroyed. And as she walked, she saw the neighborhood as it was. Ghost buildings, ghost rubble, and the present.

I suspect that after this horrible year, we will all have those same kinds of images in our minds. We don’t even know what we’ve lost yet. We’re still in the midst of the crisis. Here in the U.S., people are dying at an alarming rate—more than in 9/11 every single day. The hospitals are at capacity, and in some cases over capacity, and still idiots refuse to believe this virus is real. They refuse to wear masks, refuse to social distance, and refuse to alter their behavior one iota.

But…the vaccine is here. Distribution has started. I figure that by summer, we will all be vaccinated. (And if you come on here and argue against the vaccine, well, I just feel sorry for you and your family. The world is offering you hope, and you’re spitting all over it, preferring to get sick and die. How very sad.)

We are emerging, one finger at a time, from the worst of the crisis. And then we’re going to have to stand on the piles of our own personal rubble and see what remains.

We can’t rebuild until we have combed through the wreckage. And most of us (all of us?) don’t know what’s beneath the surface right now.

Twice today, I have seen that very idea float past me. The first time in a CNN.com article about the way that people are losing friends and family in this crisis—not just to sickness and death, but to disagreements about how to behave. In the article, a therapist, Jeff Guenther, said that relationships may be affected forever after the pandemic, and added this:

If that’s the case … that’s one of the many traumas to come out of 2020 that we don’t even fully know about yet.

“One of the many traumas…” Yes. There are many. From the deaths of loved ones (which, one study showed, affects at least 9 people directly. So up the impact of the death toll by a factor of 10, and you might catch an idea of the ripple) to the loss of businesses to financial woes, the list goes on and on and on.

A friend on Twitter mentioned the other thing this morning that will have repercussions throughout next year. He mentioned that we’re not counting the impact of all those people who were on ventilators or in the ICU and survived. Yes, they’re better. But they will have health impacts for years to come. A ventilator is a tough thing to go through. Some survivors need to learn how to swallow and speak again. Others how to walk.

And then there’s the long-haul COVID sufferers. Again, health impact. Impact on families. People who are no longer functioning at 100%, and might never do so again.

I saw a quote recently—and I wish I could find it again—that we’re experiencing this crisis globally, but living it locally. Meaning that yes, we’re all going through something to do with COVID right now, but each one of us is walking a different path through this rubble.

So, as I prepare to review 2020, I really can’t wrap my arms around the entirety of this crisis. We don’t know the entirety of it. All we know is that there is the bright light of hope off in the distance. That’s a vaccinated future, where we can hug our friends and families again.

What I’m going to do in the next few weeks, and that includes over the holidays, is look at segments of the industry, and see if they changed at all or if there will be some long-term impact.

Because, as I said, there are bright spots in the rubble. Or at least, survivable spots. Some places are even making money.

I will be writing these blog posts during the week of December 15 and posting them on Patreon first. Then I will follow them with posts about 2021—cautious posts, because I find that I’ve got a bit of PTSD about looking at the future at the moment.

Thanks to everyone who has been sending me links and thoughts and articles I might have missed over the past few months. Please continue to do so, and I’ll do my best to synthesize all of this.

I have to be honest: I probably wouldn’t have been able to write these pieces if none of the vaccine candidates panned out. The fact that we have two highly effective vaccines is the best news I’ve heard all year. It’s really tough to plan when the future is an icy lake, and you’re in your stocking feet trying to walk across it.

Hope backed by science, however, has a much better chance of getting us to the next milestone.

So here I am, standing on top of the rubble, trying to clear the dust from my eyes, so that I can see the upper layer of the world—or at least my corner of it—so that I can figure out what to do next.

I hope these next few weeks of posts will give you clarity. Spoiler: I’m hoping they’ll give me clarity too.

“Business Musings: Wreckage (2020 in review),” copyright © 2020 by Kristine Kathryn Rusch. Image at the top of the blog copyright © Can Stock Photo / hemeroskopion.