Oh, wow. We’re in 2021! I found that I couldn’t read novels until after January 20. I guess my brain could only handle short bursts.

I read a couple of novels, but am only recommending one. The others didn’t stick the landing. The endings were either awful or nonexistent. I’ve noticed that a lot lately in non-series books, especially those traditionally published, and I have to wonder what the trend is all about. I don’t like it, and it’s making me wary. Ah, well.

I’m still reading the Big Book of Reel Crime. When I returned to novels, I stopped reading here. I also have two anthologies that I’m editing, which happens to take some of my short story reading time. Still, I found a few stories from this one to share anyway.

There are lots of short stories here, lots of essays, and some articles. Enjoy!

Aciman, André, Best American Essays 2020,Houghton Mifflin Harcourt, 2020. As you can probably tell, from the previous Recommended Reading Lists and this one, that I loved this book. Even the essays I didn’t recommend are essays that I liked. I don’t think I skipped any of them (and I often do). So the entire book is worth reading. 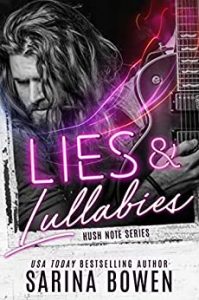 Bowen, Sarina, Lies and Lullabies, Tuxbury Publishing, 2020. Okay, this one is catnip for me. A slightly damaged woman meets a rock star but doesn’t really know who he is. After a lovely summer, he leaves (identity still secret–yes, that’s one of my reader cookies) and she’s pregnant. Fast forward five years…

I love Bowen’s work. This one is flawed. Some of the expected notes are missing. (One scene with the paparazzi? Some forgotten stuff with her past?) I enjoyed the book all the same. Even with the perfect kid as a character, it still worked. In fact, there’s a one-line toss-off about a stuffed horse that made me laugh out loud.

If you need a break from the constant noise that has been this past year, then this book is for you.

Berry, Steve, “Deeds Not Words,” Stories From Suffragette City, edited by M.J. Rose & Fiona Davis, Henry Holt and Company, 2020. I find it ironic that the first story I recommend from this anthology is by a man about a man. Almost all of the other stories (all of them?) have female protagonists. But this story is my kind of story because it’s heavily plotted. Many of the other stories in here are slice of life historical stories that, while well written, leave me a little deflated at the end. This one is a straight ticking clock plot, which was a nice change of pace in the volume.

Cullen, Dave, “The Good Fight,” Vanity Fair, October, 2020. This article is about Gabby Giffords, the congresswoman who got shot about a decade ago, and then decided to take on the NRA. The article was published before the election which brought her husband, Mark Kelly, into the Senate from Arizona, but that’s the only problem with the article. It’s a testiment to a woman who does not give up and whose determination, even as she struggles with serious disabilities from the shooting, has changed all of our lives. Read this one. 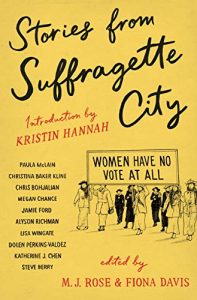 Davis, Fiona, “The Last Mile,” Stories From Suffragette City, edited by M.J. Rose & Fiona Davis, Henry Holt and Company, 2020. “The Last Mile” is the last story in the book and nicely rounds out all of the various threads. I have no idea if the story stands on its own, and I don’t care. It is the one piece that made the entire volume seem cohesive. Endings are more important than beginnings because they determine wheth or not a reader leaves satisfied. This story did its job and then some.

Hochman, David, “The Last Days of Stan Lee,” AARP The Magazine, October/November 2020. This is a very sad article. I almost didn’t read it. I’d met Stan a number of times. I know people who worked with him. They all had mixed feelings about him, and my experiences with him were always cool and distant, not the usual experience that I had with others in sf or comics. But he had a major impact on our culture, and he had a lot of fans who loved him. He did not deserve this kind of end. It’s a cautionary tale, as told to AARP, but it’s also just sad.

Kline, Christine Baker, “The Runaway,” Stories From Suffragette City, edited by M.J. Rose & Fiona Davis, Henry Holt and Company, 2020. I like the side stories in this volume about the people who did not end up at the march to march, but saw it on the way to something else. The runaway in this story is a girl who is supposed to be shipped to the Midwest, probably to work on a farm, but she sees the marchers and…well, any more would spoil the story for you. It’s one of the best stories in the book, though.

Love, Robert, “Bruce Springsteen: A Homecoming,” AARP The Magazine, October/November 2020. I did not expect to tear up reading an interview with Bruce Springsteen, but I did. There’s a lot to unpack in this short piece, all of it good. The one thing that sticks with me is that he describes all of the lives he lived—as a young man, as a parent, now as an older man. He’s describing them as different lives not as one life. I like that. I’m not sure I can handle his new album, though. After 2020, it might hit a bit too close to home.

Perkins-Valdez, Dolen, “American Womanhood,” Stories From Suffragette City, edited by M.J. Rose & Fiona Davis, Henry Holt and Company, 2020. “American Womanhood” tells the story of Ida Wells-Barnett, a famous activist…a famous Black activist, who was not at the 1915 march. Instead, she’s at home in Chicago, because she (rightly) sees this march as being about white women. She did attend an earlier march and her treatment was abominable. The story has passion and power, and is one of the best in the volume.

Perowne, Barry, “The Blind Spot,” The Big Book of Reel Murders: Stories That Inspired Great Crime Movies, edited by Otto Penzler, Vintage, 2019. In his introduction to this story, Otto Penzler says that the story will frustrate many readers. The story made me laugh out loud. Perowne wrote a brilliant locked room mystery…in a way that…well, read it.

Rose, M.J. & Davis, Fiona, Stories From Suffragette City, Henry Holt and Company, 2020. I loved this book. It’s a marvelous interconnected group of short stories that all take place during the October 1915 women’s march in New York for the right to vote. If you get this, you need to read the stories in order. There’s throughline with a little girl and a camera that made me wish for photographs throughout the entire piece. I’ve singled out individual stories, but that’s window dressing. The entire book is marvelous. 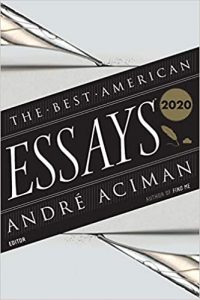 Sullivan, Mark, “Ode al Vento Occidentale,” Best American Essays 2020, edited by André Aciman, Houghton Mifflin Harcourt, 2020. Percy Bysshe Shelley says he was inspired to write “Ode To The West Wind” by a fountain in Florence. Mark Sullivan was in Florence while his wife was teaching there, and he decided to find that fountain. This essay is a nifty look at his search and the things that the search made him consider.

Swarringim, Katelyn, “Caring Companionship,” Oregon Quarterly, Autumn, 2020. I must admit: when I first turned the page to this essay, I thought, Really? Some student’s ode to her dog in lockdown? But my skepticism left by the time I read the first paragraph.

Swarringim’s dog has been deaf from birth. She writes about communication, the love between specieis, and yes, being with a dog in lockdown. Touching and interesting and worthwhile.

Townsend, Allison, “My Pink Lake and Other Digressions,” Best American Essays 2020, edited by André Aciman, Houghton Mifflin Harcourt, 2020. I fought and fought and fought against reading this, since it’s about death. I scanned it, and it didn’t let me out. So I went back and started from the beginning. This is a lovely piece, by a woman who lives in the Midwest, about the passage of life, in a variety of ways.

Ulin, David, “Bed,” Best American Essays 2020, edited by André Aciman, Houghton Mifflin Harcourt, 2020. This essay shouldn’t work. This is an essay about Ulin’s bed, and how it feels, after years, to get a new one. It’s strangely accurate, and a bit too personal, and quite thought-provoking.

Walker, Jerome, “Breathe,” Best American Essays 2020, edited by André Aciman, Houghton Mifflin Harcourt, 2020. Another essay I fought, because I thought the kid in the piece was going to die. So I skipped to the end, realized (SPOILER) he didn’t, and went back, read this, and got furious. I knew that African-Americans and other minorities have trouble in medical offices—hell, I’ve had trouble as a woman, except when I have had a female doctor—but this: His doctor blamed his young young child’s seizures on syphillis because he was Black. Seriously. In addition to all of this outrage, the essay itself is beautifully written, which makes the events even more visceral. Wowza. Ouch.

Wallace, Edgar, “The Death Watch,” The Big Book of Reel Murders: Stories That Inspired Great Crime Movies, edited by Otto Penzler, Vintage, 2019. A very gothic dark story by the very famous Edgar Wallace, whose work I don’t remember ever reading before. There are a lot of elements here that I’ve seen in countless other stories, and yet they seem fresh in this one, even though it’s almost 100 years old.

Winkler, Elizabeth, “Was Shakespeare A Woman?” Best American Essays 2020, edited by André Aciman, Houghton Mifflin Harcourt, 2020. Okay. I’m convinced. I mean, really. I’m convinced. If you want to read this outside of the book of essays (which I recommend. See above). But you can just read the essay itself. Here’s the link. I’m not going to repeat her arguments here. Read it for yourself.