I seem to recall that I didn’t get a lot of leisure reading time last February, and this February was no different. I managed some things, but other projects called, sometimes leaving me too tired to stay up for my regularly scheduled reading time.

I did read a somewhat interesting mystery novel. The writing was stellar—crisp and lovely and funny by turns—but emotionally, the novel had the depth of a drop of water. I did share the book with my sister, because the book was set partially in her home town, but the longer I’m away from the book the less I like it, and I wasn’t even sure I would finish it when I was reading it.

Still, I found some things I really do want to share. Here they are. 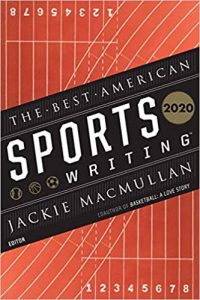 Arnovitz, Kevin, “How NBA Executive Jeff David Stole $13 Million From the Sacramento Kings,” The Best American Sports Writing 2020, edited by Jackie MacMullan, Mariner, 2021.  This seems like a garden-variety embezzlement story, but buried within it is a tale of betrayal so profound that it’s breathtaking. The betrayal isn’t just of the Kings, but of a family. Worth reading.

Dutch, Taylor, “Running isn’t Safe Until It’s Safe For Everyone,” Runner’s World, issue 6, 2020. Two days after the insurrection, I was running in the Arts District here in Vegas. As I crossed an intersection, a white pick-up truck nearly hit me. I yelled “Hey,” mostly to catch his attention, only to hear a slur come back at me.

He followed me down the block, speeding ahead just a little. I went past a coffee shop with a lot of outdoor diners, knowing I could call them for help if I needed to. I thought I’d need them. Because the truck had parked in the middle of the road on the next block.

Only he had found someone else to harass. A Latino skateboarder. The truck driver was getting out of his vehicle, threatening to take the kid’s board as I approached. I yelled again, then shook my fist, and turned slightly so that I could get coffee-shop help. As two people at the coffee shop stood up to come toward us, the driver got in his truck and sped off.

The skateboarder and I had a shaky conversation. Neither of us had gotten the license plate. We were both unnerved. No one else got the information either.

There was a lot of anger that week, and I got harassed a lot. I stopped wearing my favorite shirt, which is from the local Pride Run, just because I didn’t want to get yelled at on a quiet street. Usually that shirt gets me thumbs-up, but not this year.

So obviously, I can relate to this story in Runner’s World. I get harassed weekly on my run, but rarely threatened like I was (and that Latino skateboarder was) on that Saturday. That kind of threat happened to me all the time in Lincoln City. It’s not safe for runners who are not white men. It’s just not.

The people in this article are working to change that, for all marginalized groups. Please read. It’s an important issue.

Foster, Kim, “No Easy Answers,” Desert Companion, Nov/Dec, 2020. This profile of one of Las Vegas’s chefs broke my heart. The man was reduced to helping people put groceries in their car for a few dollars during the worst of the pandemic shutdown. Foster uses this essay and this one good man’s life to show how the shutdown and having no safety net hurt one family. Really worth reading.

Jones, Chloé Cooper, “Champion Moves,” The Best American Sports Writing 2020, edited by Jackie MacMullan, Mariner, 2021.  I love this essay. Jones describes how it feels to be a young reporter damn near anywhere. It doesn’t help her personal case that she kinda sorta snuck into a tennis tournament to see Roger Federer. She wrote this piece based on that experience. There’s a lovely little twist in the middle where we realize why she’s so insecure at a sports venue. It’s beautifully done, and is probably my favorite essay in the book.

MacMullan, Jackie, The Best American Sports Writing 2020, Mariner, 2021. The cuts in traditional publishing began with a lot of the best-ofs, including this one. This is the final book in this series, which is just a damn crime, and if I had enough  money, I would steal this project from Mariner, but of course, I don’t.

The entire book is really good. I think I skipped one essay (too much death), but that’s it. The rest I loved. I’ve listed the best of the essays separately, but all are good here.

Paumgarten, Nick, “The Symptoms,” The Best American Sports Writing 2020, edited by Jackie MacMullan, Mariner, 2021. Paumgarten is a weekend warrior, an amateur athlete into his middle years. He has had his bell rung a number of times, particularly playing hockey. This essay is about the most devastating concussion he got, and the way it continues to have an impact on his life, even now. Worth reading. Beautifully written.

Politi, Steve, “He Told A Kid To Slide. Then He Got Sued,” The Best American Sports Writing 2020, edited by Jackie MacMullan, Mariner, 2021.  Wow. Fascinating court case, filled with all kinds of cautionary tales. This one has a million possible futures in it, which made my sf alternate history writer take notice. Dunno if I’ll do anything, but I sure have been considering it.

St. James, Simone, The Other Side of Midnight, New American Library, 2015. I’m rationing my S 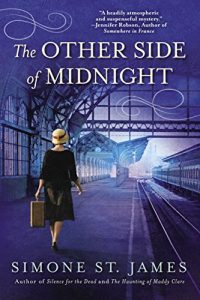 imone St. James books because I don’t see a new one on the horizon (yet). She got me through the pandemic so far. Her books (except for the last 2) are set in the 1920s and they’re creepy and gothic and smart, and they resonate to the now.

This book certainly does. Our heroine, Ellie, works as a medium (which wasn’t an uncommon profession after all that death from the war and their pandemic) and unlike most mediums from the time, she’s actually able to see ghosts. There’s a mystery, a mysterious man, lots of ghosts, and rainy London. What more could you want?

Streeter, Kurt, “Which Way, Richmond? Which Way, America?” The Best American Sports Writing 2020, edited by Jackie MacMullan, Mariner, 2021. An essay about the renaming of a boulevard in Richmond to Arthur Ashe Boulevard, and all that this entails, that complicated web of white racism and Black pride that comes with the American South. Fascinating work.

Vargas Llosa, Mario, “Elegio de la lectura y de la ficción,” (“In Praise of Reading and Fiction”), The Nobel Prize website, 2010. One of the cool things about my return to Spanish is that I’m encountering a lot of really great writing that I would have otherwise missed. This is Mario Vargas Llosa’s Nobel Prize acceptance speech. You can read it in English (or French or German or Swedish), but if you can read the original Spanish, do so. His use of language is so very lovely. I can clearly hear his voice in my head.

It helps that I agree with his points here about the importance of fiction. I think 2020 proved that in a lot of ways, with increased book sales as the world fell apart around us. I also think that those of us who grew up in a terrible environment also knew this intuitively.

This piece is free online. Go read it in your language of choice.

Weil, Elizabeth, “Did Venus Williams Ever Get Her Due?” The Best American Sports Writing 2020, edited by Jackie MacMullan, Mariner, 2021. An excellent essay on the impact Venus had on the sport of tennis, as well as on little girls everywhere, girls including her younger sister Serena. I found myself thinking about this essay for days after I finished reading it, and this essay is the reason I shared the volume with a friend.