Lessons From The Writing Of The Fey—Introduction

Lessons From The Writing Of The Fey—Introduction 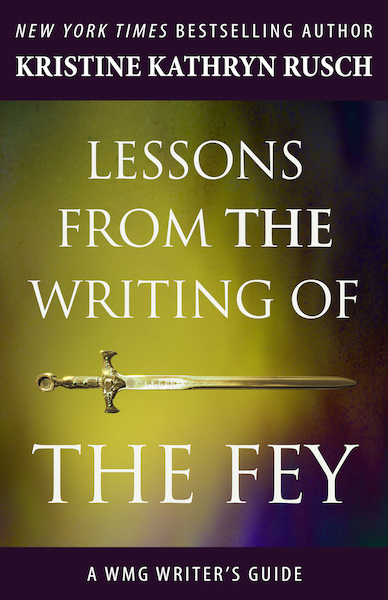 Author’s Note:
We’re running a Kickstarter right now that will give me some deadlines on starting a new Fey project. There’s a four-part book/video/class for readers and writers that goes with that Kickstarter, all non-fiction, all about writing the Fey. I’ve explained in greater depth below.
Part of that project is this: I’m going to post the chapters of Lessons From The Writing of The Fey on my Patreon page first. If you haven’t read the Fey, you can get all 7 ebooks as part of the Kickstarter for $30, and because we’ve hit stretch goals, you’ll also get the new novella and five other ebooks as well as $750 in writing workshops, all for that $30.

What Was I Thinking?

I’m not sure of either of those things sometimes, and sometimes they come back all too vividly.

The Fey saga was born in the early 1990s, which, in publishing terms, is a totally different world than the 2020s. As in another planet entirely.

The Fey saga—the books—have a history, and the writing of the books have another history, which I will discuss in this project. I really need to get the behind-the-scenes story down, before it gets lost to time.

My husband Dean Wesley Smith and I teach online writing classes as a way of paying forward. He heard me complain about some aspects of the Fey that came out of the publishing issues, and he said that would be a cautionary tale for writers.

So, we decided to make this a four-fold project. First, I’m writing a series of blog posts for my Patreon supporters. My Patreon supporters are mostly writers, because I don’t run a Patreon for my fiction. These posts were supposed to be about the writing/publishing/business side of the Fey.

But Dean and I kept talking—which is always dangerous—and we realized that the blog posts were only part one. Part two is the book that some of you are reading now right now—Lessons From The Writing of The Fey.

Part three are videos that I’m making about each of these chapters, and maybe a few other things related to the Fey. The videos are about five minutes long, mostly me recapping the highlights of these chapters or sharing a few other salient details. I’m doing this with readers in mind, much more so than anyone else.

Part four is a class for writers about the dos and don’ts that arise from what I did with the Fey. Dean will narrate those, because he’s really good at structuring classes for writers. The class is very writer-specific, and quite forward-looking, less about the Fey itself than it is about how writers can avoid some of the business mistakes that I made which created the years-long hiatus from the series.

This book, these blog posts, and the videos are going to be a bit of a balancing act, because I don’t want to criticize my own work, but I do want to explain some things. So realize that I respect the story my younger self told, and when I talk about revisiting it, I’m revisiting it to restore it from some of the problems that occurred in the initial publishing (partly because I was a wimp).

I am not revising the earlier books at all. The story remains exactly the same. I am not one of those writers who tries to fix the flaws I had as an earlier writer. I’m a different writer now, sure, but not necessarily a better one. There’s a neat trick in my very first novel, The White Mists of Power, that comes from breaking the rules, a trick I would never do now that I have more education as a writer.

That’s probably a loss on my part. But that neat trick serves a secondary function for me, the older (and not necessarily wiser) writer. That secondary function is this: that neat trick is most readers’ favorite part of my first novel. If I rewrote the book from my older (and not necessarily wiser) point of view, I would ruin the novel.

I am terrified of doing the same thing in the first seven books of the Fey saga, which is why I’m not touching the story at all. I am revisiting all of the books to put them back in my head (something I’ll discuss later in this process). If I touch the older manuscripts at all, it is to restore words and paragraphing that a very bad editor changed or to clean up the remnants of a terrible scan.

Most of that will become clear in later chapters.

But there’s a reason I’m finally revisiting these books in 2021, when I’ve been promising them to the fans for ten years or so.

It’s taken me that long to have the courage to dive back in.

This is a massive project, not just the Fey world itself, but reclaiming it. Doing this nonfiction part of the project is also big, but if I don’t do it now, I never will.

Lessons From The Writing of The Fey is also large, and you can choose how much or how little of it you want to consume. Parts of it will contain spoilers for the books, especially in the chapters about that particular book. If you are going to read the blogs/chapters for Lessons From The Writing of The Fey, I suggest you read the novels first. Otherwise, some of the pleasures you would have as a reader—not to mention that one moment when you’re going to get really, really pissed off at me—will vanish. Your reading experience will not be quite as enjoyable as the reading experience of someone who is coming at the novels without any knowledge of the story whatsoever.

So let that serve as a warning to you.

And for you longtime readers, this is not one of those books that arise out of fantasy novels, such as How To Live Like a Fey (which you might want to reconsider, if it’s on your bucket list). Those kinds of books are fun, and there might be something like that in the future, but not for years.

I have to finish the Place of Power series first.

Lessons From The Writing of The Fey is a bit of a palate-cleanser for me, a way of moving the past into the past. Normally, I like to move beyond what I’ve done before, but the Fey saga is woefully incomplete. There are many, many stories still in my head.

I just needed to revisit these massive novels first so that I got all of the details right. And as I do that, I have to deal with some real-world baggage that comes with revisiting something from my own past.

All of it combined in my life to form a roughly 20-year hiatus from this project. Twenty years is a long time, long enough for me to question whether or not I even wanted to return to the world of the Fey.

But, as you will learn, I set that world aside involuntarily, and I am not usually someone who easily lets go of something important to me. I’ve always intended to come back, but other things got in the way.

I used Kickstarter to move the Fey up the priority list. I figured that once I committed to a new Fey project, I would dive back in and complete all the other projects that I had planned.

I had an inkling of just how big this job was going to be, mostly because the books and the Fey research files have existed on my computer, in my paper files, and on my bookshelf for two decades now.

But until I tackled a reread of The Fey: Sacrifice in February of 2021, I really had no idea of how much work I had ahead of me. Just the reread itself of the first book took longer than expected.

I remembered the story, but I had forgotten that the book itself is incredibly long. It’s 220,000 words. I worked off a manuscript copy that had no page numbers (dumb me) and no word count, so I kept thinking it was taking me forever to review the book. When I realized it was the size of three of my Kristine Grayson novels, I felt a lot better.

The later books aren’t quite as long.

There’s a reason the first book is that long, though, and you’ll find that reason in the chapter about The Fey: Sacrifice.

It’s fun to revisit this world. I had forgotten how much I love it, and how much I enjoy writing in it. I have notes both old and new about where I’m going next in the fiction part of this.

There is no other reason. It’s all external, and all difficult, and sometimes, those reasons still infuriate me. I’m hoping, as I write this all down, that the fury will recede and the joy of project will return without that nagging ambivalence caused by the world as it was.

Because the world as it is, here in 2021, allows me to revisit not only the fictional world of the Fey, but to speak frankly about the mistakes I made, the bad advice I took, the problems in curation of the books themselves, and the unequal treatment I received from the publishing company that originally purchased this project. I can do this four-part nonfiction project as a companion to the Fey books.

The freedom that comes from this new world of publishing, where creators can control the destinies of their projects, makes all of this possible. We’re lucky to have to be living in this new world.

It’s the reason you are reading these blogs and/or hold this book in your hands.

So, sit back and enjoy the story behind the making of the Fey. Writers, be grateful you don’t have only one choice of publishing, the way I did in the 1990s. Readers, thank you for continually asking me for more Fey. I’m not sure I would have revisited any of this without your support.

And now, here we go. To misquote Margo Channing in All About Eve: Fasten your seatbelts. It’s going to be a bumpy ride.

3 responses to “Lessons From The Writing Of The Fey—Introduction”