Spent much of my month catching up on projects, reading for the Holiday Spectacular, and doing some other things that don’t count for the Recommended Reading List. I did start a critically acclaimed award-nominated book on the history of detective fiction and quit very quickly. It was racist AF. Three pages explaining what the Ku Klux Klan was (to tell us that a 1920s fictional detective toyed with joining) and only one paragraph on Chester Himes? Half a page on Walter Mosley? A complete ignorance of the early pioneers of female detective writing? And this from a woman, who apparently wrote the book as part of a publish-or-perish professorship. Awful and offensive. Yes, I’m mentioning it here because…God. Why was that acclaimed?

I saw the same thing with an Agatha Christie bio last year. Whoever picks the nonfiction category in some of the major mystery awards should check their privilege. Yuck.

Then in the middle of the month, my older brother went in for major heart surgery. He died of complications days later. He was twenty years older than I am, and even though we weren’t day-to-day close, we shared a lot of interests, and were often in touch. We would be right now, in fact, since it’s baseball season. So, I dealt with a lot of family stuff, and then collapsed in front of the TV at the end of the day, because my eyes ached and I didn’t want to think about anything.

I climbed my way back to reading after a week, but I don’t have a lot to recommend here. Some of that might just be the circumstances. So what is here is probably really strong to get past my blocks. 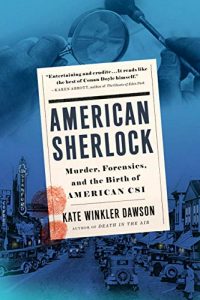 Dawson, Kate Winkler, American Sherlock: Murder, Forensics, and the Birth of American CSI, Putnam, 2020. Fascinating account of Edward Oscar Heinrich who pioneered a lot of forensic techniques, good and bad. She looks at both, and also takes us through some truly fascinating cases. I was familiar with the Fatty Arbuckle case, but didn’t know how the forensics worked. But the most interesting case to me was an attempted train robbery in Oregon, which really went wrong. It was sad and fascinating, and the way he worked out who the robbers were was interesting as well. If you like your true crime mixed with  history and forensics, then this is the book for you. 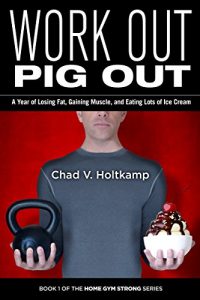 Holtkamp, Chad V., Work Out, Pig Out: A Year of Losing Fat, Gaining Muscle, and Eating Lots of Ice Cream, Briefcase Media Group, 2015. Chad gave this book to me at one of the workshops. He knows I read the occasional exercise book. Weight training is not my thing, but this book appealed to me, mostly because it had “ice cream” in the title. The book is a great analysis of the way that daily/weekly exercise works. Sometimes we’re good at it, and sometimes we’re not.

The book also explained a Dean feature to me. Dean always loads up on food before he launches into an exercise/weight loss program. He eats a lot, then exercises and restricts calories, and then loses a ton of weight. I tried that exactly once and gained ten pounds. I thought this was a Dean thing. Turns out it’s a guy thing. Or an athletic guy thing. I’m not going to pick up the other books in the series, because, as I said, I’m not a strength training person. But if I were, I’d pick up the whole series. 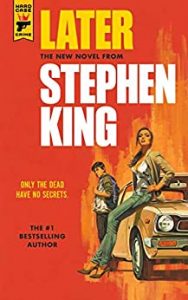 King, Stephen, Later, Hardcase Crime, 2021. Dean picked this book up shortly after arrived and said it had a great opening. I found the opening a very Stephen King opening, with good voice and a nice hook. But the story itself grew on me. I thought I knew where it was going to go, and I was wrong. I also (as usual with King) found myself turning pages late into the night. If you want to escape life for a few hours, pick this one up.

O’Brien, Pam, “A Grief Expert’s Take On Pandemic Anxiety,” Shape Magazine, December 2020. A long time ago, in a land faraway, Dean forgot to click off some opt-out thing on something he ordered and we ended up with (he ended up with) 5 years of Shape Magazine. Of course, I read it. I read nearly everything that makes its way into our place. Mostly “reading” Shape consists of looking at pictures. But this article caught my eye.

I said long ago that our reaction to the pandemic itself includes grief for the world that was. This interview with Claire Bidwell Smith talks about that and more. Her discussion of anxiety in this context is particularly meaningful. The article is short. Go read it. You’ll feel better after you did.

Ruiz, Michelle, “Becoming AOC,” Vanity Fair, December 2020. I renewed my Vanity Fair subscription, now that the new editor has found her voice. I like much of what she’s doing. Of course, I’m behind in my reading, so I just read this piece on Alexandria Ocasio-Cortez. I’m an admirer of hers and wish I had been as savvy and outspoken as she is when I was her age. Even when I don’t agree with her policies, I admire how she presents them. (I feel this way about many of the new Democratic women in Congress.)

This piece was written almost six months before the Capitol siege, where idiots ran through the hallways, screaming that they wanted to kill her (and Nancy Pelosi and Mike Pence). I have no idea how that will impact AOC going forward. I know it would have a major impact on me and how I approach my work.

So I look at this as a letter from the pre-insurrection period. But the article fascinating, especially for the personal history that it gives. I knew some of her story, like Georgetown, but I had no idea what her real history was/is. That’s because the press makes up a narrative (bartender! Working class!) and misses the entire struggle that got her and her family to this point.

Just like the missed the point with this article, and focused instead on the clothes she wore for the photo shoot. Jeez. Why is that the press obsesses about women’s clothes, unless the clothes are actually worn for a purpose, like Pelosi’s pins (and those of Madeleine Albright before her)?

Anyway, read this no matter what your politics are. Learn something. And if you’re going to use my comments section to slime AOC or “the Squad” or Democrats, you will be blocked, even if you send it “just for me.” I’m getting increasingly tired of that crap.