Got more reading in during April than expected. Thank heavens. March was a bit parched.

I started the month with The Best American Mystery Stories 2021, and was greatly disappointed. Most of the stories, while very good, could have been published in 1970 or 1950. They were noirish or hardboiled, almost always about the man, even when they were from a woman’s point of view. If the word “best” hadn’t been on the anthology, I would have been happier, because all of the stories were well written, but very few of them stood out. Looking over the honorable mentions, I suspect the problem was the guest editor, whose taste is obviously not the same as mine.

I started reading Vanity Fair’s Women on Women toward the end of the month because I liked the concept. Women writing about other women, from the pages of the magazine. Some of the articles I remembered reading from more than a decade ago; others are new to me. I’ve recommended a few here. I suspect I’ll have more next month.

Here’s what I liked best in April. 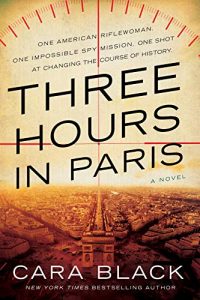 Black, Cara, Three Hours in Paris, Soho Crime, 2020. I have been interested in Cara Black’s work for a while, but I haven’t picked up any of her series novels. This one just looked too good to pass up. A book set in 1940, ostensibly about assassinating Hitler in Paris. Right up my alley. So imagine my surprise when our heroine (and yes, the assassin is female) misses in the first few pages. That’s what I get for not reading the blurb. Oh, and there’s a dead child too, right up front. Blech.

But because Black is such a good writer, I not only kept reading, I couldn’t put the book down. I was in 1940 Paris, I was running from everyone–Nazis, the Resistance, everyone–and it was hot and I was scared and…yeah. This book works. Pick it up if you want to lose a few hours. It’s well done. 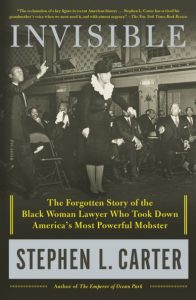 Carter, Stephen L., Invisible: The Forgotten Story of the Black Woman Lawyer Who Took Down America’s Most Powerful Mobster, Henry Holt & Company, 2018. Easily my best read of the year so far. Stephen L. Carter, who has written a lot of fiction I like, wrote a well-done biography of his grandmother, Eunice Hunton Carter. One of the first women lawyers in New York, one of the first Black women lawyers in the prosecutor’s office, her strategy brought down Lucky Luciano. She was intellectual and driven and amazing and quite famous throughout the U.S, not just in the Black press, but in the entire country. And, like so many who aren’t white and male, she got forgotten over the years.
Carter does a masterful job of balancing the truth about his grandmother with his personal knowledge of the woman who, it must be said, wasn’t the warmest human being to her family. In fact, she sent her son away during his childhood and didn’t see him for years. It sounds like she was just as difficult on her grandson.

This is worth the read, not just for the incredible things she did, but the ruminations on the price of success, especially for a Black woman in the 1920s and 1930s. Please do pick this one up. It’s an amazing book about an amazing woman.

Jacobs, Laura, “Emily Post’s Social Revolution,” Vanity Fair’s Women on Women, edited by Radhika Jones with David Friend, 2019. Somehow I had missed all of the information about Emily Post, such as the fact that she was a novelist first, and wrote her etiquette book as a response to an editorial request. She was also a single mother and a woman who achieved her greatest success after forty. Fascinating read, filled with surprises. 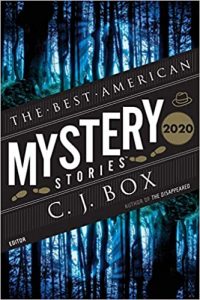 Kohler, Sheila, “Miss Martin,” The Best American Mystery Stories 2021, edited by C.J. Box, Mariner, 2021. A girl comes home from boarding school for the first time since her father remarried. There are some twists and turns here that I don’t dare tell you, because they’re nice. This is a good character study of three people, extremely well done.

Lanker, Maureen Lee, “Romancing The Screen,” Entertainment Weekly, May, 2021. The stupidest named monthly magazine has some great articles this month. This particular article examines the Bridgerton Effect on the entertainment industry. This article actually calls it currently: gender bias was the reason that the entertainment industry never paid attention to the largest selling genre in the world. It was women’s fiction, so who cares? Sigh. 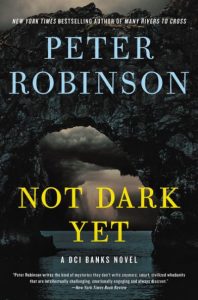 Robinson, Peter, Not Dark Yet, William Morrow, 2021. I’m mixed about this book. On the one hand, I think it’s one of the better DCI Banks novels. On the other, it requires some very smart characters to make stupid choices. I was annoyed at them, even as I kept reading. I didn’t want to put the book down.

This is not the novel I would recommend that you start with for the DCI Banks series. Start, maybe, with In A Dry Season or one of the earlier novels. But do read the series. It’s good.

Sandford, John, “Girl With An Ax,” The Best American Mystery Stories 2021, edted by C.J. Box, Mariner, 2021. The ax in question is a guitar. A quiet crime story, so subtle you might miss the crime altogether. Great setting, and great main characters (the bad guys are…um…bad guys). I always forget how much I like Sandford until I read one of his short stories. I keep meaning to pick up a novel. Maybe I should now.

Stroby, Wallace, “Nightbound,” The Best American Mystery Stories 2021, edted by C.J. Box, Mariner, 2021. The plot is not particularly remarkable, but the story itself is a great example of suspense. Stroby develops the character and the situation while we’re in the middle of a firefight, which is tough to do. The story careens breathlessly forward, forcing you to finish it before you even realize you’re turning pages. 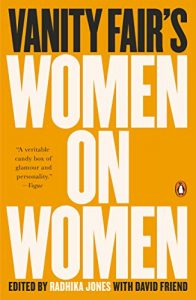 Williams, Marjorie, “Barbara’s Backlash,” Vanity Fair’s Women on Women, edited by Radhika Jones with David Friend, 2019. I hesitated putting this article in my recommended reading list for two reasons. First, it nearly made me stop reading the book. I mean who wants to read a profile of Barbara Bush, written during the 1992 presidential election? And second, to say that I am not a Barbara Bush fan is a serious understatement.

But I soldiered on and learned a few things, such as the horror that Barbara Bush went through when her oldest daughter died as a child. It gave me some (reluctant) compassion for the woman. I was surprised to see coverage of things I thought weren’t being covered at the time, such as Bush’s deep insensitivity to most people and the well-known but seldom reported philandering of her husband. Despite myself, I learned a few things.

Still not sure it’s something you all should read, but for what it’s worth….

Yang, Rachel, “Asian Entertainers Roundtable,” Entertainment Weekly, May 2021. This is a hybrid article. There’s a roundtable with George Takai, Daniel Dae Kim, Chloe Bennett, Olivia Munn, Dianne Doan, and Hari Kondabolu online as they talk with Rachel Yang about the treatment of Asian Americans in the entertainment industry. I didn’t know about the online part; I read the transcript in the May issue of EW. Fascinating stuff and some comments from Daniel Dae Kim will spark a series of business blogs for me. Take a peek at this one, whether you read it or listen to it.