I threw out a book of essays in August. I mean literally tossed the book in the trash. The book was considered one of the best books of 2019 by a whole bunch of mainstream literary reviewers, all of whom are on my suspect list now.

The book is exceedingly well written. The author writes about all the awful things she’s seen in her life…and did nothing about those things. She literally walked away from all of them, and it haunts her. They include walking away from a woman face down in a restroom, drowning in her own vomit. (Did she live? We don’t know.) Abandoning an elderly dog that she could have adopted or helped. Watched dispassionately as a stranger beat his young child bloody…and that’s where I quit.

There are 3 kinds of people in this world. Those who destroy others, those who help others, and those who stand by and let bad things happen. This writer is a bystander. I’ll never buy anything of hers again. Because the bystanders enable the destroyers. And the fact that these events “haunt” her enough for her to make money off them but not to change her behavior disgusts me to no end.

Fortunately, the rest of my reading was pretty good. Some of it was historical short stories, too dated to recommend, but I enjoyed them all the same. A bit of it was weird nonfiction (legal cases, anyone?), but the rest of what I enjoyed is here. 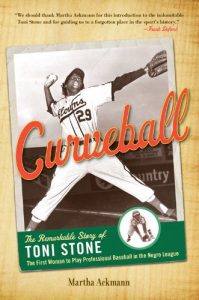 Ackmann, Martha, Curveball: The Remarkable Story of Toni Stone, Lawrence Hill Books, 2010. Toni Stone was the first woman to play professional baseball in the Negro Leagues. A few other women followed her in the Negro Leagues, until the leagues disbanded, but she was the real star. I don’t know who the first woman was to play baseball in the “regular” leagues–which were, in those days, all white.

I got this book in June of 2020 when it looked like there would be no baseball season. I read a number of baseball books then, but not this one. This one is a biography and the problem with biographies is that they always end sadly. Our hero dies. Only in this case, Martha Ackmann skips the sad part and ends with Toni Stone’s day when she was inducted in the Baseball Hall of Fame. Yay, boom! Great way to end what is a difficult story to read.

Toni Stone was a girl who knew what she wanted. She convinced people, in the 1920s and 1930s to let her play with the boys. She was better than they were. And she managed to work her way into professional baseball, not as an oddity, but as a helluva player. She spent a good 15-20 years playing professional baseball, in all of its itinerant forms. She suffered a lot of discrimination as a woman and as a Black person, but she persevered. When the teams traveled to the segregated South, she sometimes had to sleep in houses of prostitution, because there were no hotel rooms for a single Black woman. The prostitutes sewed padding into her uniform’s shirt, so she could handle it when a ball hit her in the chest. They helped her a variety of ways.

She was amazing. Some say that had she been a man, she would have given Satchel Paige a run for his money or later, been drafted into the majors. That’s probably true. Her records were great, and what she put up with to play ball astonishing.

These little pockets of history, the lives of people who wanted something so badly they fought for it in the face of extreme opposition, are fascinating to me. I’m glad to have met Toni Stone. I hope you will like her as well. 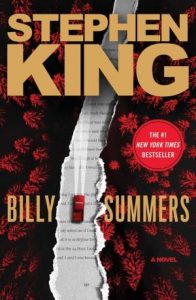 King, Stephen, Billy Summers, Scribner, 2021. King’s latest is a book about writing, which is always interesting. His little side comments as his hitman character tries to write a book, are delightful. He even has another character try to mimic the writing of the hitman character, and guess what? The voice is subtly different.

King is a national treasure, and has forgotten more about craft than I’ll ever know. He’s amazing. This isn’t one of my favorites of his, but it was a great read nonetheless.

Leach, Lily, “Lost and Found,” Vanity Fair, May 2021. There have been so many tragedies in the past year and a half that keeping track of them becomes nigh impossible. This article reminded me that part of Beirut dramatically exploded in 2020, and a photographer was nearby. Many of the city’s historic villas got destroyed, and he managed to photograph the destruction. Because he’s a professional, the photos have an eerie beauty. But what he’s trying to do is important too. Read this one.

Press, Joy, “How Hollywood Writers Won The War,” Vanity Fair, May 2021. I’m very late to this party. I’m finally getting to all of the back issues of my magazines, and I’m slowly working my way through them. An oldish issue of Vanity Fair had this article, and I was shocked to see the information. I had missed it in the move.

I mentioned this war a number of times in my agent posts. The WGA figured out that agents weren’t acting in their best interest (gasp) and not only called them on it, but demanded that they change their behavior.

Agents told the writers to get lost, figuring writers couldn’t live without them. Turns out that writers not only could live without the agents, writers got more work without their agents getting in the way.

Reed, C. Moon, “This Might Hurt,” Las Vegas Weekly, July 29, 2021. This is actually an article about a book that just got released called The Comfort Crisis by Michael Easter. I have not read the book, and probably won’t, but some of you might. The article caught me, though, with some of the discussions. I particularly like this: “…anything that improves health usually comes with some form of discomfort…” Um, yep. Lots to think about in these short piece (and probably in the book too).

Schmidt, Stanley, “The ‘New Normal’ Trap,” Analog, September/October, 2021. Stan caught me with the title, so I read the essay the day the magazine appeared in my mailbox. The essay’s not quite what I thought it would be from the title; he’s very sf focused (which makes sense since this is Analog) and I was hoping for a bit more insight on the way the future might go. But once I shed my preconceptions, I found the essay quite fascinating. I love the ending. So take a peek.

Spartan Connections, Winter, 2021. I honestly didn’t expect to find this little newsletter online, and I’m glad I did. It’s the newsletter for the Superior, Wisconsin School District, which I get because I graduated from what was then Superior Senior High School. (Now, just Superior High School.) This particular newsletter has a series of fascinating short essays by people they label as “community heroes.” (There is no listing of who did the hard work of compiling all of this.) It really is just a timeline of the pandemic. “Just” seems like such a small word. We’re all dealing with our own problems, and we often forget that others have serious issues right now as well. The reading here, from my old hometown, is extremely fascinating. Take a look.