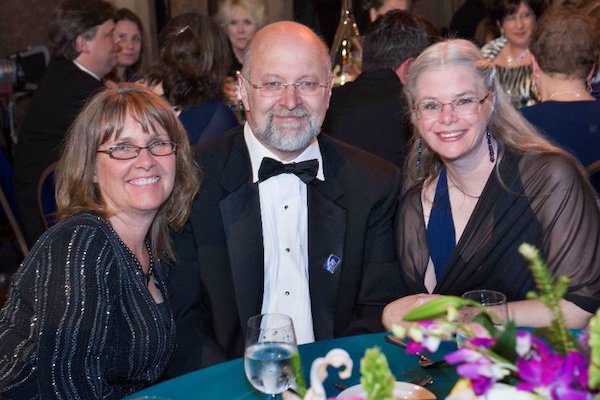 I’m writing this the week that Dave Wolverton died, a man most of you know as writer and teacher, Dave Farland. I first met Dave in 1987 and we’ve been friends ever since. As you’ll note, I’m having trouble with tenses, because to me, Dave is still around, even though he’s not.

Another friend pointed out in a private conversation that Dean and I have had a rough couple of years. We’ve lost a lot of friends. I think that’s a bit of an understatement. I made a list of the friends we’d lost as of Spring 2021, a remembrance that is at the end of Ten Little Fen, my Spade/Paladin novel. I didn’t include non-sf people, like my brother, who died from complications after surgery about a year ago now.

So, yeah, Dean and I have lost a lot of friends and family recently. I’d already dealt with the sheer numbers last year, when I actually looked at them. The downside to having a lot of friends and important acquaintances is that they have lifespans. No one lives forever, and so, when you know a lot of people, you experience a lot of death.

He had a bunch of new friends, including me. His friendships ran the gamut of old-timers, including Ray Bradbury (whom he kept trying to introduce me to and failing because I was too gosh-wowed), and went down to the latest winners of Writers of the Future. (Julie never missed WoTF ceremony.)

But he kept his old friends with him. That slideshow, informative and fun, was a way to attend the convention with those friends even though they were gone.

I don’t think I understood that at the time. I do now.

I don’t have the personal fortitude to do a presentation like that, at least, not now, anyway. I must add that those presentations were particularly fun in the 1990s, when some of the old timers attended. I remember Julie and Sam Moskowitz getting into an argument about something that happened. By then, Sam—a chain smoker—had lost his larynx and had to use an electronic voice box. It cut through everything and was very loud. The argument was intense and entertaining.

Hmmm. And as I write that, I feel the urge to write another Spade/Paladin story. Hmmm.

I’ve been feeling very burdened for the past few years. Some of it has been the fraught political situation. I majored in history with an emphasis on the U.S. and the Constitution. It’s almost my religion. So what’s going on has had a major impact on me personally.

I turned 60 in 2020 (yay, blerg), and I had trouble with the number. For some reason, 60 really bothered me. 61 bothered me more. I don’t feel my age, whatever that means. I’m healthier than I’ve been for decades. But a little voice in the back of my brain tells me that some things waste the time I have left. (Shouldn’t be back in school; what a waste of time. What are you going to do with that?) That little voice got so loud that it became difficult to do fun things, like read for pleasure or go to the theater (once that became possible again) or even go on charity runs.

I still don’t know where that one came from. But it hit at 60, in the middle of Covid.

Living in fear took a lot of time for me. I had to manage the fear, make it recede, deal with it using science and statistics and internal projections.

When Omicron appeared in November, I stared at the falling U.S. stock market and watched businesses all over the world panic in a here-we-go-again kinda way, and realized I could panic too. Or I could put my historian brain to work. I did the latter.

When Covid appeared scientists called it a novel coronavirus. Meaning one we humans have never seen before. Well, Omicron isn’t novel. It’s a variation on a known quantity. Covid-19, in all of its forms, will not be novel again.

The novel is what scared the scientists. Because the virus is new, we still don’t know a lot about it, so aspects are still novel. But it is something we can live with, whether we want to or not, like the human race lived with small pox and other horrid, nasty, terrible viruses that science (and vaccinations) put an end to.

In other words, this is part of being human, like fire and famine and war and all the other plagues upon the houses of humankind.

They’re not pleasant, but they are livable.

I am taking massive precautions. If they want me to get a new vaccine or another booster, I’ll do that. Despite the changes in CDC guidance, I mask up and sometimes double-mask in many places, particularly when I do not know the vaccine status of the folks I’m with. I try to go to places with excellent ventilation. During the stupid surge, I canceled a bunch of things I didn’t want to cancel, because I didn’t like the risk-reward analysis. (Too much risk for not enough reward.)

I’m slowly putting the virus into the category of other everyday life things that can kill me. I get into a car on a daily basis. I drive cars weekly. Sometimes, I drive cars badly. I run on city streets because I prefer that to the safety (and dullness ) of a gym track—which I do use in the summer. I’m not fond of heatstroke.

And on and on.

So, that’s a long way of saying that I’m letting go of the massive fear that I lived with in the past several years. Yes, there are many things that are breaking my heart or making me angry or worry me greatly. But I’m not going to be vibrating in terror any longer…if I can avoid it.

I’ve been clawing my way out of this for some time. I wrote about it in the blog on focus , noting each milestone. But it truly was a claw.

And dammit all to hell, Dave is still teaching me.

Because as I logged onto his Facebook page to see if there were any updates, there, underneath his name, was this: International and NYT bestselling author. Currently working on my final book in the Runelords series.

But that second sentence was a stab to the heart—not just for Dave and his fans—but to my muse.

She’s been a bit slow. I like to say that my muse is two years old, but my real two-year-old self was an abused child. I have no idea if she was hit—although I do remember being slapped across the mouth at the age of three—but I suspect she was spanked a lot. I am still not an obedient person, and I doubt I was then.

So my two-year-old knows fear. Fear is a warning sign of danger ahead; fear makes her hide. Coaxing her out of hiding has been the work of the past two years (and maybe more).

But there’s another aspect to her. The storyteller. The one who is so full of stories that she knows she’ll never get to them all, because each time she finishes one, a dozen more crop up.

That muse saw Dave’s tagline, and took control. The day he died, as I was waiting for more news, I went into my office and got 2,000 words on a story idea I was meaning to get to the following Thursday, at my short-story-writing time.

Nope. Got it underway. Then moved to the next section of the Fey novel…without complaint. (I’d been complaining a lot.)

The past few days, I’ve been writing a lot—and it’s not required writing. It’s not a slog. I don’t spend a lot of time getting myself to the computer. I’m there, focused, and working.

Dave, damn it, made me realize the thing that all humans realize at some point, deep down. We will stop. (I know that.) But we might stop with too many things left undone.

I was writing. Just not like I used to.

As I said, he taught me something one last time.

Just wish the lesson hadn’t been so painful.