Business Musings: What The…?

Business Musings: What The…? 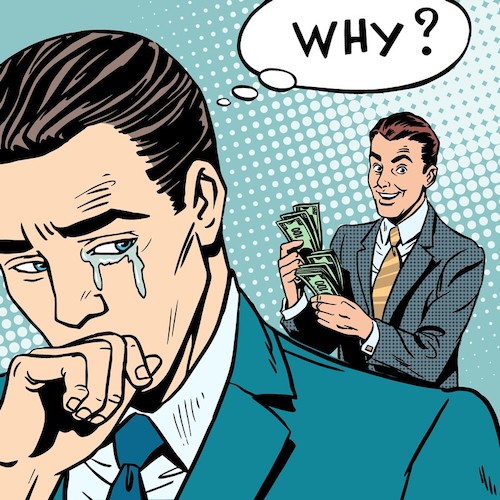 I toyed with a lot of titles for this post, most of which would have insulted those of you who have followed my blog posts for a long time and know what I’m about to say. I don’t want to insult you people.

And then there are the others, the ones for whom this post is intended. There’s a lot I could say, but let’s settle on:

What the ever-loving fuck, people?

The responses to Brandon Sanderson’s Kickstarter from people who should know better have been awful, truly awful. It’s clear that many of you are reacting out of something other than logic.

Before I go any farther here, let me point you to my initial blog post on Brandon’s Kickstarter. I deal with a lot of myths and misconceptions there. Believe me, you’ll want to read this, even if you don’t ultimately feel comfortable with what I’m saying.

Then let’s go with two of the points I’ve seen over and over again, and I’ll leave the rest for someone with more patience than I have.

The two points are:

Oh, and for the hell of it, this one:

Let’s start with the third, because I saw it on several writer boards, some from people who claim to have studied the business of writing.

I say claim because if they actually had studied the business of writing, they would know that all writers license their books to traditional publishers. The agreement between a writer and a publisher is a license, not a sale.

To outright sell a copyright is something that not even traditional publishers ask for these days. In the parlance of the folks who don’t know a lot, that’s an all-rights deal, and even the worst agent knows to avoid that.

Want to argue with me? Go ahead. But first, read The Copyright Handbook  from NOLO Press. And then read your traditional publishing contract, y’know, the one you signed on the advice of your non-lawyer agent. I have a hunch you’ll “forget” you made this argument.

But, Kris, you’ll say, I do understand copyright. It’s just that the bestsellers can license better than we young’uns can.

Um, no. It all depends on the contract and the determination of the people negotiating. Every contract is different. Some bestsellers are great at negotiation. Some know what they want. Some suck at it and will take what’s offered. When I was in traditional publishing, I always had better contracts than my bestselling friends. Not because I had more clout, but because I actually read and understood the contracts, and negotiated the crap out of them.

Now, to the other points. Let’s go with Point 2 first.

And let’s start with a political argument.

Um…folks…what the hell do you think traditional publishing is? Right now, the corporations in the U.S. are so big that they’re eating the smaller ones. (There’s an anti-trust lawsuit about this right now.) The big 5, soon to be 4, are huge companies that are part of multimedia conglomerates, and have fingers in pies all over the world.

These publishers don’t care about some midlist author. Until this March, they didn’t care about a writer at Brandon Sanderson’s level either. Right now, all of the execs are having meetings about Brandon’s Kickstarter because it threatens their business model.

They should read social media. The myths they’ve fed writers are so strong that people who hate corporations are defending the need for traditional publishers.

Oh, and the whole diversity issue? I dealt with that in the previous post. But in a nutshell: traditional publishers are anti-diversity unless they see how it can benefit their bottom line.

Kickstarter is open to everyone. Even the midlist writer. How do I know? I’ve had many Kickstarters. My business offers a free class in how any writer can do a Kickstarter, using best practices. People who follow those practices probably won’t make millions, but they might make the same amount of money on their Kickstarter as they would with an advance from a traditional publisher…without licensing any part of their copyright.

So, ask yourself why you’re peddling this pablum. What part of Brandon’s Kickstarter scared you? All of it? The implied work level? The dollar signs?

Is it just plain jealousy talking here or have you bought into all the publishing myths hook, line, and sinker? If it’s the second point, believe me, I understand. It took me the better part of a decade to disentangle my dreams from the myths of traditional publishing. In some ways, that’s why the first few years of this blog existed. I couldn’t believe that I could make money and control my content, without the help of some “editor” who just graduated from college and a publishing executive who wouldn’t know business if it bit them on the ass (which it usually ends up doing, since publishing executives get fired all the time for not making money for the big giant corporation).

And while we’re talking about content here, let’s add one more point. A friend of mine wrote a long screed about Brandon’s Kickstarter, saying that Brandon was writing to market and that’s why he was doing so well.

If that friend had bothered to read the material on the Kickstarter itself instead of reacting out of…anger? Jealousy? Built-in assumptions about the fantasy genre?…then he would have seen that Brandon wrote these books without a contract and because he wasn’t thinking about the market.

Please, people, do the rest of us a courtesy. If you’re going to get on a high horse about something, make sure that you’ve actually looked at that something before going off on your own weird, pointless, and ultimately dumb tangent.

But let’s unpack this little gem of an argument in two different ways.

First, you people seem to assume that Brandon knew he would make tens of millions of dollars on this Kickstarter. That’s not how Kickstarters work.

He asked for one million dollars. That’s what it would take to fund the Kickstarter, and given his previous Kickstarter, I’ll wager he hoped he’d get five million. But he clearly would have been happy with one million.

Let’s examine that, shall we?

With the cost of goods and shipping and labor, not counting his own time, at one million dollars, he probably would have cleared $400,000. I’m guessing based on numbers a friend who knows the cost of those swag bags ran for me on this.

Which is a traditional publishing level advance…without the payment shenanigans. He’d get the money up front instead of spread over four years.

That’s it, people. That’s running a business, not being greedy, as most of you are saying.

Where the hell do you folks get off saying that writers need to limit their earnings? None of you complain when movies make millions. Or when your favorite publishing house clears multimillions every year.

So what is wrong with a writer making a lot of money on his art? Hmmm?

Once again, you need to look at your own assumptions here. Apparently you believe, like my friend, that the only writing of value is stuff for which the writer earns next to nothing. And the only way a writer can make a fortune is to sell out.

Recognize that myth? It’s an ugly one.

Finally, because this is the part that pisses me off the most, you writers are insulting readers.

This is a reader-sponsored campaign. Readers are giving him money to read his work.

Isn’t that what we all want?

And if you look hard at the categories, you’ll see that by far the biggest number of backers are in the $40-160 range, where what they get are the books.

That he wrote without a contract, during the pandemic, because the ideas grabbed him and wouldn’t let him go.

What is wrong with you?

I don’t want you to defend yourself here. I won’t post what you have to say.

But most of what I’m seeing all over social media comes from one of two places: 1) jealousy (doesn’t he have enough money already?) or 2) the myths (why isn’t he doing this through traditional publishing?).

Most of you I can’t help. You’re too deep in your own assumptions to respond with anything but anger to this post (as well as to the Kickstarter).

But I write this for two reasons.

From the perspective of point 2, let me say, I think that what Brandon is doing is good for all writers who understand business and know how to take advantage of this.

If you don’t know how to take advantage of this, check out the free class. If you do, then you’re probably as excited about this opportunity as I am.

What opportunity? Some of you ask. Check out the previous post. It’s all there for you, if you can open your mind enough to understand it.

“Business Musings: What The…?,” copyright © 2022 by Kristine Kathryn Rusch. Image at the top of the blog copyright © Can Stock Photo / studiostoks.

24 responses to “Business Musings: What The…?”