After a tumultuous two weeks, I’m returning to my blogs about the Las Vegas Licensing Expo, held in May of this year. Because I had an unexpectedly rocky start to June (chronic health fun), I wasn’t able to write the planned second blog about the longevity of licensed properties on the day that I planned.

Probably a good thing, when looked at with a cold jaundiced eye. Because a few things happened in between that we should all pay attention to. I’ll get to those two things next week.

By the end, we knew that the future was still out there, and the future of licensing was even brighter than we had expected.

While I was making that mental transition, I spent hours walking the floor, just looking at things. Dean focused down in the most minute detail, but I was looking at the overall scope of the expo—of licensing in general, really.

And what caught my eye were the licensors—people who licensed out, people who had intellectual property and were licensing other people and other companies to create a derivative work from that original IP. (If all of this is gobbledygook to you, then pick up The Copyright Handbook and read it.)

I saw very few new brands. I saw several new-to-me brands, but all of them seemed to have been around for a while. Some of this was a function of the truncated nature of this year’s licensing expo—many people, particularly new people, were willing to take a risk—but some of it was simply smart business on the part of licensors.

As far as these licensors were concerned, their intellectual property was a living, breathing thing, something that could be marketed, licensed, and exploited no matter how old it was.

For those of us (which is most of us) brought up in the world of publishing (and even movies) in which the newest thing was the most important thing and anything published/produced in the past year was old, the idea of IP as a continual living, breathing thing, is a difficult one to comprehend.

In publishing—even in indie publishing—too many of us have the idea that what we produced in the past is worthless and what we’re producing now is worthwhile.

That is soooo untrue. If you walk the floor of the Licensing Expo, you soon realize that the older the brand, the more valuable it is—provided that the IP remains in the hand of the creator. (Otherwise, it’s valuable to whoever bought it, which is a whole other tangential blog that I’m not going to write.)

At our suite in the evenings, I heard a number of writers talk about licensing their current project, but I also saw a few licensees (folks who can create a derivative work like a game or a t-shirt) glaze over when the word “current” was mentioned.

Unless the current thing was trendy—like a Stranger Things-esque project or something similar to the Marvel Universe—no licensee was interested. They wanted a proven project, something that had a long and established fan base. 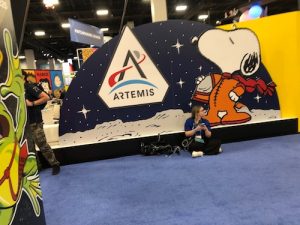 I guess the thing that shook me out of those mental doldrums was this: 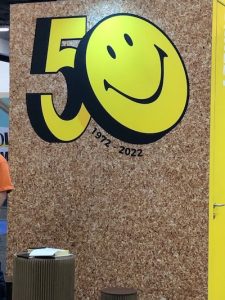 The Smiley Face, which was introduced when I was twelve—and was weirdly controversial back in them thar days—is still around, and still licensing. In fact, the Smiley Face has a fascinating (and tortured) copyright and licensing history, filled with litigation, profit, and angry altruism. Ultimately, though, the IP for the Smiley Face is owned by the Smiley Company, which has held the rights for fifty years.

Fifty years. And the company is still co-licensing with everyone from Guns N’ Roses to Urban Outfitters, with no sign of slowing down.

A few booths away, I stumbled onto Ringling Bros. Yep, they’re licensing too. Apparently something called The Feld Company is “reimagining” the franchise, and has big plans for 2023. 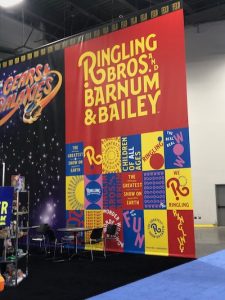 The licensor that startled me the most, though, was this one. 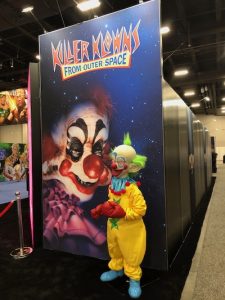 Killer Klowns From Outer Space is one of my favorite B- (D?) movies, so gross and campy and fun and scary that I’ve never forgotten the first time I saw it. The property is owned by MGM. Someone in their marketing department realized that horror iconography is really big right now, and they revived the Killer Klowns.

MGM had a specific area set aside for Killer Klowns. I’m sure that there were years in which MGM hadn’t even thought of that property, but like any savvy business owner, they examined what they had in their IP inventory and revived the material at the right time.

We don’t always think about the longevity of IP. Some of it is as common as the air we breathe.

But the Marvel Cinematic Universe is based on IP created in the early 1960s. The photo I displayed with the first blog in this little discussion was from the movie Dune, based on a novel first published in 1965.

Barbie was a big player at this year’s Licensing Expo, in part because someone got the bright idea to make a live-action Barbie movie (please. This scares me more than Killer Klowns), but also because Barbie has always had an oversized licensing presence, ever since she made her first appearance in 1959.

I’ve been spending this past year working on something a friend called an “old” project. My Fey novels first came out in the 1990s, but there’s nothing about them that says 1990-specific. The world is still fresh and new in my mind, and walking around the Licensing Expo, I found a lot of possibilities for products based on the Fey. Even talked with a few folks about making those become real.

We’re taking it slow, more or less. First we are rebranding the original series, and then we’re figuring out other licensing projects.

I came out of the Licensing Expo with a firm awareness of the possibilities of all of my IP and a great sense of being overwhelmed by the sheer volume of work.

There’s a reason that major companies have a licensing department. It takes a lot of focus and know-how to make licensing work.

If you don’t understand what I mean, then get that Copyright Handbook, because you’re making a lot of mistakes right from the get-go.

Next week, we’ll talk about the two licensing items that came up after the Expo. Before we do, please, please, please head over to Dean’s blog and read his post on trademark. You’ll save me a lot of time and effort if you do. Otherwise a lot of you will ask questions that he’s already answered here.

Every time I go to the Licensing Expo, I’m startled at the amount of money an IP can earn through licensing. I’m even more startled when I realize just how much money all of us book writers are leaving on the table, because we never consider licensing as something that we can do—even though we do it all the time.

I think the Licensing Expo is something that all serious writers should attend at least once, if for no other reason than to see why you need to hang onto as much of your copyright as you can. It’s valuable in ways you can’t even contemplate at the moment.

I’ll talk more about that next week.

Licensing Global just announced the dates for the 2023 Expo. It will be held at Mandalay Bay here in Las Vegas, starting on May 23 and going to May 25. It’s free for attendees, if you actually own a business or IP. If you’ve never come before, then you need to walk the floor without any expectations. It’s quite a learning experience.

And…here’s the rest of your reminder that this weekly blog is reader supported.