Well, May was super busy, with finals and a workshop that I was teaching and the Licensing Expo. I got behind writing up the recommended reading, and then I got sick in the first part of June, so I couldn’t finish this.

I did manage to read a startling amount, though, considering I was also reading manuscripts and I was gone much of the time. What got lost in my usual reading was the articles. I know I read a few, but I didn’t keep adequate track. And then, by the middle of the month, I wasn’t doing much reading at all of things like magazines and news articles. There will be more in June. I promise.

Here’s what I liked (not including manuscripts) from May. 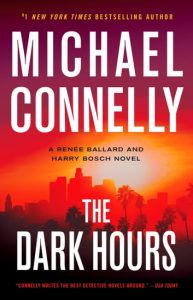 Connelly, Michael, The Dark Hours, Little, Brown, 2021. Michael Connelly’s first book featuring Renée Ballard was hugely annoying. It was clear Connelly was uncomfortable writing from a woman’s point of view, so he interviewed someone (someones?) and guessed, not thinking of women as people, but as other. And…the book didn’t pass the Bechdel test on any level. This put me off any book of his with Ballard mentioned on the cover. I read a later book featuring her and it was…better…but jeez. Connelly had become quite uneven.

However, I like Harry Bosch, so much so that I have trouble with the TV show because Titus Welliver just isn’t Bosch to me. Bosch (whom I’ve been reading about for years) looks like Connelly. (Read the description; you’ll see what I mean.) It didn’t help that until Bosch, Welliver mostly played slimy villains.

So I bought The Dark Hours last year, but I kept putting off reading it. I really didn’t want to read a misfire. But something changed in May. Mee, my mood, my attitude. I have no idea. Anyway, I picked up The Dark Hours and it was vintage Connelly. He seems to have mostly solved the Ballard problem. He’s finally comfortable writing from her point of view. And the story is good, suspenseful, and ultimately, powerful. So I’m happy to report that I can recommend this one, and I do. 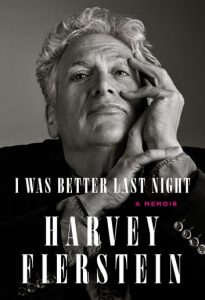 Fierstein, Harvey, I Was Better Last Night, Knopf, 2022. This is Fierstein’s memoir. It’s wonderful. Let me restate: It’s wonderful. He’s as honest as possible about himself and his life, which is interesting, but what interests me the most was his theatrical life in New York. How he stumbled into writing, and how some acting gigs surprise him as well. The people he worked with, and the people who backed him throughout his life. His brother, for example, is a lawyer who handled all of his business affairs. (I love this:  He said if his brother mishandled them, then his nephews won’t inherit much. It doesn’t sound like his brother mishandled anything.) If you like the theater, and if you like Harvey Fierstein, this is really worth reading. 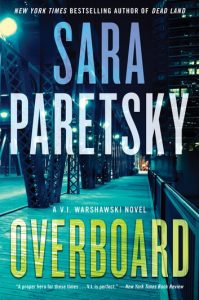 Paretsky, Sara, Overboard, William Morrow, 2022. In her acknowledgments at the end of the book, Paretsky discusses how hard it was to write this novel. The pandemic left her unsettled and frazzled and the book wasn’t coming out easily. I can relate. That was my writing experience during the worst of the pandemic as well. Other writers escaped into their worlds; I wasn’t able to, and Paretksy said she had difficulty as well.

Which only goes to show the old adage that writers have no idea how good a work is, especially if they’re basing their opinion of the work on the experience of writing it. There’s nothing to show that Paretsky had trouble writing this novel. It’s spectacular, and I say that as someone who really isn’t enjoying reading books written about the years of the pandemic. Paretsky’s detective V.I. Warshawski is battling the world as she always does and the pandemic as well, with masks and the introduction of vaccines, and all that caution we were struggling with in January of 2021 (and yes, she does deal with the insurrection as well). The pandemic is central to parts of the story; the stupid insurrection is just unfortunate because you can’t leave that elephant alone in the room.

The book is tense and suspenseful and impossible to put down. I always like Paretsky’s novels. I love this one.

Sancton, Julian, “What Lies Beneath,” Vanity Fair, February, 2022. This is a fascinating article about politics, wealth, theft, and shipwrecks. The Spanish Galleon San Jose went down in a storm in 1709 (and take a look at the lovely artwork accompanying this piece for the storm). The galleon had what Vanity Fair calls “billions” in treasure inside. Wreck hunters have searched for this ship for centuries. A secretive organization says they found it, and the Colombian government said they knew where it was. This sparked all kinds of controversy. Attitudes toward shipwrecks have changed over the years, and now some see taking things from a wreck as robbing the dead. Not to mention the “billions.” Do they belong to Spain or is it finders keepers? Definitely worth reading.