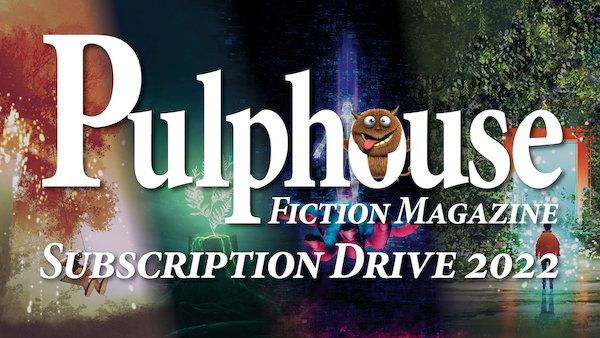 I’ve been doing a lot of magazine reading this past month. I’ve also, for reasons that I won’t go into, have found out about a whole bunch of new-to-me fiction magazines. What I find fascinating about all of them is that while they have a voice and a point of view, they’re all genre magazines. They have a lane and they stay inside it.

Then there’s Pulphouse. From its very first incarnation thirty-some years ago, Pulphouse had no defined genre. That’s one of its selling points. The revived Pulphouse—which is up to 19 issues now—is exactly the same. No defined genre. It encompasses many genres. But it has a definite voice. The stories are all unexpected in one way or another, and every single one of them is entertaining. Dean Wesley Smith has edited this incarnation from the start and he’s doing a tremendous job.

During the pandemic, most publications consolidated. We increased the number of issues to six. So there’s even more fiction now.

Now it’s time for the Pulphouse Subscription Drive. We don’t send mailers. We don’t nag when the subscription is up (although we do notify you). Instead, we hold a Kickstarter.

Everyone who backs the Kickstarter and chooses a reward will get a six-issue subscription. But there’s a lot more here. From anthologies to collections to writing workshops, the rewards include something for reader and writer alike.

So head on over. The Kickstarter is one of our shorter ones, so you have a very limited time to subscribe and get cool stuff. Take a peek. You’ll have fun just looking, and more if you subscribe.