I finished a book by an author I love at the start of the month, then spent two weeks trying to decide if I want to recommend it. The book doesn’t really work. She left out depth entirely, so all we had were these great characters (related to other great characters of hers). She had experimented with something difficult and didn’t quite pull it off. Yet I read to the end.

I finally decided not to recommend the book because I have read her previous four books and brought a lot of history with these characters to the new one. I don’t think it’s a good place to start with her work. I have recommended novels of hers in the past, and I hope to recommend more in the future. This one caused me quite a bit of consternation, though, as I thought about all that I wanted to say in the recommended reading. Finally decided that I just couldn’t give the book an extra boost.

Read a lot of magazines, but most were about business stuff that will date quickly. The summer issue of On Wisconsin was particularly interesting.

My reading slowed way down in August, and I didn’t find out why until the end of the month. My glasses prescription was so far off that I couldn’t read my phone screen. My eyes were getting exceptionally tired when I read print. So I didn’t read as much. And…here’s the truth of it…I wanted to see Stranger Things Season 4 before school started. I watched an hour per night for two weeks, but that was in my leisure reading time. (Dean’s not a fan.) So I really cut back on reading in two ways.

I read the Baxter after trying a couple of other books for my dip-in-and-out reading. They were dull. I ordered some books that look really interesting, so I’ll be back to those shortly.

I do have things to recommend, but it’s an eclectic bunch of stuff. I think you’ll like it all, though.

And a reminder: if you want more to read, check out the Fey Kickstarter. It’s only got six days left, and already we’ve hit several stretch goals. That means that for $5 you can get the new book, The Kirilli Matter, early (and cheaper than usual), as well as several short stories and some writing workshops. Or you can splurge and get a larger reward filled with fantasy novels and other fun things. Take a look…

Barnidge, Sandra Knisely, “These Boots Were Made For History,” On Wisconsin, Summer 2022. I love reading about pioneering female scientists, particularly those who wouldn’t listen to anyone who told them no. This short piece looks at Harriet Bell Merrill who, after her graduation from the UW in 1890, did pioneering field work in South America. Worth reading. 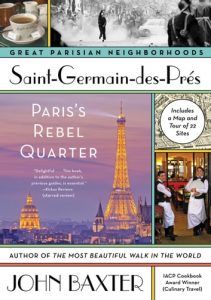 Baxter, John, Saint-Germain-des-Prés: Paris’s Rebel Quarter, Harper Perennial, 2016. I love Baxter’s writing, but this book was billed as a travel guide so it sat on my shelf for five years. Finally, after a small mountain of books disappointed me, I pulled the book off the shelf. I figured that Baxter wouldn’t disappoint, and whoa, he didn’t. This is more a series of essays about a Paris neighborhood than any kind of travel guide. I mean, they pretend at it being a travel guide, but it’s more a history of a certain part of Paris, filled with fascinating tidbits. Some of this is sad—I had no idea that Sylvia Beach died alone—but not all of it. It did what a travel guide should, I suppose. It made me want to return to Paris Right Now.

Carter, Geoff, “Elvis Slept Here,” Las Vegas Weekly, June 30-July 6, 2022. When the Elvis movie came out, the Weekly did some articles on Vegas’s ties with Elvis. This is the most interesting one, but if you click on the link above, you’ll find a few others as well. The Weekly did some work separating the man from the myth, especially as he relates to this town. Enjoy.

Moe, Doug, “The Fight For Title IX,” On Wisconsin, Summer 2022. I have a memory of being at the University of Wisconsin-Madison when I was a teenager, and having someone describe to a group of us girls how very important Title IX was. My brain put that in my 12th summer, which was when Title IX passed, but after reading this, I realized it couldn’t have been the summer of 1972. Madison, like so many schools, had trouble implementing Title IX. Lots of opposition from the men, particularly those in charge.

I thought and thought and thought about it, picking apart my memory until I realized that there were a number of girls in the room. There were a lot of us. It had to be Badger Girls State. I was a delegate when I was 17, and thought I was going to go into politics. I learned a lot during those few days that I still use, and it’s cool to see that BGS continues, albeit in Oshkosh (!) instead of Madison.

Anyway, the fight for Title IX was amazingly hard. Doug Moe explains all of it, focusing on Kit Saunders, who managed to bring women’s athletics in the state from nearly nothing to a powerhouse in just a few years. I ordered the book that the article is excerpted from and just got it. Poor Doug. Someone gave the book a horseshit cover. But I’ll read it anyway. This is fascinating. Robinson, Mark A. with illustrations by Sandra K. Simpson, The Magical Mice of Broadway, BookBaby, 2021. I looooooove this book. It’s a children’s book, written during the heartbreak of lockdown and all the theaters being shut down. Mark A. Robinson writes about theater, and essentially with the loss of live theater, his livelihood and his love went away. So he imagined the mice in the Broadway theaters ensuring that the show does go on. Sandra K. Simpson did some lovely illustrations. This little book made me happy and it made me cry. It’s a bit pricey, but if you love the theater and you love magical stories, this one will warm your heart.

Schmitt, Preston, “UW Secrets, Mysteries, & Hidden Places,” On Wisconsin, Summer 2022. Completely cool article about the hidden places at the University of Wisconsin-Madison. I had heard of some of these, but not all. You can bet this issue of the magazine is going on my bookshelf, with other Wisconsin lore. I think this will be fun for all of you to read, not just you Wisconsin grads.