Read a lot this month, but much of it was academic articles in Spanish for one of my classes. You can thank me for not recommended any of those. I also read some great unpublished novellas, but I’m afraid you won’t be able to find them…yet. If the writers let me know when/where they’re published, I’ll let you know.

Otherwise, what you’ll find below are the books I liked the most as well as some articles…in English…that I liked.

Baxter, John, Montparnasse: Paris’s District of Memory and Desire, HarperCollins, 2017. I love these little books, and I didn’t think I would. They’re “guide” books, but a lot of what’s in here doesn’t exist anymore. In fact, the book ends describing The Jockey, which was a hangout in the 1920s and 1930s, but was torn down long ago. The design is annoying because the publisher keeps trying to make this into a regular guidebook, so it interrupts the flow of a chapter to “highlight” something that doesn’t need highlighting. But the anecdotes are amazing and marvelous and fun. I knew about Hemingway and his friends, but didn’t know how people like Man Ray lived or people who were famous for being famous, back in the days before the internet. A fun read.

Carter, Geoff, “Iconic Las Vegas,” Las Vegas Weekly, July 21-27, 2022. The Las Vegas News Bureau has started an archive of the city in pictures. It is sooooooooooo cool and such a great resource. Here’s the article that notified me about it. Check it out!

Cullins, Ashley, “That Was My Idea! How Hollywood is Avoiding Theft Claims,” The Hollywood Reporter, August 10, 2022. Writers (and folks who like film) need to read this one. It explains why so many lawsuits between people who “had the idea” and the big guns fail. It often isn’t money or the quality of the lawyers. It’s the quality of the proof. The article is short. Take a look.

Feinberg, Scott, “My Purpose is to Create Music That Can Heal,” The Hollywood Reporter, July 28, 2022. Lizzo’s music has been a complete joy for me on my runs. I really love what she’s doing, and that was before she played a flute (my old instrument) so beautifully at the Smithsonian that it made me cry. This interview with her is a revelation. It talks about inspiration, the importance of teachers, and the way that even the smallest opportunity opens large doors. (The link takes you to the podcast. The paper version of THR has the full interview.)

Gaber, C.L., “This River Just Keeps Rolling,” rjMagazine, Fall 2022. A must-read for all writers. This little article is about romance writer Robyn Carr, whose Virgin River series was turned into a Netflix series in 2019. Writers need to see Carr’s attitude about the filming of the show and her own involvement. Spoiler: she says (and expands on), “I made the decision not to get too involved. I don’t make movies. I don’t make TV. I could totally screw it up.” There’s a lot more here. Worth reading. Giardina, Carol,“SAG-AFTRA: Deepfakes Pose A Threat to Performers Livelihoods,”The Hollywood Reporter, July 20, 2022. Very short, but very important piece, about the way that computer technology has evolved to harm performers and others. This isn’t just about faces and actors. It will also become an issue for writers and musicians and everyone else who makes a living off their art. You writers all need to follow this.

Hochman, David, “The Grandmother of Juneteenth,” AARP The Magazine, June/July 2022. A lovely “as told to” in the words of Opal Lee, the woman who fought to establish Juneteenth as a federal holiday. I had heard of her, but I hadn’t heard of all she had done—starting in 2016, when she was nearly 90. Read this. It’s free, inspiring, and will only take a moment of your time.

O’Connell, Mikey, “Steve Martin Isn’t Done Yet,” The Hollywood Reporter, August 10, 2022. Fascinating article on how to have a decades-long career. What I love most about this piece is that it teases that Martin wants to retire, but can’t find the time. Life and projects and the work still interests him. I find that greatly inspiring. Worth the read.

Rio, M.L., If We Were Villains, Flatiron Books, 2017. I adore this book. I savored it. Set in a school that specializes in the arts, the novel has that claustrophobic atmosphere that I seem to love. The book focuses on seven theater students in their final year of college. They only perform Shakespeare, and there is a lot of Shakespeare in this book. A lot, a lot, a lot. If you know the Bard, then you’ll see how this is playing out. If you don’t, you’ll enjoy it anyway. There’s murder and lust and anger and destroyed friendships…pretty much everything you find in Shakespeare. I do have to share the spectacularly ugly cover. I have never seen an indie published book with a cover this bad, and this book came out of traditional publishing. Whoever thought the font and the vines were a good idea should have been fired. Oh, wait! This is a 2017 book. They probably were laid off long ago.

And, sadly, as far as I can tell, this is M.L. Rio’s only published novel. Don’t know if that’s because she writes slowly or because the sales of this one were below expectation. (Gosh, do you think it was the cover?)

Read the book despite the cover. It’s worth your time.

Sharp, Anthea, The Perfect Perfume and Other Tales, Fiddlehead Press, 2019. I got a copy of the paperback of this wonderful little book through Anthea’s Kickstarter. Usually, when I recommend short story collections, I highlight some favorite stories, but it’s almost impossible for me to do that here. Most of these stories first appeared in Fiction River or some other WMG publication. So, let me just point out the collection and say this: if you like alternate history, particularly steampunk, you’ll love these stories. 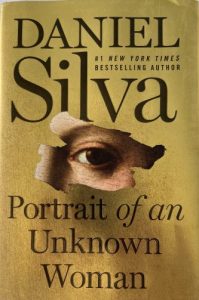 Silva, Daniel, Portrait of an Unknown Woman, Harper, 2022. I had to laugh when this book showed up in the mail. (I preorder a lot.) I was in the thick of the romance spies workshop, and I expected another spy novel from Silva. Instead, he wrote a…well, I thought it was going to be a caper, but it was a heist novel. All about the international art world. And of course, Gabriel Allon was in the thick of solving it all, because nothing happens on the worldwide stage without him.

I’ll be honest: I had wondered what Silva was going to do this year. It was clear from his afterwords in the previous few books that the Trump era was discouraging to him. Then his comments on January 6, which upended his previous book, were very pointed. I think it would have been hard to write a spy thriller in that first year post-Trump, simply because we weren’t sure how things would shake out. We’re still not sure, but we’re on a path, and that’s helpful. Now I want to see what Silva will do next year.

This year’s book, though, was a lot of fun. It was exactly what I needed in a difficult summer. Some place to disappear into with characters I liked, characters who actually have a moral compass. Worth reading.