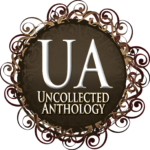 uncollected: not collected or gathered together

oxymoron: a combination of words that have opposite or very different meanings

The Uncollected Anthology series is indeed an oxymoron. Sprung from the minds of seven fabulous authors who love fantasy, short stories, and each other’s writing, the series’ main goal is to bring you quality urban fantasy fiction.

Every three months, the authors pick a theme and write a short story for that theme. But instead of bundling the stories together, they each sell their own stories. No muss, no fuss—you can buy one story, or you can buy them all. (We’ll be honest: we hope you buy them all!)

Uncollected Anthology: When you can’t get enough of the stories you love. 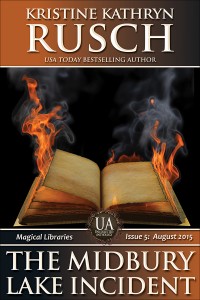 Mary Beth Wilkins knows she made a mistake the moment she sees her beloved library burn. She also knows what she must do next to protect herself and her secret. And although she failed to save this library, she has a more important purpose to fulfill—a magical purpose. If she acts fast. 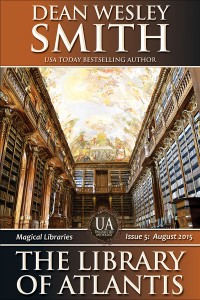 “The Library of Atlantis” by Dean Wesley Smith

To save the fabric of all things from unraveling, whatever that means, Poker Boy must go to the Library of Atlantis and do something that no one ever accomplished before.

“[The Poker Boy] series is unlike anything else out there. It’s quirky and a lot of fun.”
—Amazing Stories 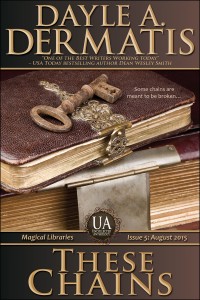 “These Chains” by Dayle A. Dermatis

Madeleine works at a secret library beneath the New York Public Library, serving her final magical-juvie sentence. If she keeps her head down and does her time, she’ll finally be free. But when the most prized—and most dangerous books—are stolen, the ancient ones affixed with chains, all eyes turn on her.

The Magical Council tells Madeleine to sit tight; they’ll handle it. Madeleine, however, isn’t any good at waiting for someone else to solve a problem. She has to get involved, even if she ends up being found guilty for doing the wrong thing for the right reasons…yet again. 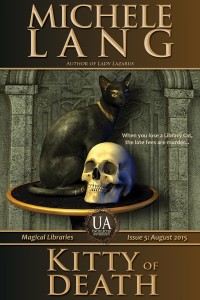 “Kitty of Death” by Michele Lang

When you lose a Library Cat, the late fees are murder…

Corrie the Cat Librarian leads an orderly life in the strange little town of New Castle, Connecticut. As Keeper of Feline Deities, Corrie lends her cats out to magicworkers who need a familiar to complete their spells.

A safe and rather boring existence…

But when Idris, a minor Egyptian deity, goes missing, Corrie and the formidable litigomancer Elizabeth Royall must battle an evil, medieval necromancer bent on capturing death itself. And in the process, Corrie discovers the deadly power of a quiet magic.

“Lang is a writer to watch.” —Booklist 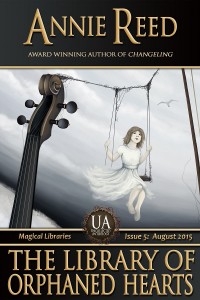 “The Library of Orphaned Hearts” by Annie Reed

The books in Gretta’s library contain something far more precious than words. Something she lost herself in her youth and thought gone forever until a stranger made of shadows and smiles handed her a key and a book she couldn’t read.

The books in Gretta’s library can never be purchased, only loaned, and only to those truly in need.

The books in Gretta’s library can change your life.

If you’re brave enough to ask. 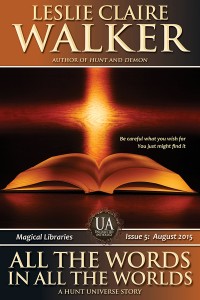 “All the Words in All the Worlds” by Leslie Claire Walker

When Chris Garcia reads the magical morning Metro section of the newspaper, one and only one article stands out: a girl named Alice must find something precious she’s lost before nightfall or go to Hell. Chris figures his newfound magical skill of finding the lost will save her. Instead, he walks straight into a trap. If he fails to find a way out before the sun sets, he dooms Alice—and himself—forever. 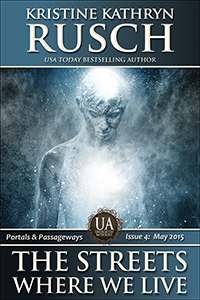 “The Streets Where We Live” by Kristine Kathryn Rusch

When Portia receives a call from an old friend she hasn’t talked to in years, she knows something terrible has happened. But when Portia realizes just how terrible—fifty kids missing from a Chicago theater with millions of dollars in damage left behind—she knows she’ll need backup from her magical sisters. Nothing about this latest case makes sense, magically or otherwise. And when she finally starts to discover the truth, Portia realizes that truth might be darker and more insidious than she ever imagined.

“Save a Prayer” by Dayle A. Dermatis 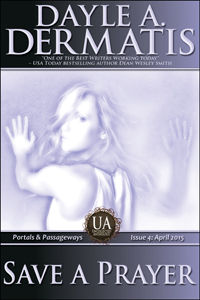 Former Hollywood party girl Nikki Ashburne sees ghosts—in fact, many of them are her friends. Okay, they’re kind of her only friends. Most ghosts stick around because they’re happy here and have no desire to move on. So when she encounters a trapped and, quite frankly, batshit insane member of the formerly living, she’s driven to help…even though she hasn’t a clue how.

This story is part of the Ghosted urban fantasy series featuring Nikki Ashburne.

“War on All Fronts” by Leah Cutter 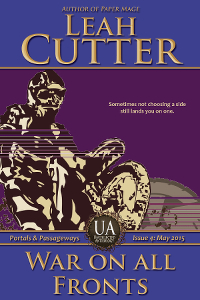 Tong Yi carries the mysterious message of Zhang Gua Loa back to his boss.

The immortal had said there would be war. But between whom? And why?

Huli Transport takes advantage of the situation to become the messenger service of choice in the war zone. They promise to remain neutral, and to deliver messages to all sides.

In the meantime, Tong Yi has battles of his own to fight, both with his older brother and his own growing understanding of magic.

But in the middle of a war, is it possible for him to remain neutral? Or has his side already been chosen for him?

This novella is a sequel to the story “Dancing with Tong Yi,” which appeared in Uncollected Anthology, Issue 1: Magical Motorcycles.

“Rites of Passage” by Annie Reed 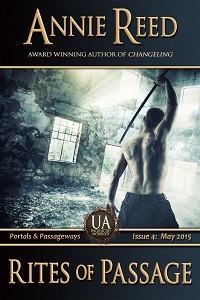 Finn guards this world from the monsters from the other side. Slays their servants before they can finish creating passageways into our world for their masters.

Important work. Lonely work. Work that killed Finn’s own master when he got careless after too many decades on the job.

And Finn’s been doing this work for a very, very long time. 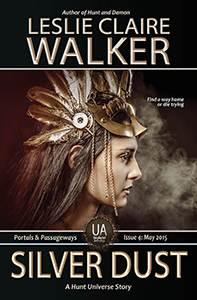 Silver had it all—eternal life, long-term memory, and a real sweet princess gig as the heir to the Faery King’s throne. But then the Faery realm caught a terrible disease, and she tried to save her people by taking the sickness into herself. She ended up banished with a price on her head and only days to live. The cure cost her memory and left her in hiding, a stranger to herself.

When her one friend in all the worlds disappears while trying to help her find a way home, Silver must come out of the shadows to save him. She must face the danger and the unknown lurking in the Human and Faery realms—and in her own strange heart and soul. 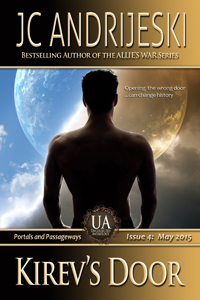 Kirev is a seer. Raised in an alternate version of our Earth, where his people are enslaved under human owners, Kirev joins a resistance army of rebel seers after spending most of his youth in work camps and brothels. He wants to help his people, but during his first mission with the seer rebels, Kirev faces a terrifying new future when a voice from his past intervenes and sends his life into a whole different direction.

~ A spinoff story from the ALLIE’S WAR series ~ 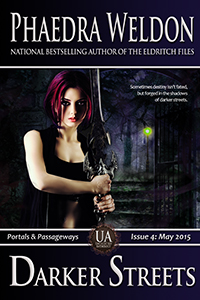 The Cavanaugh Family is known for banishing the last of the Twelve High Demons of Hell with the help of the magic sword, November.

Fifty years later, the most powerful of those Demons escapes its prison and kills the Demon Hunter who imprisoned her. The Demon’s next target—Taylor Cavanaugh, the latest and only Heir to November.

But Taylor doesn’t know how to swing a bat, much less a sword. Her family’s failure to educate her about any of its history could prove to be her undoing unless she proves herself the Heir and wields the sword before the Demon known as Abbadon destroys her. 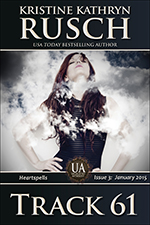 Kessa possesses only small magic. But her skills allow her to help those who wield bigger magic.

Her latest job takes her deep into the bowels of New York City’s subway system, hunting for bits of history long since forgotten.

And what she finds deep down in the dark will both threaten her life and change it forever. 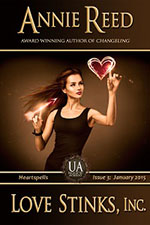 It seemed like a good idea at the time.

Dyte started her anti-Valentine’s Day business as a way to get even with her dad, none other than Cupid himself, after he scared away her boyfriend. She just never expected Love Stinks, Inc., to become quite so successful.

The last thing Dyte wants is the title Zeus plans to bestow on her: Goddess of the Chronically Single (her company’s profits were that good, and boy do the old gods have a thing about tithes and offerings).

With Love Stinks on the verge of a record-setting year, Dyte has two choices to avoid the dreaded title: admit her dad was right and she was wrong about the whole boyfriend thing (like that will ever happen), or find true love (without the benefit of spells or magical arrows) before the clock strikes midnight on February 14th. 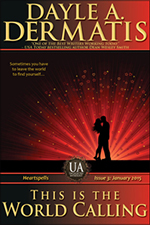 “This is the World Calling” by Dayle A. Dermatis

Tansy and Ki’s families are two of the most powerful witch dynasties—and the feud between them puts the Hatfield and McCoys to shame. So why, then, did their parents not care when the two would run off and play as children, lost in their own little world? When they meet again as adults, Tansy and Ki’s mutual attraction makes it vitally important that they find the answer to that question. 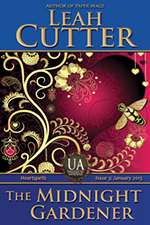 “The Midnight Gardener” by Leah Cutter

Joanie finally found her heart out in the backyard, hanging in an old fir like a Christmas ornament, covered in bees…

Now she must discover what it means to hold her heart open for another. 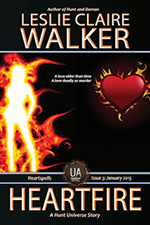 Someone kills a woman in the alley behind Snake Bite Tattoo—a clear declaration of war against its dangerous proprietor, Malek, the serpent from the Garden of Eden made an immortal man. If he can work a spell in time to bring the woman back to temporary life, she can tell him who murdered her and why. He’ll track them down and make they pay. End of story.

But he doesn’t count on remembering that he once knew her, or the feelings that rise in him along with the memories. Or that the reason for her death and the declaration of war are not what they seem. 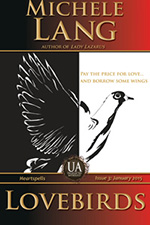 Nancy gave up on love a long time ago, and lives a well-researched, rational life in Buffalo, New York. But winter gives way to spring, and the voodoo love store downtown sells not just lovebirds, but the potential for a different kind of life. When she finds the courage to say yes, love swoops out of Nancy’s dreams on borrowed wings. 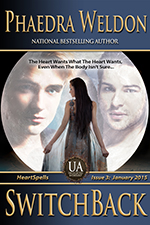 Frustrated with her feelings and the impossible situation she finds herself in, Skylar seeks out a local witch for advice. The witch gives her a spell, with a warning, that once the spell is sealed with true love, there is no going back.