The third book in my Retrieval Artist series is now available in e-format.  All of the Retrieval Artist novels do stand alone, so you can read them out of order, if you would like.  (I would recommend that you read them in order, but that’s just me.) The cover is again by the wonderful Jonathon Kort.  Here’s all the information on the book: 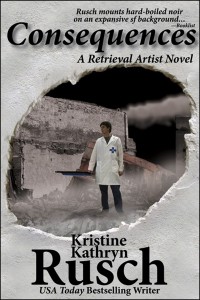 The trade paper version will appear later in the summer.  You can also get an audio version on Audible.com. The e-book editions are available on Kindle, Barnes & Noble, Smashwords, and in other e-bookstores.

And to whet your appetite, here’s the cover description:

A woman dies in the domed city of Armstrong on the Moon. Detective Noelle DeRicci discovers that the victim is a Disappeared—an outlaw in hiding wanted for crimes against an alien civilization. Only DeRicci’s old partner, Retrieval Artist Miles Flint brought the Disappeared home, something he would have only done if he believed the alien government would exonerate her for her crimes.

But Flint and DeRicci are no longer partners; in fact, they’re on opposite sides of the law. Flint can’t tell DeRicci about his client’s role in a war between humans and a mysterious alien race. The Disappeared’s death is only the first volley in an escalation of that war, a war that threatens to engulf the entire solar system.

“Here’s Rusch’s genius: She doesn’t confine herself to the rules of any one genre. She does world-creation and social criticism like the best sci-fi writers; she creates crime stories that would be Best Episodes on Law & Order or CSI; and she creates stories of human relationships that rank her with the finest character writers working today.”
—New York Times bestselling author
Orson Scott Card

Mixing interstellar politics and police procedural, Rusch turns out a satisfying SF mystery. Flint’s internal conflicts are deftly portrayed, and the gritty realism of the murder investigation meshes well with the alien setting. This [third] entry in the Retrieval Artist series should please SF and mystery fans alike, and can be read independently.
—RT Book Reviews