New Book! The Enemy Within

New Book! The Enemy Within

I do love this new publishing world. In the past month, I’ve had three major book releases. You know about the first two–Street Justice, the newest Kris Nelscott novel in years, and the Fiction River Special Edition, Crime, which I edited.

Add to those The Enemy Within. I’m so proud of this book. It started as a short story (“G-Men”) that got picked up by not one, but two year’s best volumes in not one, but two different genres (science fiction and mystery). The mystery pick-up, for The Best American Mysteries series, really pleased me because the series isn’t known for taking alternate history (which “G-Men” is) and because one of my own favorite writers chose the story (Jeffrey Deaver was the guest editor that year).

I had started the novel immediately upon finishing the story. The Enemy Within was a lot of fun to write. And yes, there will be more stories set in this universe–as soon as I finish with the Retrieval Artist mini-arc. (Expect information on that in a week or two.) If you want to know the history of both The Enemy Within and Street Justice, see this interview conducted by Kilian Melloy over at The Edge. 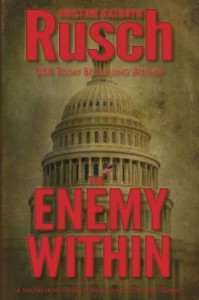 The Enemy Within is a perfect tax day release if you want to think about governmental what-ifs, or if you’re feeling a bit paranoid. Here’s the back cover information:

One of Kristine Kathryn Rusch’s most acclaimed short stories becomes one of her most original novels.

February, 1964: Two men die in a squalid alley in a bad neighborhood.  New York Homicide Detective Seamus O’Reilly receives the shock of his life when he looks at the men’s identification: J. Edgar Hoover, the famous, tyrannical director of the FBI, and his number one assistant, Clyde Tolson.

O’Reilly teams up with FBI agent Frank Bryce to solve the second high-level assassination in only three months. Because in November of the previous year, someone assassinated President John F. Kennedy. The cop and the FBI agent must determine if the same shadowy organization committed all three murders. To do so, they must act quickly before some of the nation’s most powerful men—from Kennedy’s brother, Attorney General Robert F. Kennedy, to the President of the United States, Lyndon Baines Johnson—do something rash to keep Hoover’s secrets from ever becoming public.

In our world, Hoover kept his secrets until long after his death. In Seamus O’Reilly’s world, Hoover’s secrets get him killed. The Enemy Within offers alternate history so plausible that only Kristine Kathryn Rusch could have written it.

And some reviewers have already weighed in:

RT Book Reviews calls it, “A dark, yet fascinating tale, The Enemy Within gives readers an intriguing look at what could have happened in 1964 New York.”

Keith West at Adventures Fantastic says, “[Enemy Within] is a blend of mystery, political thriller, and alternate history. It was a compelling read I had trouble putting down. … This is one fans of political thrillers won’t want to miss.”

And Dave Dickinson of Astroguyz says “Rusch weaves a convincing alternate history tale of ‘what ifs’ that interlaces with our own history of those troubled times. … Be sure to read Kristine Kathryn’s Rusch’s latest thriller The Enemy Within for non-stop political intrigue!”

You can order The Enemy Within from your favorite bookseller, or find it at  Amazon, or Barnes & Noble. You can get the ebook at any ebookstore, including Kobo, Amazon, and Barnes & Noble.

So, you’ve finished your taxes, and you have time on your hands. What are you waiting for? (Besides the Retrieval Artist or a new Diving book.)

14 responses to “New Book! The Enemy Within”