In the 1990s, I was known primarily as a fantasy writer, not an sf writer. When I became the editor of The Magazine of Fantasy & Science Fiction, the old editor (who was still the publisher) edited my fiction–accepting or rejecting what I had written, with the caveat that I send my stories to F&SF first. Then I left the magazine, and the editor who replaced me let me know in no uncertain terms that my fiction was no longer welcome there. My fantasy short fiction output declined to the occasional fantasy story in Asimov’s, and a handful of stories in invite-only anthologies. For a while, Shawna McCarthy gave my fantasy fiction a home in Realms of Fantasy, and some of my fantasy stories appeared in literary journals. Mostly, though, my fantasy short story production dropped off (or migrated to my Kristine Grayson pen name). Once Lightspeed started, I placed some fantasy stories there, but I had gotten out of the habit of writing them without an invite to do so.

This past year, I’ve written a lot of fantasy fiction due to our own Fiction River, and several more invite-only anthologies. The stories have appeared irregularly with more coming out in the next few months. I had forgotten how much fun I had writing fantasy, particularly urban fantasy–which, when I quit writing it regularly, was called contemporary fantasy. 🙂 Times change, labels change, but fantasy doesn’t. 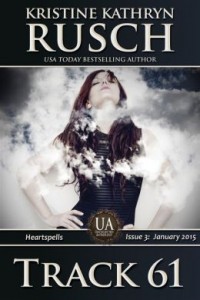 The six women involved in the lovely online experiment, The Uncollected Anthology, invited me to contribute as a guest author. The theme is Heartspells. I started several stories, but they didn’t suit because this particular Uncollected Anthology required a touch of romance. I have some great story starts that are clearly not romantic, and soon they’ll be story finishes.  I finally settled on a story about a woman in the most urban setting I could think of–Manhattan. Only she’s beneath Manhattan, in the subway tunnels.

Yes, I have a thing for the subway, as you can probably tell by this week’s Free Fiction story, “Commute.” Maybe because the subways are in tunnels. I’ve written more than one story about events taking place underground (and one sf novel–City of Ruins). I’m sure there’ll be more.

I’m honored to be the first guest author in the Uncollected Anthology series. The six writers who’ve designed the anthology are among the best working today. They are Leah Cutter, Dayle A. Dermatis, Michele Lang, Annie Reed, Leslie Claire Walker, and Phaedra Weldon.   If you read Fiction River, you’ve encountered their work–not just in some of the volumes I’ve edited, but in the volumes edited by the guest editors as well. Bestselling, award-winning writers all, they make the Uncollected Anthology one of my regular reads. I hope your visit over to their website encourages you to become part of their experiment. Because I think The Uncollected Anthology is here to stay.