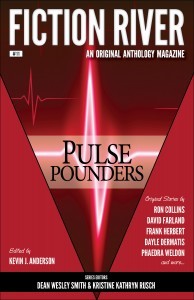 Today marks the release of an amazing Fiction River volume, Pulse Pounders, edited by Kevin J. Anderson. In addition to his own bestselling novels, Kevin also collaborates with Brian Herbert on the New York Times bestselling Dune series. If Kevin hadn’t done all of that, his career as an editor would have made his name in the field. Three anthologies he edited became the bestselling science fiction anthologies of all time. He’s also edited horror anthologies, two holiday anthologies for WordFire Press, and a whole bunch of other projects in-between.

When Kevin pitched Pulse Pounders, he said he only wanted thrilling short fiction stories. He didn’t care what genre they were in. He considers thriller to be its own genre. (I happen to agree.) So this marvelous, heart-pounding anthology has stories that run the gamut from science fiction to contemporary, horror to fantasy. The authors include the great Frank Herbert (with a never-before-published story), David Farland, Phaedra Weldon, Kevin himself (in collaboration with Peter J. Wacks), and me. 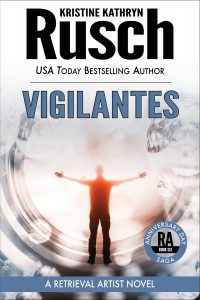 My story, for you Retrieval Artist fans, is the first version of the opening chapters of Starbase Human, which you won’t see until May. Sometimes I tell myself stories to figure out a plot point. I had done so with “Sole Survivor.” It stands alone, or Kevin wouldn’t have bought it because he hasn’t read the Retrieval Artist (yet, right, Kev?). 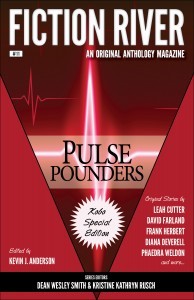 Speaking of the Retrieval Artist, the April book, Vigilantes, is now up for preorder in ebook on iBooks, Kobo, and Amazon. You can preorder the remaining books in the Anniversary Day Saga in audio. And no, there’s no way to preorder the paper books. You’ll have to wait until the release date for that.

And for those of you who missed it, the monthly releases in the Saga are underway with last week’s publication of A Murder of Clones.

One more thing about Pulse Pounders. If you plan to get the ebook edition, let me recommend the special Kobo edition. It has three additional (quite wonderful) stories by well-known legal thriller writer Diana Deverell, Fiction River favorite Leah Cutter, and newcomer Kim May. You don’t want to miss those, and Kobo is the only place to get them.

Lots of reading. I hope you enjoy it all!