I am pleased to announce that Protectors hit print today. Not only did it hit print, it hit print in a variety of formats. You can get an eboo 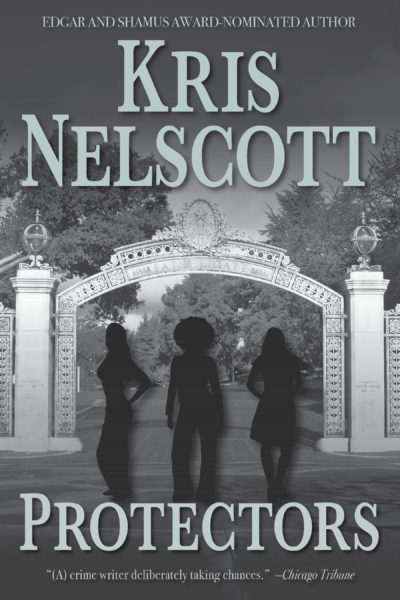 k, a trade paper edition, a hardcover, or a limited edition of the novel.

The hardcover is pretty, but the limited—oh, my. The limited is stunning. Allyson Longuiera at WMG Publishing did a spectacular job. The limited edition, which is signed, has interior artwork from acclaimed photographer Nacio Jan Brown. The edition also contains three short stories. You can read “Blaming the Arsonist” for free on this website right now, but the story will go down on Monday. That day, I’ll put up the second story, “Combat Medic.” However, the third story will be available only in the limited edition, because that story, “Special Delivery,” has some spoilers about the villain of the novel. I also wrote an introduction to the limited edition as well.

The signed edition is limited to 250 copies, so once they’re gone, they’re gone. For more information, click here.

So…what’s Protectors about? I like to say it’s the story of three strong women who protect their world, one person at a time. Here’s the novel’s back cover copy:

A former combat nurse, a former legal secretary, and the owner of one of the first women-only gyms form an unlikely alliance in this fast-paced and riveting new work by the acclaimed historical mystery novelist Kris Nelscott.

The novel opens on the day of the Moon landing, July 20, 1969, two years after the Summer of Love changed Berkeley forever, and left lots of broken teenagers in its wake.

One of the first (if not the first) women-only gyms in the nation and the start of the Women’s Self-Defense Movement bring June “Eagle” Eagleton, Valentina “Val” Wilson, and Pamela “Pammy” Griffin together.

They never intended to face the kidnappings and murders of college students. But no one else paid attention.

An amazing trip into the experiences and lives of 1969 Berkeley told with riveting attention to detail. A read that will keep you turning pages into the late night and shock you at the same time.