I finished my first piece to recommend on January 3. Usually it takes me a week or more. So the start of the month pleased me greatly and bodes well for the rest of the year.

However, as the month progressed, I got little traditional reading done (as opposed to reading for workshops or editing projects). I read the remaining anthologies for the series workshop at the end of the month and found that, while what I read was entertaining and, in one case, educational, nothing was worth recommending to you folks.

I read a lot of good fiction in manuscript, but again, that doesn’t help you all. Also, I went over the big diving novel, which took about five days longer than going over a novel usually does for me. (I also cut 200 pages!) That ate up more than a week of my reading time as well.

The month really did zoom by for me. I can’t remember a January that has ever gone this fast. Part of it was CES and the series workshop, but much of it, I think, was the sunshine and my energy levels. I got a lot done.

So the January list is spare, but I think you’ll enjoy it.

Here’s what I liked In January. 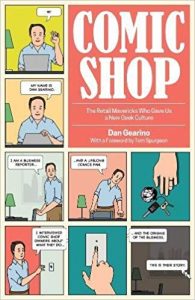 Gearino, David, Comic Shop: The Retail Mavericks Who Gave Us A New Geek Culture, Swallow, 2017. I can’t remember exactly where I heard of this book, but I’m glad I found it. This book traces the history of the comic book store as a separate entity here in the United States. It examines the practices and foibles of comic retailers from the start of the stores in the 1960s through 2017. I know a lot of the players here, but I didn’t know a lot of the history at least in-depth. I mean, I remember when Capitol City Comics started. I remember hearing that Diamond was evil, and I knew about the comics glut of the 1990s. But I did not know why everyone was saying Diamond was evil, or what really happened behind the comics glut. So that was fun for me.

Even better is the examination of how retail stores work and thrive, particularly specialty shops. How it takes certain visionaries to start something and some strong souls to keep that something active.

If you’re an indie writer, you’ll want to read this so you’ll understand retail better than you probably do. And an added bonus is that the book is very well written, although the publisher wasn’t the best. There’s a page description of a photo, referencing the photo, and the photo isn’t in the book. (I hope someone has repaired it in the ebook.) I found a number of mistakes like that, although no others quite as glaring. I’d point you to the ebook, but it’s ridiculously expensive. So pick up the copy in whatever form you prefer and enjoy! 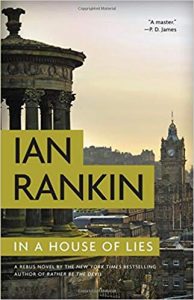 Rankin, Ian, In A House of Lies, Little, Brown and Company, 2018. Weirdly, it took half a month for me to read this novel. I could only read it in bits and snatches of time, due to all my other commitments. And yet, the novel remained vivid in my mind the entire time, and I worried about it at odd times. A cold case implicates Rankin’s retired hero Rebus, and Siobhan Clarke worries about a case she thinks she might have solved too quickly. Bring in Cafferty and some other familiar characters, plus a great rumination on the differences between generations, and it creates one of the stronger Rankin novels in a while.

Sedaris, David, “Father Time,” The New Yorker, January 7, 2019. Full confession: I did not read this in the issue. Instead, my Pocket Reader recommended the piece and rather than do actual work, I clicked on over and read it.

I love Dave Sedaris’s essays, and this is no exception, even though it is—at it’s heart—very sad. Sedaris’s father went into a nursing home recently, and Sedaris focuses part of his essay on that. The rest—well, it includes turtles and children and Nintendo, but in the ways of Sedaris, all that makes sense.  Read and enjoy.