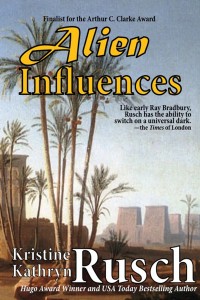 WMG Publishing has released an ebook edition of my Arthur C. Clarke nominated novel, Alien Influences.  While the novel got great treatment in the U.K., it got published “dead” in the United States.  I had already lost two editors at the company and no one supervised the release.  While the novel received almost no attention in the U.S. science fiction press, The New York Times called it “a well-conceived, well-executed novel.”  You can order the e-book from Barnes & Noble, Kindle, Smashwords, and on other ebook sites.  The trade paper edition will appear later in the spring, and I’ll make the announcement here.  Oh, and if you’d like to read an excerpt, click here.