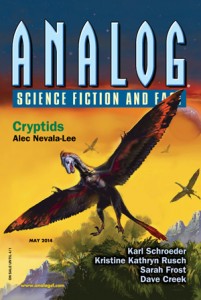 I always tell my writing students they should never ever pre-edit for an editor. Which means that the writer should let the editor decide what goes in his magazine. I’d like to say I take my own advice, but if it weren’t for Dean, I wouldn’t have a story in Analog this month. I wrote “Snapshots” while working on the upcoming Smokey Dalton novel, and figured no one in the sf field would take the story. I make great excuses about not mailing things–all writers do–and I’m not going to share those with you. But suffice to say, it was Dean who told me to give Trevor Quachri, Analog‘s new editor, a try. Trevor picked up “Snapshots” without hesitation, proving that he, not I, edit Analog. Editors often want to buy certain kinds of stories, but no one ever sends them those stories. So take this one as an example, even from an old-timer like me, and send your fiction to a likely market, not a market you know will buy it.

I’m really proud of “Snapshots,” and very glad that Trevor wanted the story for his magazine. I hope you’ll take a look at the story–and the magazine–as well. I personally can’t wait to dip into the stories by Alec Navala-Lee and Sarah Frost. 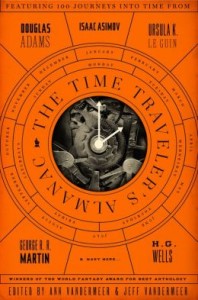 Another Analog surprise for me a few years ago occurred when Stanley Schmidt was still editing. He bought my time travel story, “Red Letter Day,” which went on to win the AnLab Award for the best short story published in that magazine in 2010. Ann and Jeff Vandermeer have reprinted the story in their massive Time Traveler’s Almanac. The book came out in England last fall, but it’ll be out in the States next Tuesday. You can preorder your copy in hardcover, trade paper or ebook right now.

And finally, I know many of you who come to this website regularly do not read the Business Blog. So, let me tell you folks about the bundle that Kevin J. Anderson asked me into. (You biz blog folks already saw this.) The bundle includes books from Neil Gaiman, Brandon Sanderson, Tracy Hickman, David Farland, Peter David, James A. Owen Peter J. Wacks & Mark Ryan–and me. If you haven’t read my Fey series, use this bundle to taste-test the books. I included The Sacrifice, which is the first book of the Fey. The bundle has two nifty features (besides the authors). First, you can set your own price (as long as you pay the minimum of $3). That’s right. You can pay as little as $3 for six books, as little as $12 for nine. Plus a percentage of the money goes to a charity we writers hold dear, the Challenger Center. So you get at least six books and donate to a charity at the same time. Great deal, eh?

Whether you like short fiction or fat fantasy novels, you have a lot of choice here. A big honking time travel anthology, an excellent issue of a great old magazine, or a pile of novels by writers whose work you’ve heard of and maybe never tried. What’s not to love? 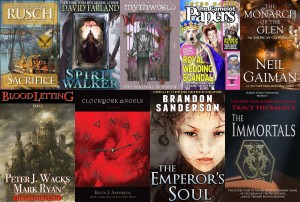 5 responses to “Time Travel, Science Fiction, and Lots of Fantasy!”