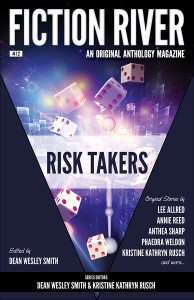 I had such hopes for March. We held the anthology workshop during the first week, so all of my reading that week was review. Afterwards, I had to line edit two volumes of Fiction River, so that took some of my reading time. (If you want to see all the reading I do on Fiction River, take a look at Fiction River: Risk Takers, which I line edited several months ago, and read for 2014’s anthology workshop. There are some marvelous stories in that issue. I think it’s really strong.) But I expected to get a lot of leisure reading done as well.

Oh, well. Best laid plans, and all that.

I ended up with a Martian Death Cold, not as bad as Dean’s, which leveled him, but bad enough. I ended up taking on a lot of his chores and stuff, as well as moping around with a world-class honking (and I mean honking) cold. Normally, that makes for good reading time, but not this time. By the time I got chores and writing and exercise and business and cooking and caretaking done, I had no brain. So I caught up on television mostly.

I did get some reading done, much of it fairly mediocre stuff. (I just reviewed it to see if I was just too critical. Nope. Mediocre stuff.)

I’ve listed the really good stuff I read in March below.

Jacobs, Laura, “Balanchine’s Christmas Miracle,” Vanity Fair, January 2015. Fascinating history of The Nutcracker as performed by The New York City Ballet. Every year, people come from all over the world to see what is still a George Balanchine production, danced by dancers who are generations removed from him.

This piece discusses where his vision came from, how it changed ballet in the United States, and how the show gets staged each year. Worth reading, even if you’re not a big ballet fan. 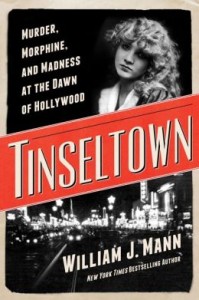 LePore, Jill, “The Great Paper Caper,” The New Yorker, December 1, 2014. Absolutely fascinating article about the release of any Supreme Court justice’s papers, and how the information must be or can be limited (especially if some cases are still being decided).

LePore hangs all of this on the still-unsolved theft of Justice Felix Frankfurter’s papers in 1972. Someone smuggled more than 1,000 papers from his files from the Reading Room at the Library of Congress. A few people believe they know who did it and why, but the case got dropped for a variety of reasons (not the least of which were focus and manpower. Apparently {she writes snidely}, a lot was happening in 1972).

I found this both interesting and shocking, and it presented issues I hadn’t thought of before. Excellent reading, in an area that I would like to know more about.

Mann, William J., Tinseltown: Murder, Morphine, and Madness At the Dawn of Hollywood, HarperCollins, 2014. First, let me say that I hate the subtitle of this book. I hated it when I bought it; hate it worse now that I’m done reading. The book isn’t about morphine or madness. It’s about one of Hollywood’s most famous murder cases: the death of William Desmond Taylor.

Taylor died in his home in 1922, and the suspects included starlets and gangsters. To this day, the murder’s never been solved, although Mann has searched through records that no one seems to have seen and has come up with a plausible theory of the case.

The book is less interesting for the true crime aspect, though, and better at the broader picture of the time. What Hollywood was like in the early 1920s, how the nation viewed it, and how the moguls dealt with Hollywood from faraway New York (then the center of entertainment). 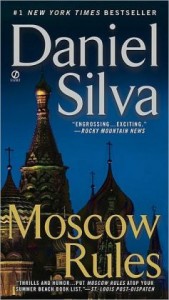 Mann also puts the book into the context of other scandals, including the Fatty Arbuckle case which had an impact on this one, and several smaller cases, big at the time and now forgotten.

If you want to see how much things have changed—or how they haven’t—pick up this book.

Silva, Daniel, Moscow Rules, Signet, 2008. With this book, Silva turns his attention from the Middle East to modern Russia, which puts his hero Gabriel Allon at a disadvantage. He’s not an expert on Russia, although, in the manner of spy novels, he finds himself embroiled in a case that doesn’t involve some of his strengths, although others come to the fore. There’s an awful lot about art and art history here, which does put Allon in the center of things.

The plot is very twisty, with excellent side characters (not just Allon) and quite powerful because of it. I also used the opening chapter as a teaching tool in the anthology workshop for setting and voice when the character is something larger than a single person. (For the most part, the character in the opening is the town of Courchevel, France.) Masterful use of setting, character, and viewpoint—almost a master class in and of itself.

So read Moscow Rules. I’m not sure if it’s the one to start with, but it wouldn’t hurt. 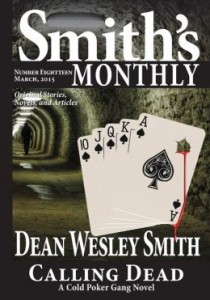 Smith, Dean Wesley, Calling Dead, Smith’s Monthly, March, 2015. Due to all the distractions in February, Dean finished this book later than he had planned. I read it in March, and oh, my. Dean had asked me to read it fast, which to me meant I should read it in two lumps—one the first night, and one the second. Instead, I blew through the book and stayed up way too late doing so.

Calling Dead is a Cold Poker Gang novel. It starts with a grim discovery that Lott and his partner Andor make in a cave outside of Las Vegas in the year 2000. Fast forward 15 years, and it becomes clear they hadn’t solved the crime. In fact, in the meantime, things have gotten a lot worse.

Very twisty, and very dark, but not too graphic, which I appreciate. This book is impossible to put down. Once you start, you will finish in the same sitting. I promise.