I spent much of the month working on the Holiday Spectacular. You can get last year’s Spectacular in a single ebook volume this month (July), because…Christmas in July! Seriously, you’ll enjoy it. The stories are wonderful. And so are the stories for 2020. I can’t wait to share them with you. A Kickstarter for the Spectacular will start in November, but you can subscribe early. I don’t have the link as I type this, but it’s in Holiday Spectacular #1.

The first book of the month was a huge disappointment. It features two of my favorite characters, and one character I don’t like (a woman who had to be rescued…again…even though the reviewers claim she’s strong. Yeah, right). I thought maybe it would be okay, given the two characters I like, but naw. The writer seems to be bored with his choice of material, which made me bored. I finished, because he’s a good writer, but I ended up hate-reading at the end. Sigh.

The second book of the month was by a favorite author, and damn, that book was as boring as she gets. Meaning she kept me reading, but slower and slower with each passing attempt. Took me a while to realize the suspense…wasn’t suspenseful, and I knew what was going to happen with the characters. I finished it, but it’s not worth recommending. And then there was the novella by another favorite author, that didn’t end. It was just padded with material from an upcoming novel.

No, I wasn’t being excessively critical. I read a lot, just didn’t find much that really excited me, except the three things listed below. I loved those books (and that single article). I mean, passionately loved them. 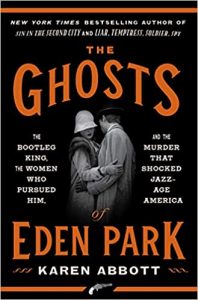 Abbott, Karen, The Ghosts of Eden Park, Crown, 2019. I loved this book. I waited over a year to read it because I wasn’t sure I would like this book. But I loved it. Historical true crime, involving a famous bootlegger, the son of the former president (and current Chief Justice of the Supreme Court), and one of the most impressive women I’d never heard of, although I had seen her name in passing before.

The subtitle of this book is terrible, and from the afterward, it’s clear the publisher slapped on the subtitle. “The women who pursued him…?” Seriously. No woman pursued this bootlegger the way that the cover implies. Instead, a very impressive woman, an assistant U.S. Attorney General in 1926 (!), went after him repeatedly for breaking the law.

The book starts with bootlegger George Remus murdering his wife in cold blood, in Eden Park. The book then uses historical documents to lead us to the murder and trial, and the results, some of which surprised me.

Karen Abbott is a heck of a writer, and she uses the historical record to supply the needed details to make this book read like fiction. It does, and parts would be impossible to believe if they were, indeed, actual fiction. Read this one for the Assistant Attorney General…and the history… and the, well. Wow. Who knew? I mean, seriously. The stuff we lose to history amazes me every single time. 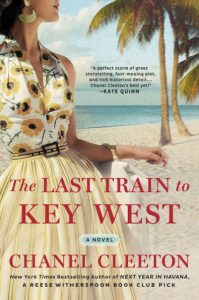 Cleeton, Chanel, The Last Train to Key West, Berkeley, 2020. I loved this book. I ordered it sight unseen because I had liked Cleeton’s previous Cuba books. This isn’t Cuba; it’s Florida, and it isn’t really about the family that her most recent books have focused on. I didn’t realize that the book is about the 1935 Hurricane, thought to be the most devastating to hit the U.S. (There’s no way to know, because we didn’t have the equipment to measure hurricanes in the 1930s.)

She surprised me more than once with her plotting. The scenes of devastation after the hurricane were a tad too tasteful for me, but probably appropriate to the genre she’s writing in. (I tend to go full noir when history demands it.)

I blew through this book, pun intended. I highly recommend it.

Held, Anna, “The First Shoe I Really Loved,” Runner’s World, Issue 2, 2020. When Runner’s World started this series on shoes, I thought it was puffery. Instead, it has resulted in a number of good and thoughtful essays. Most of them are about running, of course, but also about life. (Runners would say of course.)

Anna Held’s piece is about loneliness, running, and writing. Her realizations as a writer came after she learned something about running. Worth reading for runners and writers out there.