Nearly missed getting this up in May. What a busy spring. Unexpectedly busy.

I did a lot of reading in April, even though it doesn’t look like it from the list below. Much of my reading was for the Fantasy workshop. Those writers did an amazing job. Unfortunately, I was not editing an anthology around this particular workshop, so I couldn’t pick up any of that great work. When it’s published—and I’m sure it will be—I hope the authors will contact me, so I can put their stories in this recommended reading list. 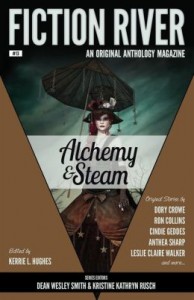 However, some of the reading I had done back in January/February of 2014 has just appeared in Fiction River: Alchemy & Steam. I didn’t edit this one; Kerrie L. Hughes did. The anthology’s spectacular, doubly so for you steampunk fans. Pick it up!

April was also the month where I considered giving up my New Yorker subscription after 25 years. I read a pile of issues (remember, my own reading is about 2 months late—and then you see it a month after that), and found little in them. That improved in May, so I’m happier, and my subscription remains intact. But I don’t have as many articles as usual to recommend.

In addition to the manuscript reading, I read one anthology that didn’t excite me, and a few novels that were rather meh. I’ve read some good work as well, though, and that’s listed below. 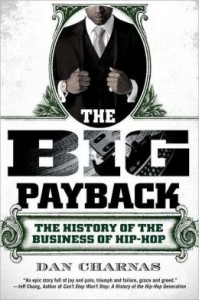 Charnas, Dan, The Big Payback: The History of the Business of Hip-Hop, New American Library, 2010. This book is absolutely fascinating. Hip-hop started small, rather like indie publishing, and became a multi-billion dollar industry. It changed the way that everything is marketed from shoes to cologne to music to movies. Street teams, product placement, underground marketing, all changed due to hip-hop.

I marked page after page after page in this book, lots of underlining, lots of comments in the margin. I need time to think about it, because I see hundreds of parallels to publishing—where it was, where it is, and where it’s going. I also see how some of the marketing techniques can be used in indie publishing.

I had initially planned on sharing all of that as I discussed the book, but looking at it as I write, I realize there’s too much here. I need to review and cogitate. So I will.

In the meantime, buy and read this one. Not just because I see publishing parallels, but because it’s truly fascinating. I knew a lot about rap and hip-hop, more than I thought I did. And I hadn’t realized some of the influences it has had on the way things are now. My only complaint? The publisher decided to put the end notes online. I hate that, even if I do understand why they did it. (The book is 805 pages without the end notes.) I have no idea if the ebook has end notes. If it does, then get that edition. But pick up the book. You’ll learn a lot, and enjoy yourself as well. 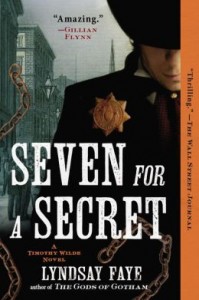 Faye, Lyndsay, Seven For A Secret, Amy Einhorn Books, 2013. The first novel in Faye’s series featuring Timothy Wilde, The Gods of Gotham, was nominated for an Edgar and greatly deserved the nomination. (It also had the world’s worst cover, which I noted the first time I recommended that book.)

Often, the sophomore effort of any writer in a series is worse than the original book. Seven For A Secret is as good, if not better.

Set in 1846 New York, Seven For A Secret starts when a beautiful woman shows up at Wilde’s apartment (does this sound like a cliché or what?) and announces that her family has been kidnapped. What makes this classic detective opening work is the time period and the woman. Lucy Adams is a free black, and her family was kidnapped by slavers who mean to sell them as slaves in the South.

The book rockets forward from there. Included are an entire society of free blacks who work as a kind of police force, a mute six-year-old chimney sweep, some corrupt politicians, and a horrid snowstorm that really did kill hundreds of people.

If you like historical fiction, read this book. If you love a good historical mystery novel, like I do, then you’ll be in reader heaven. I just preordered the next book in the series, and I hope to hell that the publisher (Putnam) continues to publish these marvelous books, even though Amy Einhorn left Putnam shortly after this book came out.

Gregory, Alice, “R U There?” The New Yorker, February 9, 2015. I’m writing a series of stories and books set in a rape crisis center in the early 1970s, when those were just starting up. I once worked at a suicide hotline. You’d think I would keep abreast of help lines and help systems. But I haven’t been.

A new one has cropped up in this century called Crisis Text Line, which allows people in trouble to text rather than call. In many ways this is safer because the texter doesn’t have to speak aloud and can actually text from wherever they are, rather than wait to get somewhere safe to talk. Fascinating stuff, and worth reading about.