I spent a delightful week of the month reading stories for the Mystery Workshop that I conducted here on the Oregon Coast. The writers were truly spectacular and even the stories that missed some details were wonderful to read. I could envision them in any of the mystery markets. I can’t point out the stories to you at the moment, but will if I see them when they’re published.

That did slow down my leisure reading more than usual. Often, when I’m doing an in-person workshop, I continue my leisure reading. But these writers were so good they managed to satisfy that jones I have for unusual stories well told.

Still, I managed to read a bit of nonfiction and some fiction.

Plus I had a few other adventures.

I read a literary thriller by a writer whose previous three books I liked. This one…not thrilling, very literary. Everyone (everyone) was stupid. Including our POV character. Sigh. I got to what I thought was 10 pages from the end, turned the page…and found nothing. No more story. I realized then that she had ended on a Lady or the Tiger kind of ending. I got to pick which I believed. To say I’m mad about it is an understatement. I loathed that ending, and feel cheated reading the book. Apparently this is the first book in a planned series. Wrong way to end a series book. Big time. This is probably the last time I’ll preorder one of her novels. Maybe I’ll read the next one. After the reviews come in. Wow. She was going downhill as a writer (believing the hype, I think), but this…was awful.

Then, in mid-September, I canceled my subscription to Vanity Fair. I love that magazine, but I never remember to read the digital editions. That wouldn’t be a problem, if I continued to get the paper versions. However, I simply can’t. For the past two years, I was on their perfume-free edition subscriber list. Then, this summer, they kept sending me perfumed editions.

If I were a normal (but fussy) person, that wouldn’t be an issue. The problem is that I’m very, very, very, allergic to perfume. Every time I complained, they told me they put me on their perfume free list. (Sigh.) And then they’d send me a replacement issue—filled with perfume. Finally, someone in customer service said all replacement issues have perfume. I again told them to put me on the perfume-free list.

The issue arrived on 9/15, and Dean unwrapped it. The damn issue had perfume. Again. I threw out my sixth issue of Vanity Fair this year, then went to my computer and canceled my subscription. So you won’t be seeing any recommendations from that magazine any more. I’m bummed. I have subscribed for 25 years. Perfumes have gotten more toxic over time, and just removing them from the issue no longer works for me. I have to have the perfume-free edition or nothing.

Ah, well. The week before, Vanity Fair announced that their long-time editor, Graydon Carter, would no longer be with the magazine. I’d weathered editor shifts with the magazine before, and figured I would weather that one. I can’t, though, and stay out of the hospital. Just the little bit of perfume in the air after Dean opened the issue sent me to bed with a serious migraine.

No other magazine I subscribe to has the problems Vanity Fair does with its subscription service. Ah, well. The magazine was getting thinner, fewer ads, less revenue, and less fun. I’ll pretend that I won’t miss it.

I am enjoying Esquire under its new editor, which is a bit of a surprise. Esquire has no trouble sending me perfume-free issues. (Hear that, Vanity Fair?) And I am enjoying other magazines as well.

Here’s the best of the best for September, not counting the manuscripts I read.

Garner, Dwight, “Collective Might,” Esquire, June/July 2017. Garner writes about collecting books and music in the age of streaming. Like me, he obsessively collected music to listen to. I had hundreds of vinyl albums (which I regret selling now), still have hundreds of CDs, and have a large collection of music that I’ve licensed through iTunes. I’ve had Spotify for years, but only recently started listening on my runs. And dang it, I think about Garner’s words every time I hesitate over a playlist. He remarked that Spotify’s curated recommendations regularly get close to what he wants. And yeah, I’m stunned. The other day, Spotify sent me a humorous pro-Chicago Cubs song. Humor I get. I listen to a lot of funny songs. But the Cubs?? Baseball? Where did Spotify get that? And should I be scared?

Anyway, Garner writes that he moves the cuts he likes from the curated list to his own lists. (Guilty as charged.) Then he writes, “I like to imagine these lists are compiled not by computers but by the character in Charles Portis’s great novel, Norwood, who commented, ‘Listen, here’s what I’d like to do: I’d like to live in a trailer and play records all night.'” And heh! A Charles Portis novel I haven’t read. Time to get on that.

This essay is for the obsessives among us. Enjoy! 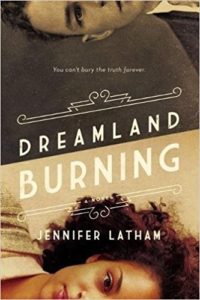 Grant, Adam, “Jimmy Iovine Wants To Learn,” Esquire, June/July 2017. Grant’s interview with Jimmy Iovine the founder of Interscope Records was timed to appear at the same time as the HBO documentary on Iovine and Dr. Dre, The Defiant Ones. (Fascinating that they didn’t talk to Dr. Dre too. Hmmm) Good interview about someone who has worked in the entertainment industry for a long time and is still in love with what he does. It’s short, but worth your time.

Latham, Jennifer, Dreamland Burning, Little, Brown Books for Young Readers, 2017. For the first time in a long time I haven’t been able to shake a book after I read it. I even dreamed about it, even though I finished reading it long before bedtime. When workers discover a body while remodeling a building on Rowan Chase’s family’s property in Tulsa, Rowan can’t let it go. She investigates herself with her friend James. We’re also following the story of Will Tillman in 1921, just before a major — race riot? massacre?–there’s no good term for what happened in Tulsa that year. Anyway, we meet the charming Ruby and her brother Joseph, and throughout the book, we worry: is the body Joseph’s? Will’s? Ruby’s? 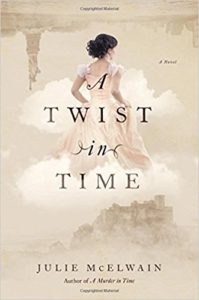 Plus, lots of scary things happen in 2017, not tied to the body, but to the fact that Rowen, the daughter of a African-American attorney and a white rich man, lives in a bubble. She ventures out of her bubble for a summer job, and sees the real world for the first time. Spectacular stuff. The ending is a bit rushed—or maybe I’m just feeling that way because I didn’t want the book to end. Read this one. It’s great.

McElwain, Julie, A Twist in Time, Pegasus Crime, 2017. This is the second book in McElwain’s series starring Kendra Donovan. The series is set in Regency England (mostly) because Kendra accidentally time traveled there in the first book. (See last month’s list.) Sometimes second books by a new author are truly inferior to the first. Technically, this one’s better. It’s more unified; it doesn’t have hanging threads; it seems complete. The mystery itself is tangled, but is closer to a standard one-off mystery than the first book. I also figured out whodunnit pretty early into the book, although that might’ve been me. 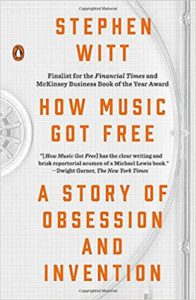 The details are great, the things Kendra fights against are fascinating, and I’m definitely on board for book 3. Since she’s traditionally published, I have no idea if there will be a book three.

If you’re going to start the series, start with the first book and slog through the opening. This is a great follow-up, but not the best introduction to the series.

Witt, Stephen, How Music Got Free: A Story of Obession and Invention, Penguin Books, 2015. Wow. Fascinating stuff. This books looks at the invention of the mp3, the rise of the internet, the rise of music piracy, the way that music studios work, and more. The book is well written, and I didn’t want it to end. I will be using some of what I learned here for my blog. Great stuff.