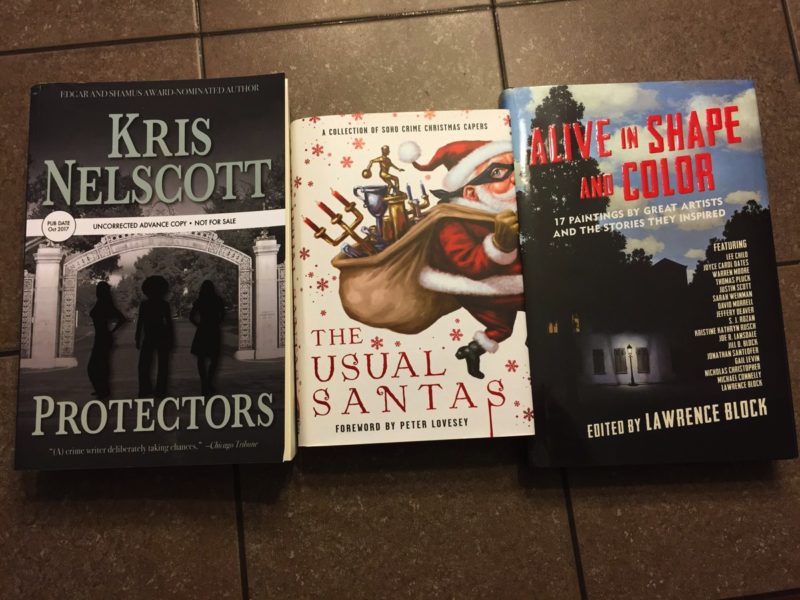 I got really weird about a book recently. Dean and I stopped at the mail on the way out of town for a day off. On our days off, I often go to Starbucks and read a paper book. Why not read on my Kindle or iPad? Because my days off are no-screen days. Otherwise, I’ll obsessively check my email or text some friends or read the articles I’ve saved on my Pocket reader app.

I find that my stress levels go up when I do those things. My stress levels go down when I’m away from all distractions, sitting in a coffee shop people watching, drinking a super huge cup of tea, and reading. One day away from home, reading and listening to the problems of people who are getting their daily ration of caffeine and sugar, makes me feel a lot better about everything.

So…in the mail, I got a book package from Amazon. In it, were two holiday books, one a novella, the other a hardcover called The Usual Santas from Soho Press.

That book is gorgeous. It’s a tiny hardcover, with a lovely cover and the funniest back cover blurb I’ve read in a long time. The endpapers are a police line-up (Christmasy) of some of the authors. The interior is beautifully designed, with consistent artwork, some great dingbats and chapter heads, and a lot of other really fun stuff.

When I initially saw that the book had arrived, I was going to bring it to Starbucks with me. Then I saw how lovely the book was and put it in the backseat, protected, so I couldn’t damage it. I took the novella and the romance novel I’d been planning to read with me for my day off.

Dean laughed at me, because The Usual Santas is not collectible. It’s just pretty. But I love that feature of the book and I didn’t want to mess up the pretty.

You see, I adore beautiful books. I buy too many of them just because they’re pretty. I’m always delighted when I read them too. I just started reading a history of the Broadway musical this morning and was pleased to see that it’s beautifully designed as well.

Last year, I was lucky enough to be included in In Sunlight and In Shadow, edited by Lawrence Block. That beautiful book was designed by Pegasus Press, and they spent some serious money on the edition. It’s all stories based on the art of Edward Hopper. My Kris Nelscott story sits side by side with stories by Joyce Carol Oates, Stephen King, Michael Connelly, and Lawrence Block himself. (In fact, Larry’s story won the Edgar this year.) Each story is accompanied by a reproduction of the artwork that inspired the piece.

Larry’s edited another volume, this year’s Alive in Shape and Color, based on artwork we writers got to choose ourselves. That volume is also beautiful. I just got my copy a few weeks ago, and am reluctant to read it because I’m afraid I’ll hurt the book.

I will read that one—and the first one—on my iPad so I can see the lovely design, but so that my peanut-butter-stained fingers won’t ruin the pages. (I was hoping for a mass market paperback reprint edition this year, but no such luck, and I can’t bring myself to order another paper copy and ruin it.)

WMG Publishing has just entered the beautiful book space as well, with a limited edition of my novel Protectors. The limited, which only exists in 250 copies, has bonus written material (an introduction and three short stories, including one unpublished story), and photographs by well known photographer Nacio Jan Brown.

The novel is set in Berkeley in 1969, and Nacio was in Berkeley at that time, chronicling the entire scene with his camera. I love his photos, and think they really enhance the book. But I also own a very battered copy of his photography book from that period, Rag Theater, and I got inspired by it. So including his photos makes the limited feel very personal for me.

That book came out during our Business Master Class. It was fun to hold them, and sign them when they arrived. I had known the books would be beautiful; I just hadn’t expected them to be that beautiful.

Also, during that class, Joanna Penn and I were having a discussion about the types of editions that books should have.

She had a realization in the middle of the workshop. She felt (and she’s right) that writers often get blinded by their own tastes when they produce books. She had neglected her paper books until last year’s master class, and now she’s jumped in full bore, but she’s much more ebook-centric than many folks at the workshop because of her lifestyle and reading choices.

We discussed our reading differences and preferences. Some of them were due to how we read, but some were due to our different cultures. Great Britain doesn’t have a history of mass market paperbacks, although they exist (because I’ve bought several, particularly of Ian Rankin’s hard-to-find novels in the days before Amazon took over the world).

In the States, mass market paperbacks ruled for decades. Mass market was and is my preferred method of reading novels. (I don’t like mass markets for nonfiction, though. Give me hardcovers for that. And I love my iPad for nonfiction shorts, like newspapers, blogs, magazine articles, and the like.)

She wrote an entire blog about her realizations when she got back.

I was going to write a companion blog, but didn’t have much to add that I hadn’t already said in previous blogs. So I begged out of writing my own side of things. I knew that there were other forms and that sometimes we’re blind to them. I just hadn’t realized until the class was over how many times I had already blogged about that very issue.

I was thinking about it, though, and noted all kinds of things in passing, such as a statistic that a country (now lost to my non-filing system) has increased its literacy rate because most people have cell phones and are now using them to buy a lot of books.

And then I got Alive in Shape and Color, and had The Usual Santas experience, and shelved my own limited edition of Protectors. I also have a stunning edition of Alice in Wonderland lovingly illustrated by the late artist David Delamare (another wonderful person lost these last few years) that I supported on Kickstarter a few years back.

When I looked at those books, I realized that they’re all part of the discussion Joanna and I were having. Because beautiful books are possible again too. Indie publishing doesn’t just mean that we have to do ebooks and audiobooks and traditional paper books. It also allows us to do really special projects, like the Protectors limited, or the Alice book, neither of which would have existed without the changes in publishing.

Even the regular hardcover of Protectors is pretty. We’re talking more and more at WMG about doing beautiful books for some of our special projects. I find that beautiful books inspire me, which isn’t really a surprise, considering the fact that Pulphouse Publishing, the first publishing company I started with Dean, was a limited edition book publisher initially.

But neither Dean nor I had the design skills to do a pretty book, like the books that (still) come out of Cemetery Dance or used to come out of publishers like Dark Harvest. We dreamed of it. And, now, with Allyson Longueira, an award-winning designer, on board, we can do more of those books.

But they’re almost the exact opposite of an ebook. The ebook is an inexpensive edition for the casual reader. Some beautiful books are artifacts, not designed to be read at all. (The Alice book is a case in point.)

Last year, I read an article (also lost to the ether) about the way that some musicians deal with their fans. They offer product for all levels of their fan base, from the folks who want stuff for free to the folks who want the most limited collectible possible. Some fans will pay tens of thousands of dollars for one-of-a-kind items.

As writers, we can do that too. We can have the regular formats that Joanna discusses in her blog, making sure we cover as many of those bases as possible. And then we can add extra items, everything from boxed ebook sets (like we’ve done with the first three Diving books) to beautiful limited editions to whatever else might come down the pike in 2018.

I think we’re only limited by our imaginations.

And that, to me, is completely cool.