I’ve been reading a lot in the month of May, but much of what I’m reading is online and ephemeral. I had missed a lot of the ephemeral stuff during the move because I didn’t have the bandwidth for it. Apparently, I do now.

I’ve also been reading some rather large books, some of which are taking time to get through. So this list might be shorter than I want, while next month’s might be longer as I finally get through the big novels.

Anyway, here’s the best of what I read.

Douglas, Scott, “Therapy at Your Feet,” Runner’s World,  April, 2018. Runner’s World is going through a lot of problems. Two editors in less than a year, a new owner, all leave me terrified that the magazine is going to go away. It probably will, and I will miss it, primarily because of articles like this one.

It’s more of a personal essay about the way that running (and any exercise done regularly) can help with depression and anxiety. My mother suffered from severe anxiety. By the end of her life, she was afraid of everything. She wasn’t quite a shut-in, but she was close. It was awful to watch. She drank to cope. There are better ways.

I’ve always suffered from chronic depression, with an occasional side of anxiety, but I discovered exercise early. Walking helped. Running helps more. Swimming helps most of all for me, because I’m such a fish.

Turns out that there’s a lot of science now focusing on the way that exercise, particularly running, doesn’t just boost endorphins but actually changes the way that we think (after you’ve been doing it for a while). Honestly, I think running is the one thing that kept me from getting so ill I couldn’t function at all when I was in Oregon (living near that awful neighbor and dealing with some other issues). I made my daily runs a priority, and they always, always helped—even when the Moose Lodge (yes, really) burned their garbage on my route as well.

If you’re having health problems like depression and anxiety, take a look at this article. Or if you have a family member or friend who is suffering from it. Take a look and consider what Douglas lines out here. It can’t hurt to try, right? 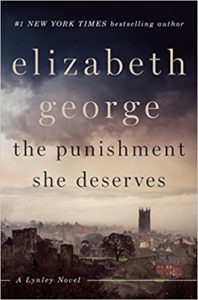 George, Elizabeth, The Punishment She Deserves, Viking, 2018. The first book to arrive at the condo was this one. And I didn’t start it until after the workshop in April, which was me, showing great restraint. I love Elizabeth George’s Lynley novels. I went slower through this one than usual, but I think that’s because she wrote such an accurate portrayal of an alcoholic—from the alcoholic’s point of view—that I (the adult child of two alcoholics) felt a bit unnerved by it. She wasn’t being sympathetic, but the empathy was there, and I balked at that as an ACoA, and understood it as a writer.

That said, I’ve been thinking about other aspects of this book for days. When I went to find the cover image, I read the handful of bad reviews on Amazon. (Only 4% of all the reviews) Most of the reviews complained about the download or the “foul” language or the sex scenes (which were unusual for George, but necessary for the book). One review complained that all of the female characters (except Havers and Dee) were nasty bits of work.

Most of them were, too. For a reason. Look at the title. It doesn’t just refer to the crime, but also to the attitude that everyone seems to be foisting on the women in the book because the women weren’t behaving the way they were “supposed” to behave. All of their bad actions were later explained, and I only disagreed with the outcome of one, but the actions were necessary for the theme of the book which was expressed in the title. Fascinating book.

I love Barbara Havers, as usual. Even though Lynley is the “star” of George’s books, Havers is my favorite character. She’s so hapless and so good at her job at the same time. She’s worth every moment of this novel—all 700 pages of it. 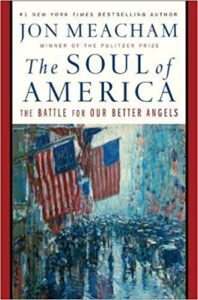 Meacham, Jon, The Soul of America: The Battle For Our Better Angels, Random House, 2018. As many of you already know, I’m so saddened by the changes in this country. I know we’re in a difficult time, and the country is polarized. I also was trained as a historian, so I know that America has survived worse. Battered and sometimes bitter, but the country does come through it.

I’ve been compulsively pulling my history books off the shelves from those time periods and buying other books about those periods, planning to put together something just for me about how this country has come through such utter darkness. I did the same thing with the Great Recession. I read everything I could on the Great Depression.

But I’ve had the move going on and the health crisis, and I got slowed down on my reading, and now all those books I pulled are in boxes marked Kris Library No Order. (The ones that were in order are numbered and ready to be put on the shelf.) So I’ve been floundering.

Then I saw an article about this book. I like Meacham well enough, and thought I’d give the book a shot. He writes about the history of the Republic, focusing on the dark times, the people who helped us survive, and those who provided light in the darkness.

He’s not shy about saying that these people have their issues. He doesn’t flinch, when he shows us the good and bad sides to the people who got us through. As I often tell my writing students when discussing characterization, no one is just one thing. A villain thinks he’s a hero, yes, but he might also be kind to his family or really love someone. He might give to charities. He might think that his cause is justified. (That was one of the few things Avengers: Infinity War got right.)

But Meacham shows here how dark the times were and how the country righted itself in most ways. I have quibbles with the book. He truly operates on The Great Man Theory of history (changed by great men). I do believe in the Great Person Theory of history–individuals can change the way the country/world is going–but not just men. And he worked off an old canon, citing authors who focused on things that were current when I was in school, missing people who would have proven his point, like Ida B. Wells.

But the book is easy to read. It is, at its heart, optimistic, which I hadn’t realized I needed until I saw a review of the book. I ate it up like candy. My reading was truly compulsive. And I knew much of this stuff. He had just put it in a framework that helped contextualize it for me, anyway. Enough that as I read, I would occasional cringe at the religious stuff or the example that I knew was incomplete. No book is perfect, and he’s a different person than I am. But there was enough overlap that the book helped my own spirit tremendously.

If you’re feeling down about the current state of affairs in America right now, you might want to pick this up.