October went by very, very fast. I have no idea how that happened. One day, the month started, and the next, it ended. Part of that was because the Business Master Class was at the end, and required a lot of prep. Next October, we hold the final Business Master Class, and we’ll limit attendance, so if you’re interested, sign up sooner rather than later.

My reading includes about 30 pages of another romance by one of the writers whose work I read for the Romance Workshop and wasn’t sure about. I had hoped, since she was retelling Pride & Prejudice, the problems were with the format. Nope. They’re hers. She can write great setting and great description, but her characters are either TSTL (To Stupid To Live) or complete assholes. And that’s a problem in romance. So she’s off my reading list for any workshop, and won’t be in any future class.

I have reading to start for the Science Fiction Workshop in January, and that too includes some authors I’m unfamiliar with. We’ll see how that goes.

I’ve also been reading a biography of a famous mystery writer, which I was going to recommend, until I got to the section about mysteries themselves. The writer of the biography had some odd opinions throughout, but wowza, this section was xenophobic and racist and classist and almost every other “ist” I can think of. So, while I learned quite a bit about writing and business, I’m not recommending the book At All, and I shudder, because it received so many accolades.

In the meantime, I’ve been on a mystery short story kick. I can’t seem to focus on romance right now, even though I want to. Maybe that’s a sign of how busy my life is. Which is a good thing, but something I have to get used to again. So you’ll find a lot of short stories here and some articles and one novel.

I’ve had better reading months, but when you compare percentage of good fiction to fiction read, then this month improves  astronomically. Before we get to what I liked, I finally decided to move to Books2Read for my links. So no more Amazon only, unless the book is only available in paper or from the publisher.

Here’s what I liked in October.

Barnidge, Sandra Knisely, “Madcap UW Writer Makes History In A Model T,”, On Wisconsin,Summer, 2019. I had never heard of Emily Hahn, until I read about her in this piece but apparently, she is one of “the most prolific and adventurous writers to graduate from the University of Wisconsin.” She had a writing career that spanned fifty years. She was a regular writer for The New Yorker. This particular article focuses on a college trip that’s not so unusual these days, a long drive across country. But in 1924, when Hahn and her roommate did it, it was a true adventure. 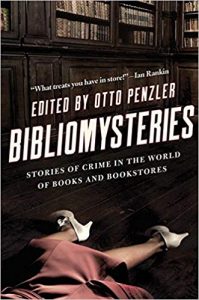 Bell, David, “Rides A Stranger,” Bibliomysteries, edited by Otto Penzler, Pegasus Crime, 2017. Marvelous story about reassessing your parents after they die. And about lost dreams or dreams deferred. And a very sensitive story about writers, English majors, and reading. I found myself thinking about this story for days. Worth the price of the whole volume. 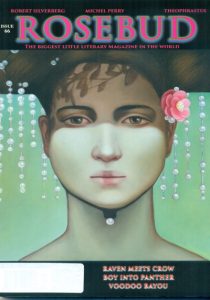 Clark, Rod, “Voice Over: Mystery Weekend,” Rosebud, Summer 2019. Rod writes about the days when he and I lived in the same town. I vaguely knew he was working for Stanton & Lee, a company started by August Derleth, but I didn’t know he had participated in a mystery weekend, complete with a fake dead body and all. His writing is stellar as always, and the story he tells so fascinating that I shared it with Dean. Good stuff.

Connolly, John, “The Caxton Lending Library & Book Depository,” Bibliomysteries, edited by Otto Penzler, Pegasus Crime, 2017. This story won the Edgar for best mystery short story. And while that’s lovely and understandable, it’s really (shhhhh) a fantasy story. It’s about the nature of books and memory. There’s a scene toward the end where our “hero” does something…well, I’d rather read about someone drowning puppies. And still, I loved this story very much. It deserves its Edgar. 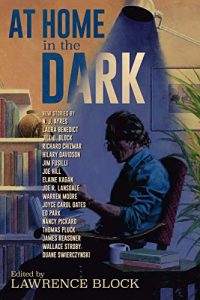 Fusilli, Jim, “The Eve of Infamy,” At Home in the Dark, edited by Lawrence Block, A Lawrence Block Production, 2019. I have only read two stories in this book so far, and I’m enjoying it. But Jim Fusilli’s story is unbelievably good. Maybe one of the best short stories I’ve ever written. He doesn’t miss a beat. Everything is set up and everything is a surprise. I’m not going to say more except…wow.

Lehane, Dennis, “Gone Down To Corpus,” The Mighty Johns, edited by Otto Penzler, New Millennium, 2002. First, I have to tell you that I read the hardcover of this anthology and holy crap is it a mess. Badly designed, and someone, somewhere, decided to run paragraphs together with four spaces between the paragraphs instead of an indent. So if you do want to read this story, get the ebook and pray it’s better than the hardcover.

Recent high school varsity players decide to get revenge on the kid who screwed up (they think) their chance to go to college by ruining the big game. Beautifully written as only Lehane can, the story is compelling and tough and well done. 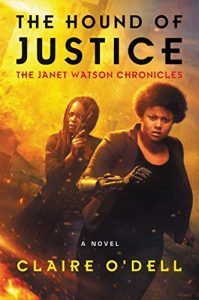 O’Dell, Claire, The Hound of Justice, Harper Voyager, 2019. This is the second book in the Janet Watson series and is much better than the first book, A Study In Honor. The first book had great worldbuilding and lots of wonderful characters and surprises, but such an open-ended ending that it was unsatisfying. I recommended it anyway. because so much of it was wonderful.

This book isn’t as good on that  —oh, I love this—level, because the surprises are no longer surprises. But the story is better and the characters are wonderful. O’Dell has taken Holmes & Watson and made them her own. It took too long to read the book, but that was on me. I was reading during the workshop, and really had no time. If the workshop hadn’t been going on, I would have been unable to set the book down.

O’Dell is a pen name, and the author has written other books, but this series is more to my taste than her other work. I can’t wait for the next book.

“On, Alumnae: Kate Hamilton Pier,” On Wisconsin, Summer, 2019. No author is listed for this short piece about a woman so amazing that I read her biography aloud to Dean. Kate Hamilton Pier’s daughter Kate was accepted to law school, but Mother Kate didn’t think her daughter should go alone, so Mother Kate got accepted too. In the 1880s. Before women could vote. Mother Kate served as judge. Her three daughters all went to law school and, as the magazine says, of the eight women who were lawyers in Wisconsin in the late 19th century, four of them were from this family. Yeah, really. Read about it here.

On Wisconsin, Summer, 2019. This issue of the alumni magazine is devoted to “Our Monumental Women,” and is stunning. I learned a lot, discovered some people I’d never heard of, and found some old friends. I didn’t realize that the women’s studies department was only 5 years old when I joined it, even though I knew it was unique in the country at the time. Amazing how much you take for granted at that age. Most of the issue is online. Browse through it. You’ll learn about wonderful people. (I’m pointing out some good articles here, but not all of them, by any stretch.)