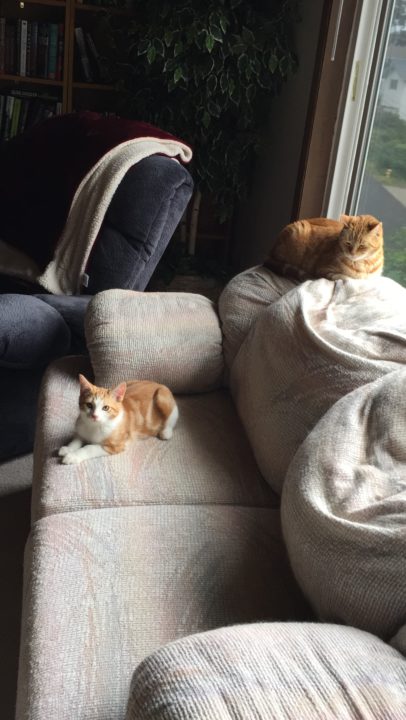 One of the last pictures of Gavin and Galahad together

A note from Kris: Yeah, we should have the next installment of Target Audience stuff here. I got sidetracked on my blog-writing day, and decided to come at the installment later with a fresher mind than I have right now. Also, I did this process blog a few nights ago, and worried that it wouldn’t go up on the website for weeks and weeks. I think it’s better to illustrate my revamp as it happened. Or that’s the theory anyway.

Enjoy this post, and we’ll be back to our regularly schedule topic next week.

My cat died in June. He wasn’t just any cat. He was what Dean and I call “a heart cat.” We have cats whom we love and cherish, and then we have special cats—the ones who simply take over our hearts and hold them hostage. Galahad was the best of the best, and we had him for fifteen years.

I’m telling you this not to get sympathy, but because Gally’s death factored into my process this summer. I knew he was going to go at some point, but he went fast. Fine one week, gone the next. Not as fast as our Ella, who literally died in an instant (vet thinks heart attack or stroke) in February, but still, faster than expected.

That, on top of the deaths of several friends since the first of the year, some close and some not as close as they once were, left me reeling. I hadn’t realized how down I was until I figured out that my writing had nearly ground to a halt.

In fact, the one thing that kept me going was the schedule I had drawn up earlier in the year, the one I wrote about in the second process blog in March. I hit my targets—except the week Gally died, and even then, I was close.

But my targets didn’t stretch me. That’s what sunk in after I lost my beautiful kitty. I realized I hadn’t been working as hard as I wanted to. I’d been dealing with outside issues. I decided to turn inward, deal with my grief and upset while getting back to work. (I process things better when I’m writing than when I’m not.)

My word count returned to its pre-2016 levels. I became happier, except when I realized the orange kitty in my office was Young Gavin, not Galahad. And even then, Young Gavin made me smile. He’s seven months old and promises to be the next heart cat, because he is such a character. He already runs the other two cats ragged.

With the increased production, I finished the Diving novel I’d been working on, and finished five days early. I was going to get to another project on the schedule, and a few short stories, but my brain wouldn’t allow me to. I figured I was simply tired from writing, but I didn’t feel tired.

So I decided to revamp the schedule—and ran into my two-year-old subconscious. (I figure all writers’ subconscious are two years old. They want to play, not work, and they want to do it their way.)

I had planned two more Diving books by year’s end. They’re more or less plotted out. I know where I’m going and why…

I tried to revamp the schedule keeping Diving on board, decreasing word count on the novel(s) and going to the brand new thing in my spare time, but nooooo. Subconscious wasn’t having it.

Besides, I had promised a bunch of short stories, and I wanted to write several more, and doing only one per month (as I had at the front of the year) wasn’t going to work on the back side. I got in trouble in late May when I tried to shove an extra story into the schedule. I managed, but it was a close call, and I realized that wouldn’t work again.

So, I just spent tonight reworking the entire next six months schedule. I started with an I Wanna list, especially for my inner two-year old. She got to write down everything she wanted to do.

Then my adult self added everything that I had promised to do.

Surprisingly, I hadn’t added a lot. Seems that I wanted to do what I had promised to do, at least most of the time.

I then made a second list—short stories by deadline. Turns out I had promised 13 of them before the end of the year. Writing down the deadlines meant that I had to finish three in some months, two in others. The deadlines weren’t just vague ideas in my head.

Then I went through the same process I used the first time. I figured out how many writing days I had in the month, minus four days per month for the blog, and inserted the short stories. The leftover days were for novels.

It took a while (including about ten minutes to deal with Gavin, who insisted on squirming his way across my lap and keyboard and desk and pens and paper, purring the whole time. It’s hard to be sad when a kitten purrs while creating chaos…and eventually falling off the desk). I checked and double-checked my days, my teaching schedule, my time off, and my other obligations.

But, if I hit my targets—and I seem to be good at that with this new process—I will complete three more novels, all 13 short stories, and a few special projects I’ve wanted to do.

And, my two-year-old kindly added January to the mix. She pointed out that it would be Just Fine to finish that Diving novel then. It sounded like fun to write more Diving in January—to her, anyway. I guess she figures she won’t be bored with sf any more.

I knew I would have to revamp the schedule halfway through the year. I got derailed a bit by life (or rather, death). I decided to put off the reschedule until I finished the novel in July…which I did just a few days ago. And then I revamped. Twice. Three times.

Now, I’ve finally come up with something I like.

An ambitious schedule. I’m ready for it, and excited about it.

And gosh! When I finished, I decided to blog about it.

I’m not even counting this blog toward my totals, although I appear to be banking some blogs ahead, probably for a few tough weeks in the fall.

And so is Gavin.

This weekly blog is reader funded. If you feel like supporting the blog on an on-going basis, then please head to Patreon.

If you want to show your one-time appreciation, the place to do that is PayPal. If you go that route, please include your email address in the notes section, so I can say thank you.