Another New Story And A Tiny Bit More

Another New Story And A Tiny Bit More 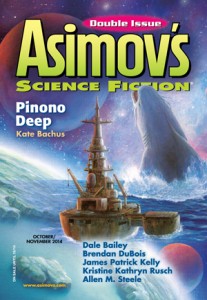 My latest story, “Playing With Reality,” has just appeared in Asimov’s October/November issue, with lots of other wonderful fiction. I personally can’t wait to dig into the issue. The writers I know in this volume are favorites, and I suspect the writers I don’t know will be new favorites. I love what editor Sheila Williams is doing with the magazine.

Anyway, my story is dedicated to Mike Resnick, because he’s always been so supportive of my career, but not just because of that. He inadvertently gave me the idea for the story. He calls my husband the Golf Geek because Dean used to be a professional golfer. Then, Mike invited me to be a part of The Worlds of Edgar Rice Burroughs which he was coediting with Robert Garcia. I decided to do Tarzan. Well, not “do” Tarzan, but write a Tarzan story. You know what I mean. 🙂 And the first story I thought of was this one, which is clearly not what Mike and Bob wanted. I wrote the story to get it out of my system, changed the names to protect the writer, and sent the story to Sheila, who promptly bought it. The story’s called “Playing With Reality.” (You can also get my real Tarzan story, “Tarzan And The Great War” in the anthology.)

The tiny bit more I promised you? More videos on the Fiction River Subscription Drive Kickstarter, featuring lots of excellent authors talking about Fiction River, their own work, or reading one of their stories. Head on over. The drive has moved from financial goals to seeing how many subscribers we can add this time. I know a lot of you have heard about Fiction River for the first time in this drive, and so ordered a single copy before deciding to support the Kickstarter. If you liked your single issue, now’s the time to subscribe. The deals on the Kickstarter are tremendous and won’t be repeated. Plus, one person can get a new Kobo device, along with all the back issues of Fiction River, and a full subscription for one price. (That’s perfect for someone in Europe or Australia or somewhere else outside of the U.S.)

I know I promised a Retrieval Artist update last week. I’m powering on the climactic section of the last book, and it’s hard to take time to do this. So what do you want? An update? Or the final book in June? (Actually, you’ll get both, but I’m not sure exactly when I will write the update. Soon, I hope. Now, for me, back to work!