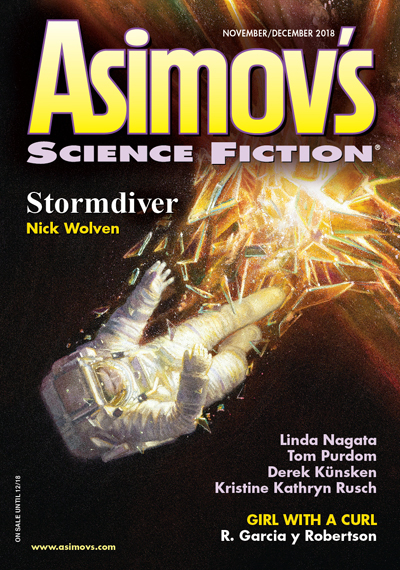 I’ve been remiss in letting you know about various publications. I’m not quite sure where I left off, so I’ll do my best to catch up.

One reason I got so far behind is a super-huge Diving novel that I finished in September. I still have some assembly to do, and then you’ll have even more news about it.

I write out of order, and I struggled with that novel like I haven’t struggled in years. One reason was that I couldn’t quite figure out how to attack the story. It wasn’t until I wrote “Joyride” to explain a character to myself that I had a hook on the novel.

“Joyride” stands alone. It introduces a character we haven’t seen before. And it’s one of the most important parts of his life.

You can read an excerpt on Asimov’s SF Magazine‘s website. The story is in Asimov’s November/December issue, which you can order (in ebook or paper) if you go here.

If you want to find out more about the story before or after you read it, head to the Asimov’s blog, and read the piece I wrote about writing it.

And yes, Diving fans. There will be more news on the book when I have it. (As well as the next Boss novel.)

One response to “A New Diving Story”