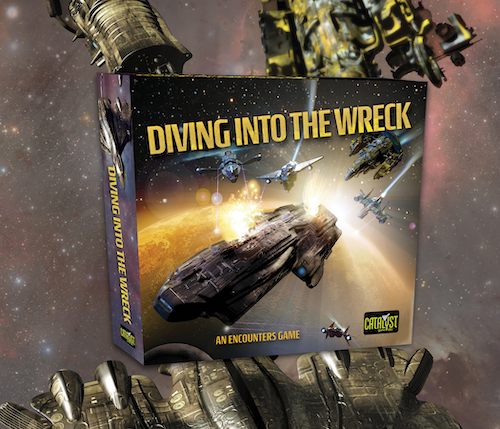 I’m pleased to announce that I’ve partnered with Catalyst Game Labs to develop a Diving Into The Wreck Game. This game is a card & dice game that will allow you to adventure the way that Boss and her team does.

Here’s the information on the game:

DIVING INTO THE WRECK

Gear up, check your lines, and prepare to descend into the latest wreck discovered by Boss and her crew of salvage experts. Build resources, explore lost ships and abandoned space stations, and hopefully escape with something more than your lives.

A cooperative push-your-luck encounters game. Players use a set of six dice to defeat a “storyline” of Challenge cards, hoping to discover deeper secrets as they go. Accrue and spend resources, watch each other’s back, and solve each phase in time to escape the final challenge.

The Challenge cards below are just mock-ups right now. We’re figuring out all the various things that can go wrong (he-he-he) to complicate your dive, and will have very specific cards in the game. 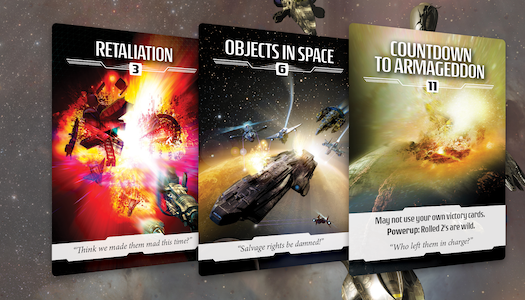 Right now, we’re offering the game as a new reward in the Diving Universe Kickstarter. That Kickstarter has 11 days left. The game is only $10 in the Kickstarter, but will retail for $11.99 when it’s available on WMG’s website and Catalyst’s site.

If you’ve already backed the Kickstarter, thank you! And if you want the game, just go back in, and change your pledge by making the game an add-on. It’s pretty simple.

Here’s how you get to the Kickstarter: http://kck.st/3jRjlBP

If you have gaming friends, let them know about this–and that there’s a free novella they can get right now in the Kickstarter itself.

We added other new rewards, like some extra hardcovers for people who like their books in paper. So read through everything before clicking on anything.

And one more really important point: we’ve hit three stretch goals so far. That means anyone who backs over the $5 level will get an ecopy of Thieves early, as well as two novellas (one new!), an anthology, a Diving Zoom background, and a pop-up writing workshop on how to write a novella ($150 value).